Microsoft has had a busy couple of weeks with a large amount of info coming out at X018 last week, and now the release of the Nov '18 Xbox Update today.  The biggest addition is support for keyboard and mouse, with Fortnite being one of the first titles to get it (per Mike Ybarra Microsoft VP for Xbox) on his twitter feed earlier today.  In addition, updates for Xbox Skill for Cortana and Alexa, Amazon Music app introduction and expansion of Search were introduced.  You can check out all the details at the link above, or I have brought them over and posted below:

Mouse and Keyboard Support for Xbox One

Announced at X018, Fortnite will be one of the first titles to support mouse and keyboard input, matchmaking players using the same input together with one another to ensure a fair and fun experience for everyone. Fortnite’s support for keyboard and mouse launches alongside previously announced Warframe via today’s update, with Bomber Crew, Deep Rock Galactic, Strange Brigade, Vermintide 2, War Thunder and X-Morph Defense adding support in November, and Children of Morta, DayZ, Minion Master, Moonlighter, Vigor, Warface, and Wargroove adding support in the future.

Additionally, we’re partnering with Razer to offer gamers a premiere mouse and keyboard experience through an all new Razer-created ‘Designed for Xbox’ mouse and keyboard. Built from the ground up for gaming on Xbox One and Windows 10, it will come equipped with a dedicated Xbox key, and support for the new Xbox Dynamic Lighting capability – enabling immersive game-controlled lighting effects.

Launched in the U.S. last month, the Xbox Skill for Cortana and Alexa allows gamers to get more done using just their voice. This feature will continue to grow and improve over time, based on fan feedback. Coming this week, we have the first set of updates:

*Alexa Beta for the U.K. (EN-GB): The Xbox Skill for Alexa is now in Beta for all Xbox gamers in the U.K. with the addition of U.K. English voice recognition. To get started with Alexa, just say, “Alexa, open Xbox.”

*Cortana improvements: In the U.S, the Xbox Skill for Cortana becomes easier to use. Cortana will automatically discover and pair your Xbox, so there’s no need to login. Just say “Hey Cortana, pair my Xbox” to any Cortana device (mobile phone or Harmon Kardon Invoke speaker). Try your favorite commands, like “Hey Cortana, start Netflix” or “Hey Cortana, pause my Xbox.” Get started with the latest Cortana on Android or Cortana on iOS app this week.

*New Commands added: In response to fan feedback, we’re adding a few new commands to both the Cortana and Alexa skill. Now, you have the ability to fully close a game or app via “Quit [game or app name]” or use your assistant as a controller with our new navigation mode. This lets you use your voice to hit the “A” button or navigate around your console (e.g. up, down, left, right, A button, B button). Just say “Start navigation mode” or “Press [button name]” to try it out!

Amazon Music is launching a brand-new app for Xbox One in the U.S. on Nov. 14th, with availability in more countries coming soon. The Amazon Music app for Xbox enables Amazon Music Unlimited subscribers to stream more than 50 million songs and thousands of playlists and stations through their Xbox One family of devices. Prime members can also use the app to stream more than two million songs and hundreds of playlists and stations at no additional cost to their membership with Prime Music. Download the new Amazon Music app from the Store today!

We’re expanding search to include results from Xbox Assist and games you have “Ready to Install” or currently own as part of your memberships, including Xbox Game Pass, EA Access, and more! This makes it easier than ever to find the game you are looking for and start playing. 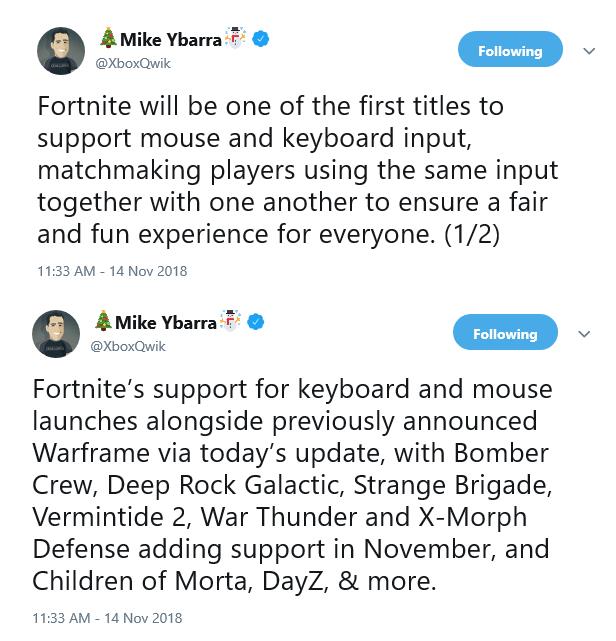