Before the B.E.T.A. launched a few weeks back, Bethesda issued a letter to fans that read like a warning to temper their enthusiasm as well as expectations as players worked their way through the world of Fallout 76.  I saw plenty of reactions, including many negative ones online as Bethesda pretty much stated its a new thing for them and to expect issues.  I personally had not problem with it and saw it for what it was, admittance that they have a work in progress creating a vastly different Fallout game than anything ever done before.

Today, Bethesda dropped another letter on Twitter and the official site that thanks all of the people that participated in the C,.E.T.A as well as talks briefly about what is being worked on for the launch and future.  It's a nice gesture for the many folks that put time into the game.  I ma sure there will be bugs, and issues and other things to still be worked out, but that is the world we live in now.  Have a read and enjoy the game on Thursday morning when it launches.

It’s with great excitement that we’re finally launching Fallout 76, a Fallout game unlike anything we’ve done.
Really, it’s a game unlike any we’ve ever played.

It’s been our privilege and passion to build games that transport you into new worlds and new experiences. With Fallout 76, we’ve woven together parts of our past Fallouts, the survival genre, and massive online games, to create something unique. A game where you share in the story and the struggle to survive, with your friends, with strangers and with us.

A huge thanks to everyone at Bethesda and ZeniMax who supported us in making this game. Creating a new style of game has taken the best from not just our own producers, programmers, artists and designers – but great efforts from across the company. Special thanks to our friends at ZeniMax Online, id and Arkane who helped us. And thanks to everyone in publishing, IT, Bethesda.Net, Customer Service, Admin and our incredible partners in QA.

And a special thank you to all our fans who participated in the B.E.T.A. With your help we’ve made the game better each week. And this is just the beginning. We have an incredible list of updates we’ve begun work on – from C.A.M.P. building improvements, new quests and events, new Vaults opening, character respecing, a faction-based PvP system, and much more.

We hope your journey in Fallout 76 is as fun and rewarding as it was for us to build it. We can’t wait to see where the country roads take you.

All our best,
Bethesda Game Studios 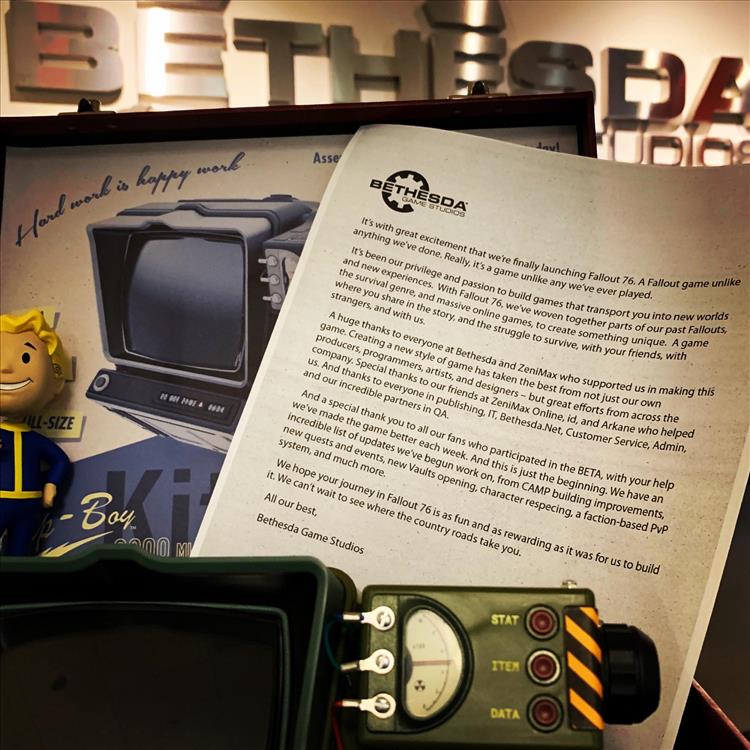