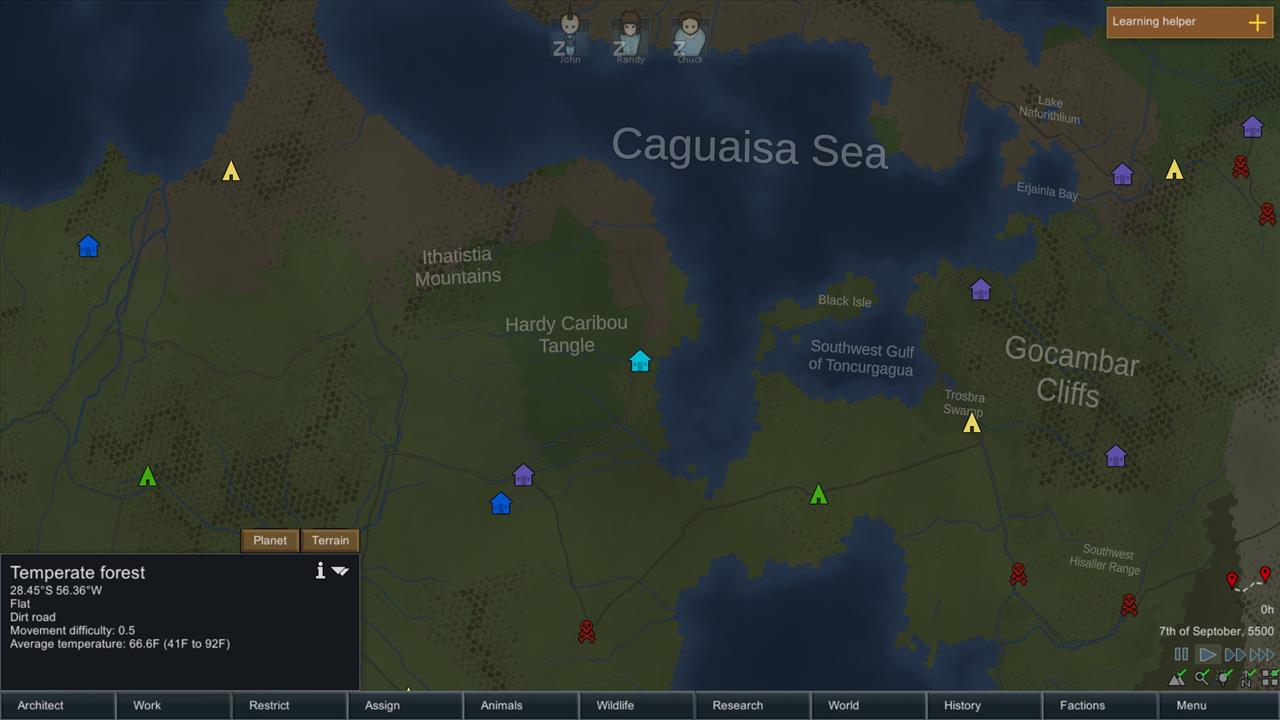 We crash land where a dirt road crosses a river flowing down from the Ithatistia Mountains, through the Hardy Caribou Tangle rainforest, and spills into the landlocked Caguaisa Sea. Don’t worry: I can only pronounce a few of those randomly generated names, too. Regardless, this is where my three unwitting colonists must indeed gather their wits, their scattered supplies, and make a temporary place for themselves. This is RimWorld. And this is not their home.

I randomly throw together my three survivors, whose names and likenesses to anyone on the Gaming Nexus staff is purely coincidental.

There’s John Yan, human computer, too smart for his own good, and can’t move too well considering his bad back and the old gunshot wound in his neck. There’s Chuck Husemann, mindless construction drone, passionate about building, but as always seems to come up when I pick a random character and name him Chuck, he’s a pyromaniac. Then there’s Randy Kalista, space bartender who’s kind but has a bloodlust that contradicts that. 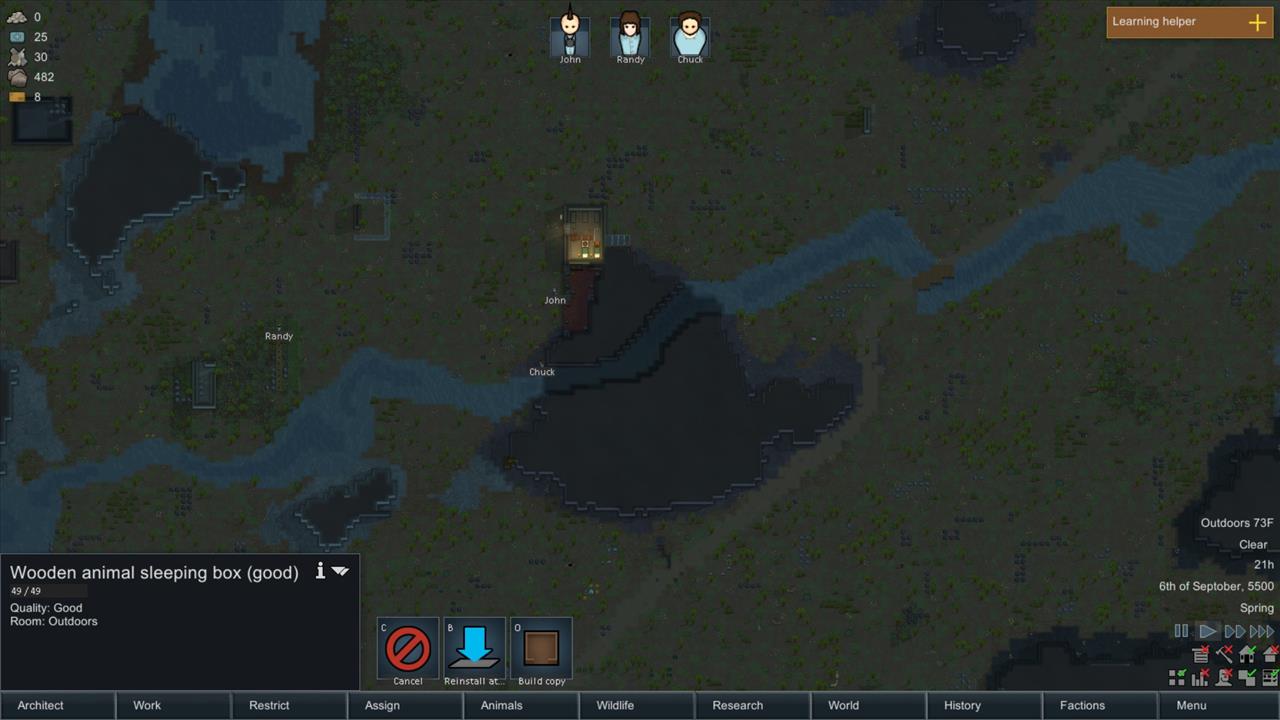 This part is already most of the fun of RimWorld for me. Getting a crop of random folks with random backstories and traits, health problems and skills, then naming them after people who would certainly be a little uncomfortable knowing you’re about to film a season of digital Real World with their likenesses. Every group of survivors has to build shelter, forage for food, and, in general, survive. But it’s these drawn-from-a-hat character sheets that will make up the story of your RimWorld colonists. When John Yan refuses to clean because he grew up a child star, or when Chuck Husemann loves animals but isn’t great with them, or when Randy Kalista cultivates a love of medicine but it always sick anyway…

That’s where the cream rises to the top in RimWorld. More than just being a survival sim, this is a story generator. Where even simple actions start to paint a clearer picture of who your people are. Little acts of kindness or rudeness can enliven or dampen a colonist that’s absorbed too much and is ready to break. Where the cook is as important as the hunter, and where the construction worker is as important as either of them. 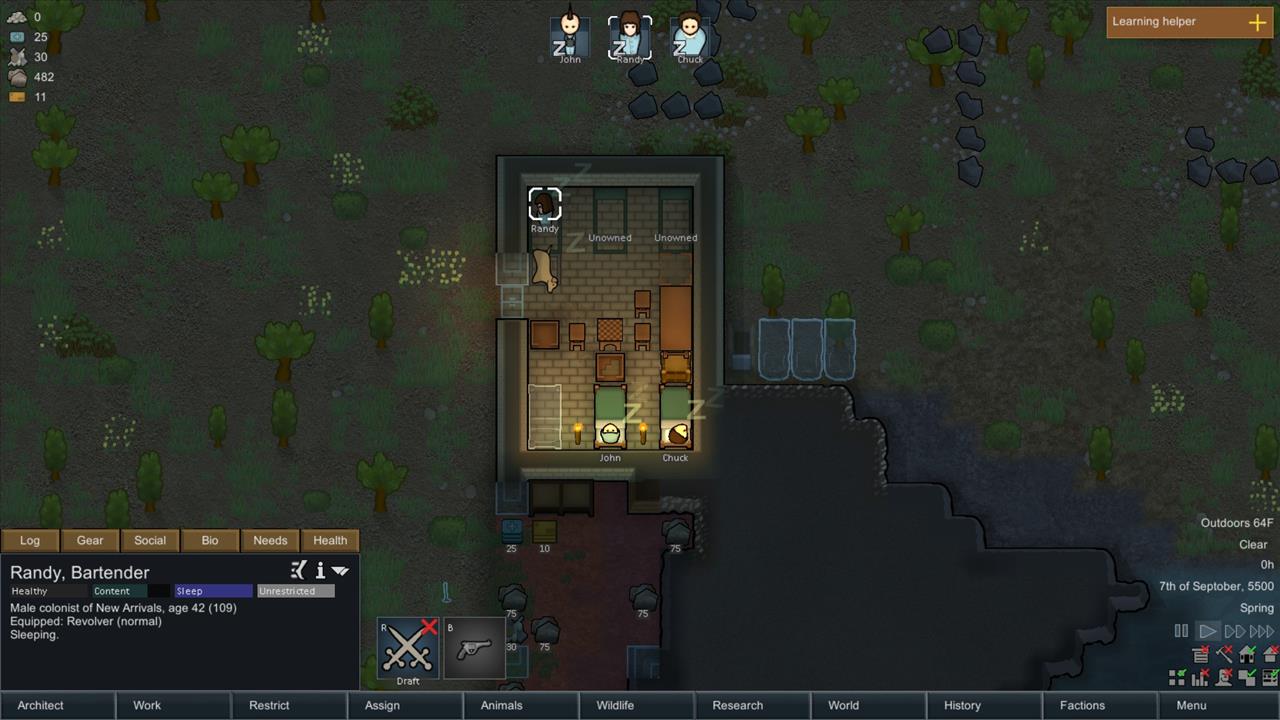 I know what you’re thinking, though. I thought so, too: this game looks gross. Not gross as in gory, unless what’s affectionately referred to as “programmer art” somehow slips past your artistic receptors and doesn’t give you a negative physical reaction like it does to me. If that’s true, and RimWorld isn't one of the ugliest games you've seen in years, if I were you, I’d be prepared to admit that I’m some sort of aesthetic masochist or at least a creative atheist.

No matter. Eventually that unshapely arrangement of poplars and oaks will emerge in your mind as a temperate forest. You’ll find a certain beauty in the shallow swathe of blue river that cuts through a Minecraftian cavern. And that weirdly straight arrangement of slate chunks turns itself into a rockslide where a herd of a dozen gazelles sit in the cool spring air. Other than that, the country guitar plucks out a Firefly-like tune, making the horizon seem like it could go on forever, even if it really is just a square of a few hundred yards by a few hundred yards.

This is where John, Chuck, and Randy will build.

First thing’s first: assign weapons. I’m playing on medium-low settings, but the storyteller will eventually ramp up the encounters. It’s better to put a rifle in John’s hands now before the inevitable mad squirrel attacks anyone it sees and rips through the colony, or a herd of ibex figures it’s had enough of John’s poaching and avenges their dead. Besides, Randy might love shooting, but he’s only half as good with a gun as John is, and Chuck won’t even touch the things, let alone shoot one. John, my rifleman now, also gets the full set of flak gear. That’s a new feature to me here in RimWorld 1.0. I’ve never been given armor right off the bat.

So, John, with his spiked hair and zero empathy skills, gets fully armed and armored. This idea will probably come back to haunt me later, but if he’s going to be out there hunting, I want him to be able to take a hit or two from that Giant Sloth he’s taking down.

Next, find or build shelter. There happens to be a nearly complete limestone building here, butted up against a granite hill. They’ll take it. There’s also some rich soil a stone’s throw away. I’m sure Randy will start growing a row of “medicinal” herbs immediately--along with some potatoes, if he knows what’s good for everyone’s survival.

Chuck immediately gets to work building shelter, being the hiveworld drone that he is, with a +4 in mining and a +5 in construction. We’ll just have to watch out for his mental well-being, of course, or his pyromania will surface and he’ll burn it all down.

John doesn’t seem to do much of anything, but he and Randy did find out that they have “shared beliefs on the link between romance and religion.” Am I scratching my chin right now as I read that? Yes. Is it an awesome storytelling detail anyway? Absolutely yes. But don’t worry. Chuck isn’t a complete automaton. He and Randy shared a word about...shrubs. And about learning chess. Nothing too deep. But hey, it’s still the first hour of the first day on this planet they crash landed on. Thanks to Chuck’s prompting about chess, I’m seeing a notification on the right-hand side about needing some recreation. It’s sunny and clear, everybody just came down in emergency escape pods from their spaceship only moments ago, but hey, sure, let’s get a game of horseshoes going, guys.

Oh, they also have a golden retriever named James. I’d rename him Video James if I could, but the game won’t let me. He wanders around accomplishing about as much as John does. John fords the river, wandering between piles of resources and the limestone lodge, but due to his child star upbringing that I’d mentioned earlier, he still refuses to haul anything. He’s incapable of “dumb labor,” his bio says.

Randy’s green thumb is showing. The second I suggested a couple growing zones in some rich soil, he practically sprinted over there and started a couple rows of potatoes and “healroot.” All of which will come in handy. Though there’s some wild healroot growing right there, Randy can’t ignore his passion for growing things himself.

Chuck is a madman when it comes to construction, however. It’s the first nightfall and he’s already built a roof over everyone’s head, fully built two out of three beds that they need, a place for the dog to sleep, a passive cooler, a dining table, two stools, and just slapped together a masterwork chess table before crashing for the night. Everybody else follows suit with the sleeping part.

There is so much more to do. So much more. But it’s always these early days that excite me the most. Those first crucial hours of survival, before the game starts throwing increasingly ludicrous scenarios my way, before John, the child star, has a nervous breakdown which he will inevitably do, before Randy falls so sick he can’t even cultivate his medicinal plants.

But when all that stuff happens, it’ll be great, too. In RimWorld, losing is the other half of winning. And just because something goes “wrong” doesn’t mean everything’s done for. RimWorld is a land where challenges transform into opportunities. Where passions become projects. Where a depressed and heavily armed John woke up and now only wanders back and forth from the graves behind the house to sitting inside and playing a one-person game of chess. Only after speaking deeply about tribalism with Randy did John break his routine, follow Randy for a little while, then lay on his back by the river to do some cloud watching.

Man, RimWorld is still the ugliest game in my Steam library. I wish I was lying to you, but I’m not. But all I had to do was give it a chance, and the ugliness stopped mattering. The short stories are what matter most. That’s what RimWorld delivers.