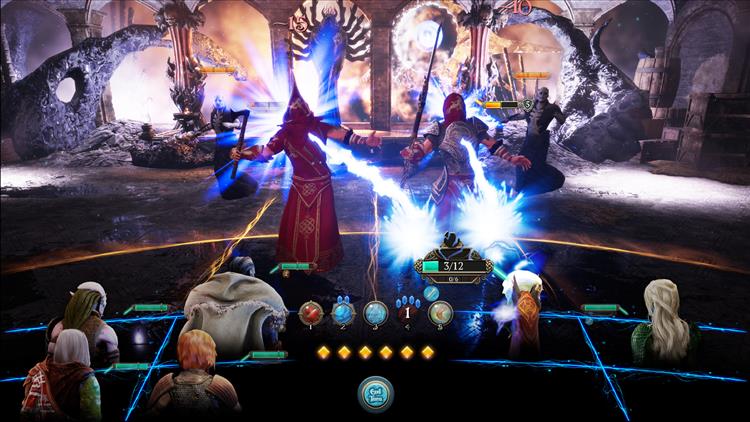 Gambling regulators from 16 agencies will look at the "blurring of lines between gaming and gambling"—but no, they already affirm that loot boxes are not considered gambling under national laws. Marriages fail for a lot of reasons, and 200 divorces this year have cited Fortnite addiction as one of the causes; but as a frame of reference, there are upwards of 800,000 divorces each year in the U.S. And here are a few factoids about gamers compiled by the Pew Research Center, like what percentage of teenage boys play video games—but wait till you see what happens after age 50.

Russell Archey
I'll be spending my time this weekend going between a couple of games. Last month I finally broke down and picked up a PS4, so besides playing Naruto to Boruto: Shinobi Striker for my first PS4 review, I also started up Horizon Zero Dawn and have been enjoying that. Then I got the chance to review Mega Man 11. For those who don't know, I'm a huge Mega Man fan. I've already cleared the game once, so now it's just a matter of going through the challenges. Then I'll probably play through the game again to see if I can clear it any faster now that I'll know what to expect. That's the speedrunner in me talking.

Kinsey Danzis
I’m starting the Mayan apocalypse in Shadow of the Tomb Raider, because it was only a matter of time before Lara’s “take what you want and somehow end up blowing everything else to kingdom come” approach to archaeology blew up in her face. Off the bat, I think I prefer Rise of the Tomb Raider on the history front. It just seems so much more thorough in that respect, but I’m biased as a history student. But in terms of dialogue and main characters, Shadow of the Tomb Raider wins by a landslide. I love the dynamic between Lara and Jonah, as well as how natural their conversations sound; it adds so much more color to the beginning of the game. Plus it’s lovely to look at. The jungle setting is vibrant, and the tombs—though I wish they had a stronger historical narrative behind them—are fun to explore, and seem so much more open than Rise of the Tomb Raider. It’s just a great game, even though I’m only 9% in.

Dave Gamble
It’s another one of those awkward weeks when I find myself recovering from a recent addiction, but can’t seem to find a new one. A couple of reviews broke me out of my previous routine, but I have yet to start another. This is all just a new way of saying my usual: Project CARS 2. I know I say that a lot and it probably sounds like the same old thing, but there is so much breadth, and in some cases depth, in cars, tracks, and racing eras in PC2 that it never really gets old.

Eric Hauter
I am planning on settling in for a few long sessions with my PlayStation VR this weekend. While I am still having a hard time setting aside Firewall: Zero Hour while I finish up that belated review, I am actually looking for Transference to be the game that breaks me from my Firewall addiction. Newly released by Ubisoft and Elijah Wood's studio, Spectrevision, Transference is an interesting mix of full motion video and VR escape-room puzzle gameplay. The conceit of the game is that players are toying around with a new technology that allows them to experience the memories of others. So, naturally, the scientist in charge of the experiment records the memories of a patient with PTSD. What could go wrong? I played through the demo this weekend, and found that the visuals and audio combined to create quite an eerie atmosphere. One moment in particular scared the pants off of me, and the scare felt well-earned due to the overall mood of the piece. Look for the review sometime in the coming weeks.

I'm also still dorking around in the wastes with Wasteland 2 on the Switch. That's going to continue on for a while. Although my score for the game was a little low due to technical issues, I'm still really enjoying exploring around and cleaning up side missions. I am also enjoying the stabby-stab character that I based on my daughter, and feel like she might be the model for characters I create in other games going forward. Blade-wielding berserker five-year-olds are hugely entertaining.

Randy Kalista
Divinity: Original Sin 2 – Definitive Edition pretends to have wide-open tactical gameplay, but it's quite the opposite. You have to learn to play with the developers' very specific rule set, and to cheese the AI whenever humanly possible because the AI will certainly cheese you. I've run into enough glitches on the PS4 that it's become a way of life: enemies I can't target because they're clipping through doors, getting pinned against walls when there should've been 180 degrees of escape, chandeliers hanging high above somehow blocking movement and attacks underneath of them, and I swear, my warrior missing 100 percent of his swings that should have an 80 percent chance to hit. Even XCOM is like, C'mon, bro. The characters are all Dickensian villains—even the good guys—which can be fun, but the tactical game is often hosed with bugs, at least on PS4. I'm firing up the PC version to see if the same issues crop up there.

Dan Keener
With my key for The Bard's Tale IV showing up, I know where my free time will be spent.

Nicholas Leon
Playing what I could of the Battlefield V Beta, I've decided to hop back into Battlefield 1, before the wave of change inevitably crashes on the shores of a new dawn on this multiplayer franchise. Lofty metaphors aside, the game continues to astound. Pretty much all of the main expansion packs have been released for free by DICE, much the same as they did with Battlefield 4, and the game is still getting updates and new weapons, even though those will probably thin out before too long. Coming off the BFV beta, it's amazing how far this game has come. While I noticed some similarities in how the game's looked—BFV, for instance, was so damn beautiful I could barely tell what was happening—BF1 really does have its own unique aesthetic, the WW1 setting undoubtedly factoring in, what with the combination of modern arms and military clashing with 19th Century architecture and ways of life; see the farm house on River Somme engulfed in flames in pretty much any round of Conquest Assault. There's not that much new I can say about the game, other than the fact that it really has grown into one of the most unique modern multiplayer shooters of its era.