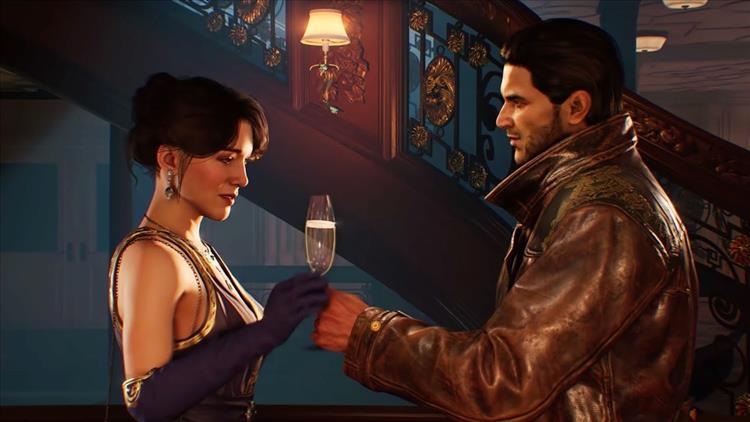 The next Great American Novel will be a video game—though you might've already played it. GameFly was already planning on shutting down its streaming service, before the EA acquisition happened. And Elon Musk is adding classic Atari games like Missile Command and Pole Position to the center touchscreen in his Teslas.

Zachary Atwood
I'm just straight overloaded with games to play right now. I've been playing way too much Smite recently, but it's just the game I can never seem to quit. Fortnite's also back on my radar, as watching the Summer Skirmish these past few weeks has given me an itch to play the game again. With the release of Monster Hunter: World on PC and We Happy Few this week, I'll have a busy weekend ahead of me. I'll probably find some time to try out the Black Ops 4 beta some more, as it was good fun last weekend and I'm looking forward to what changes are coming this weekend.

Kinsey Danzis
For months, my poor, poor copy of Assassin’s Creed Origins was sitting on my shelf, plastic-wrapped and untouched; I fully intended to play it, but life got away from me around every corner. Now, though, I have an excuse. I’m helping out with a course at my university for incoming freshman, primarily those interested in history, that covers how history interacts with video games as a medium—how history is represented and recreated, how the blanks are filled, how fact reconciles with fiction, and all that cool stuff. Origins is one of the first games of the syllabus, and to be honest I’ve spent most of my time in the Discovery Tour. I got to explore the interior of the Great Pyramid at Giza, inspect the sarcophagus of Khufu (which may or may not have ever been occupied) and set foot in the Library of Alexandria, which I’ll admit without embarrassment nearly brought me to tears—because, come on! They recreated the Library of Alexandria, one of the most devastating losses of knowledge in all history, and we can enter it for the first time in millennia!

Dave Gamble
I've circled back around to Far Cry 5, but more specifically to the Arcade section. I enjoy the bite-size "missions" and the inventiveness of the folks that are using the map editor to build little tiny worlds that are far more than the sum of their parts. I started by playing the Highest Rated maps, but I am also finding a lot to like (and an equal amount to dislike) when I order the maps by Most Recent. Some of the creativity gets watered down a little bit due to limitations in the map editor, primarily with respect to audio. It's a shame to see/hear a painstakingly created WWII venue ruined by the standard FC5 trash talking from the NPCs. In fact, that has gotten so tiresome to me that I resent it even in contemporaneous maps. I mitigate my irritation at their incessant chatter by timing sniper shots such that they don't finish whatever rant they had begun. On the plus side, I really like the game mechanics that allow me to crouch behind cover and pop up for a shot just by hitting the right side mouse button. The AI can be resoundingly stupid, but some of that comes down to map developers not taking the time to configure them to behave at least somewhat rationally, but mostly it's just some gaps in the platform. For example, I have long since stopped worrying about hiding corpses - the surviving NPCs really don't seem to care about them all that much.

I mentioned last week that I was going to enjoy some online multiplayer with my son-in-law, but that got postponed until this week due to problems he was having with his Rift. Once instructed to just bite the bullet (so to speak) and remove/reinstall both Oculus and SteamVR, he got it all working again. As was I, he was very reluctant to remove Steam until I assured him that he wouldn't have to reinstall all of his games. To be honest, I couldn't remember if that was true or not, but hey...no harm, no foul.

Eric Hauter
I am playing a number of very different games for review this week. Another World, the SNES classic adventure game, has been given a really great remaster on Switch. Included with the insanely difficult gameplay is the ability to toggle the original graphics and the newly remastered graphics. You can tap a button and flip it back and forth between the two. This is a game that 100% stands the test of time, and looking back at the original graphics, I simply can't believe that they got this thing running on the SNES. Some miracle of engineering, that.

I'm also playing Detached, a VR science fiction title. The game was originally designed as a multiplayer competitive game, but sadly not much of a community has sprung up around it, so I haven't been able to engage with it on that level. I have been playing the single-player campaign that was added in, and that aspect of the game is very engaging, but slightly nauseating.

And lastly, I picked up an awesome little RTS title on Switch, Crush your Enemies!. Crush your Enemies! (that exclamation point is theirs, not mine) has a great streamlined approach to RTS, and some great pixel-art/cartoonish graphics, but neither the streamlining or the cartoonishness should dissuade RTS fans from checking this title out. The strategy is real, and the battles can be mighty tough. I'm enjoying this one greatly, and after I play some of the multiplayer, I will be ready to review the game in full.

Randy Kalista
Right now the main thing I'm playing is the new Red Dead Redemption 2 gameplay trailer on repeat. I hope, just like in OG Red Dead Redemption, I can kill the HUD, bury the minimap, and get real cozy with navigating by landmarks. Other than having a HUD-less mode on my wish list, I like 100 percent of everything I'm seeing there. We're about two-and-a-half months away from launch, but I can already hear my wife spinning up her "Widows of Red Dead Redemption" Facebook group again.

No Man's Sky NEXT is the game of the summer. In fact, it's here to mess with my entire 2018 Game of the Year list, too. I'm finally fully satisfied with my purchase. The universe is much less lonely now, but that actually has me searching for those lonelier 2001: A Space Odyssey moments even more. Yes, the mining and crafting has gotten a bit overblown for my taste. Though I'd complain louder if the exploration and space photography hadn't gotten 1,000 times better, too.
That Red Dead trailer though. Yeah buddy.

Nicholas Leon
I’m getting back into the Black Ops 4 beta this weekend (it’s still on, right?). In between new jobs and writing, I haven’t had a whole lot of time for games recently, but one thing I love about the beta is the fisticuffs. Seriously, there’s nothing greater than surprising some decked-out player with a jab to the face. Unfortunately, most of the time they’ll actually get the drop on you first, but it’s still a blast.