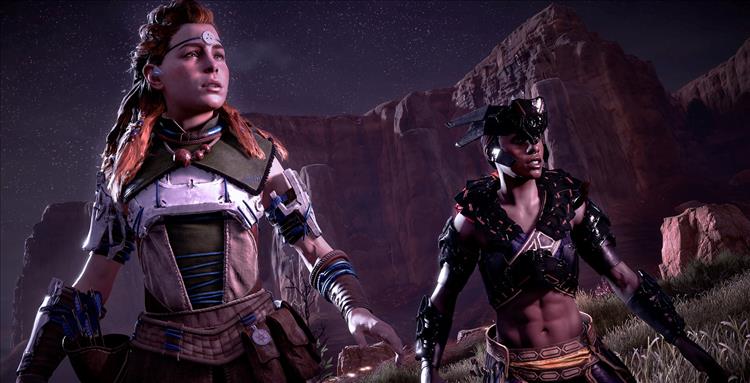 EA invited 10 girls to a week long workshop, designed to encourage more women into video game development. A spelling mistake is at least one reason why 2013's Aliens: Colonial Marines has a 40-something Metacritic. And here's a completely unofficial Uncharted short film starring Nathan Fillion as Nathan Drake.

Zachary Atwood
I have to be almost done with The Witcher 3. Honestly, I thought my most recent full day of play was wrapping it up, but there's somehow still more. I've taken a few days off from that, but I'm sure I'll be back into this weekend to try and finish it off. In other areas, I enjoyed the Overwatch League playoffs enough last week to reinstall Overwatch and give it another shot. Unfortunately, I still find the game almost impossible to play casually, so it dropped off my radar after a couple hours.

Warhammer: Vermintide 2 still has my attention, but I've been saving it for the weekend so I can get some longer sessions in with the buds. Other than that, I just started my playthrough of Stifled for my review, and should be wrapping it up this weekend. While I'm not playing games, I'll be tuning into a bunch of different esports events this weekend. Between Overwatch League playoffs and Fortnite tournaments, I'll have no shortage of competitive gaming content to keep me occupied.

Kinsey Danzis
In the few days left before I enter a period in which I both am a full-time student and have four jobs, I'm enjoying my latest irresponsible purchase—my gold PS4—by way of Horizon Zero Dawn. It's stunning. Amazing. I've had a couple days off in a row, which was a rare treat in and of itself, so I've already sunk hours into this game with no signs of being bored. The visuals and soundtrack are incredible. Aloy is gorgeous, and she's portrayed (mostly) like a real woman instead of a Photoshopped model.

I know I'm late to the party, but I have exactly one complaint about this game, and it's one I noticed right off the bat: cultural appropriation, especially with Native Americans. Come on, Guerrilla Games; you could have found another way to execute your amazing vision for the Nora without using terms like "braves," "savages," and "tribes," or making the Nora terrified of and disgusted by technology. You could have accomplished the latter without the former, easily. The Nora even seem more primitive in comparison to the other regions in the game, in part because they refuse to embrace these foreign technologies and practices. Sound familiar? There's no way you guys didn't notice the parallels. Game developers can't forget the impact that every little bit of their product has on their audiences, and how crucial it is to do appropriate and thorough research.

I'll stick by my guns on this one; Horizon Zero Dawn, like a number of acclaimed video games, is an interactive work of art. But as art, it's subject to the same critique and criticism as art hanging in a gallery, and it's up to the creators to respond appropriately—and preferably before the game releases. More research could have subverted this issue entirely, making the game almost perfect.

Dave Gamble
One of the things I like the most about my semi-retirement job is that I am as far from having to make any kind of meaningful decisions as I am from having any responsibility for results (or lack thereof), something that I haven't been able to say for nigh on two decades now. I welcome being told what to do, how to do it, when to do it, and when not to do it. As an aside, there's your secret to making it to your silver anniversary. I like that almost as much as having work that is done when it's done, and knowing precisely what needs to be done before the job is done. Which is a long way of saying that I have made amends with Far Cry 5. The reason for this rapprochement is simple: I started playing Arcade mode instead. No more tromping around a massive world looking for trouble of the sort I can handle and, more often that not, finding trouble that I can't. It's all right there: kill six guards. When that's done, you're done. Quick and easy. Well... not too easy.

When I'm not slinking through the deep weeds of the south with a recurve bow and the morose-yet-hostile attitude of a three-legged dog with a persistent lisp, I can be found flying the unfriendly skies of the Caucasus, primarily around Sochi, in my well-equipped and dangerous to the core DCS AV-8B Harrier. Dangerous to whom, you ask? Well, a couple of weeks of practice in the jet has made me far better at blowing stuff up with various and sundry explosive devices, but it has hardly made a dent in my lamentable inability to land the thing, so I would say it's dangerous to all involved. It sure is fun, though!

Eric Hauter
With summertime in full swing, and the kids wanting to go to the pool every day, I have been focusing on playing Switch games more than ever.

While I won't bore everyone with an update about my Fallout Shelter—super rich, ultra-powerful—I have to admit that I am still logging into the game several times a day. I have also been spending some time getting my bearings in VSR: Void Space Racing. VSR is a racer that takes place in a zero gravity environment. And unlike "gamey"-style space racers, things like momentum and inertia matter deeply in VSR. I pretty much spend all of my time flying off the course, bumping into things and flying in the wrong direction. It's a sad state of affairs.

I have also been taking a look at Salary Man VR, a VR block-based puzzle game. While I am not yet sold on the puzzle design, I am enjoying the weird 60's vibe and Japanese pop soundtrack. Even if I end up not enjoying the game in its entirety, I am really digging its aesthetic.

Randy Kalista
Stated simply, I don't require authenticity in either my fast food or my video games. Except when it comes to tacos and naval combat. Long story short, both of those requirements came about during my time ported in Naval Base San Diego. Suffice it to say, I really need a slow-boat ship-to-ship combat sim right now. But $40 to get into Naval Action's Early Access is a tad steep for its mixed reviews. Instead, World of Warships and its free-to-play on boarding sounds just about right. I'd given it a shot a few years ago. It didn't stick at the time because its ships still moved too fast to fulfill my legitimacy prerequisites for naval combat simulations. But I'm over that, for the moment.

The Banner Saga 3 launches next week. My review will simul-launch with it. Once I wrap that, there's a new bailiff in town as I direct a ruined town to rise From the Ashes in Kingdom Come: Deliverance's DLC. Oh yeah, and I've got some opinions about the VRidge by RiftCat, an app that turns my smartphone and Google Cardboard into a magical device that makes Steam think I've got something closer to an HTC Vive. Never mind; with all my overdue assignments there's no time for slow-as-molasses naval combat. Maybe next week.

Nicholas Leon
I just realized that I've spent nearly two weeks away from my PS4. Most of my game time has been occupied by either playing Fallout Shelter or Far Cry 2, and the rest of my time has been spent interviewing and applying for jobs, watching movies, reading books, and, most recently, practicing for the GRE.

Well, I'd really like to get back on the longform single-player video game train that does more than offer up the same stuff over and over again. Here, I announce my intentions to make my best effort to return to either Persona 5, or Nier: Automata.

That's really it, I can't remember where exactly I am in either game, but I miss them. I miss them so very, very much.

Kevin O’Connell
This has been a very busy two weeks—car purchase, trip to Amish country, and Foo Fighters—but I am still managing to stomp through Earthfall. Not quite a Fortnite or Overwatch copy and different enough from PlayerUnknown's Battlegrounds, the game is set as a 1-4 vs. aliens in a campaign setup. It isn't the standard run-an-fetch-it though. Running at some times, retreating at others, the game requires you to scrap your way through some differing baddies to get to the end of each area. No checkpoints. No pausing. Just a rush to get where you need to without being ground into dust. So far, so good, but the verdict is still out. Should have the review early next week.

I have also run into a server issue with Titan Quest that has made continuing the game impossible. There have been glitches and boots here and there, but the game has gotten to the point of kicking every 5-15 minutes and we cannot beat the end the second way through because of it. Between the porting to XBox and the recent update to make it prettier, THQ has made the game unplayable. It is happening more even with the single-player campaign. They need to fix it soon before their fan base goes the way of the Gorgons.