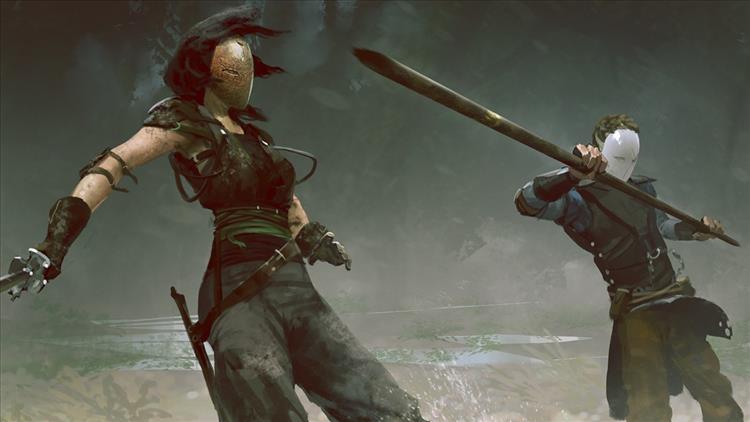 While Valve isn't sharing hard numbers, it's put out a shuffling list of Steam's top sellers of 2018 so far. GameStop could be the next hot stock if it ditches games and focuses on consoles and the gaming community. And these Fallout 76 future fans met up in a West Virginia park, decked out in post-apocalyptic gear.

Zachary Atwood
While I'm still chunking away at The Witcher 3, I've turned my co-op attentions to the newly released Warhammer: Vermintide 2 (on Xbox One). I'm really enjoying it so far, and it feels like a nice self-contained game that I'll be able to pick up for a little bit and put back down once I've had enough. Other than that, I've been filling any cravings for multiplayer with helpings of Realm Royale and Fortnite.

Sean Colleli
I'm getting closer to catching the Riddler in Batman Arkham Origins, and it's funny to see his early days as this crusading hacktivist bent on blackmailing everyone in Gotham that has pissed him off. I'm also enjoying watching my fiancee puzzle her way through Limbo. She already has a fondness for 2D platformers and bleak, minimalist artwork, and it's always fun to see someone discover a well-known corner of gaming that happened to pass them by. Speaking of which, Limbo is eight years old this year! I hope that makes you just as uncomfortably reflective and introspective as it made me.

Kinsey Danzis
I, um...well. Kinda ordered a gold PS4 from eBay. I managed to persuade myself that it was for one of my other jobs. I'm going to be working with one of my old professors to make a first-year course about how history and video games as a medium interact—her idea, surprisingly—and the only console she's vaguely familiar with is PS4. I've been wanting one for ages nonetheless, mainly to play Horizon Zero Dawn and Uncharted 4, but still. Finances. I did get to use that sweet 10% tech coupon though, so I got to buy the console and Horizon Zero Dawn Complete Edition (and a couple of old Pokemon cards) for the original price of the console. I'll take it.

Having partially mastered the landing of the DCS Harrier (and by "partially" I mean surviving two out of three attempts, on average), I moved on to the delivery of weapons. That is, of course, the raison d'être for that piece of equipment, so learning what the plethora of different bomb types do, along with the disparate means of aiming them, was a logical next step. I created a mission that has my jump-jet carrier within easy flying distance of a coastline where I dropped in a large collection of fuel trucks waiting on the road to be loaded onto a cargo ship. That stretch of land also attracts a lot of trains, too, so it is truly a target-rich environment. Due to last week's death fatigue, I added no ground- or air-based enemy defenses. Their only hope of survival comes down to how many round trips I can make back to the carrier without crashing the jet. I can carry enough cluster bombs and gun ammo to get somewhere between 8-12 trucks burning, and the gun does an incredible job of perforating locomotives. If I want to sink the carrier, I just load up a couple of 1,000 lb. "dumb" bombs. The problem is, at some point it lost much of its challenge. I might as well been driving for Uber. Pick up bombs, deliver bombs. Repeat. The almost casual nature of it belied the pain, destruction, and many, many deaths that I was delivering at the behest of my government. The wholesale killing of others who simply live with a different government took a toll on my soul, no matter how much I told myself that I was just "doing my duty."

Meanwhile, back in the dystopian survival game P.A.M.E.L.A. (look for a review soon!), I found a solution to my early pattern of dying quickly—it was right there in the settings. I just slid all of the sliders down to Easy and went on from there. Again, that took away the frustration but replaced it with boredom. Sure, I now have plenty to eat and I can generally whup up on the mutated zombie-like walkers that used to tear through my feeble defenses like a chainsaw through warm butter, but as it turns out that leaves me feeling like one of the nonagenarians you see walking the empty aisles of your local shopping mall on Sunday mornings. Well, with one exception: they probably aren't quite tired of living just yet.

Personally, at least with regards to inhabiting whatever planet I'm on in that game, I'm pretty tired of living.

Eric Hauter
I've been spending a great deal of time playing around with Wolfenstein II: The New Colossus on the Nintendo Switch. I never played the original release on other consoles, but I can report that this portable port (see what I did there?) runs silky smooth in handheld mode. I can't believe how good this game looks on a handheld system. I have yet to try Wolfenstein docked, so we'll see if the framerate takes a hit.

I have also been continuing to micromanage my Fallout Shelter on Switch. I have yet to allow my Vault to swell past 60 dwellers, instead concentrating on making my Vault powerful and impenetrable. I fended off a radroach invasion last night with just one guy wielding a laser rifle, and he managed to take the intruder out in about 10 seconds flat. I guess that's what happens when you maximize stats for every dweller in the vault. I'm going to have to give in here eventually in order to have enough dwellers to get the final upgrades on my weapon and outfit building facilities, but for now, I'm happy just maximizing what I have.

Randy Kalista
I took kung fu as a kid. I had good form but I was a big baby in the ring. Couldn't fight to save my life. I cried and bowed out after taking one punch to the nose in my first full-contact match during a big tournament. So, now as an adult—still with very little fighting spirit, however—I quickly downloaded one of this month's PS Plus freebies: Absolver. With a name like Absolver, maybe a little anonymous online brawling will wash away my lingering disappointment with 10-year-old me and the sometimes weak-willed grown-up he eventually grew up to be.

Now, if I had my druthers, I druther be Fireflying my merc outfit through the mech-infested BattleTech universe. But that game has other plans for me. I don't know if it was two or maybe three patches ago, but I can't get through more than one-and-a-half battles without a swift, unceremonious crash to desktop. One of my favorite games of 2018 so far is just not that into me. Uninstalling and reinstalling now.

He died once before, but I was kind of ticked off at the way the game relentlessly throws enemies at you, so I reloaded.

The second time, however, I decided it was time to let him go. It was in the far northwestern point of the map, and we had just landed the jackpot: literal gold. But then high-level mercenaries showed up, and riddled us with bullets. Josip went down, and required three morphine shots to die.

But also great. This game, with its almost nonexistent story and its paper-thin characters, not to mention repetitive (but still mostly fun) gameplay, packs surprises. I decided against reloading to save Josip the second time, because I knew that all of these ridiculously relentless mercenaries would not stop until one or both of  us were dead. And in a way, I think Josip earned his death.

So when I continued the game this week, I was glad to see that Marty Alencar, my usual rescue buddy, was now my best buddy. But then on our first mission, his was immediately shot down—in a scripted sequence, of course—and I had to go save him. This happens with essentially every "buddy alternative option" in the game, and although I understand that the devs were really going at it with establishment of a consistently near-death tone and experience, it gets old after a while. I'm a third of the way through the game, but I'm getting tired of doing the same type of destructive sabotage mission for each faction. We'll see how long I last.

Kevin O’Connell
I have kinda had it with The Crew 2 as the races are just mind-numbingly boring and simple. I cannot think as to why they made this game so noncompetitive and more of a full-on arcade game vs. an actual racer. Read the upcoming review and you'll get the idea. It was just disappointing.

I have almost completed the second time through with Titan Quest and have come to realize that as good as the game is and how decent the latest update is, that the server problems have gotten steadily worse. I was kicked out five times last night—once in the middle of fighting Hades. I have no idea what the cause is, but the restarts are getting bothersome. The inability to purchase and try weapons to see if there is a benefit is also getting worse and worse with going up levels. The last weapon I bought was 5.6 mil and it was worse than what I had. When I sold it back, it was worth 200k. A 5 mil loss is not helpful and should be fixed.

From here I am still recouping from my long trip and am waiting for a few games to be released.

John Yan
I'm kind of sad that the new Elite Dangerous update hasn't pulled me in to play because of all the things Frontier Development keeps doing to nerf fun. So, I'll be heading into The Forest to hunt for a map and compass and maybe start on the quest to rescue Timmy. I'll probably also pop in for some quick sessions of Project CARS 2 now that I have my gaming chair all setup with my racing wheel and pedals. Playing that in VR is pretty cool.