This week marks the release of the latest game in the Mario Tennis series with Mario Tennis Aces on the Nintendo Switch. Aside from the usual Mario Tennis fun, a few new mechanics are included as well as an Adventure Mode where you take on a variety of missions and even boss battles. However, while online play is enabled, for some reason you can't play online with friends as of the time of this post, or at least it's not working on my end and I've seen online where others are having the same issues. That being said though I have checked out Adventure Mode and I'm really enjoying it so far.

A new version of Minecraft is available for the Switch and will let players discover a ton of new community creations in the Minecraft Store and let you share the fun with friends on the phone, Windows 10, or other consoles. If you currently own Minecraft: Nintendo Switch Edition, you'll be upgraded to the new version for free by downloading it on the eShop.

Next week will see the release of a couple of big games. First up is Lumines Remastered on the Nintendo Switch. This is an HD remaster of the original Lumines game and features easy-to-play gameplay along with some house, trance, and techno music. Lumines Remastered will be released on June 26th along with Ys VIII: Lacrimosa of DANA. In the latest game in the Ys series, Adol is shipwrecked on a cursed island and must form a village with the other shipwrecked passengers and explore some mysterious ruins. I've recently gotten into the Ys series so if the current Steam sale doesn't drain my wallet, this month of Switch release might. 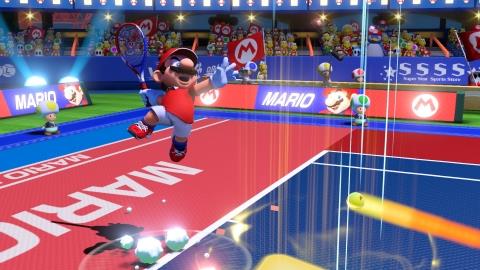 The Mario Tennis Aces game will be available on June 22. (Photo: Business Wire)

*Additional accessories may be required for multiplayer mode; sold separately.