The Exorcist: Legion VR slinks onto the PlayStation Store

The Exorcist franchise has one of the more fascinating Hollywood stories. Each film in the series has been interesting in its own way. After the smash success of the terrifying first film in 1973 (resulting in emotional scars for an entire generation), a sequel was cobbled together in 1977 that was so bad that it almost killed the franchise. In 1990, a third film, based on original author William Peter Blatty’s novel Heretic, arrived in theaters and recovered the series’ reputation. While only a moderate hit, the third film is pretty great, matching the mood and tone of the original film and featuring an amazing star turn by George C. Scott.

Then in 2004 and 2005, mirror image films Exorcist: The Beginning and Dominion: Prequel to the Exorcist were released. Unsatisfied with legendary director Paul Schrader’s film Dominion, Warner Brothers tossed the keys to less-legendary director Renny Harlin, and had him remake the film in its entirety, with the same actors and the same script. When Exorcist: The Beginning crashed and burned at the box office, Warner went ahead and released the superior Dominion on home video. The world kind of mumbled “What the hell was that all about?” and went about its business.

After the prequel debacle, the franchise went quiet again until a television series appeared on Fox in 2016. While the series was unable to maintain the tone, the pilot is one of the best hours of television I have ever seen. The rest of the series isn’t awful, but that pilot is excellent. The series lasted two seasons before getting cancelled in 2017.

All of that is my way of saying that I am really into the Exorcist franchise, so I was shocked when I saw that an episodic VR game based on the series plopped on to PS VR on June 19th. I had no idea that the game was coming, or I would have trumpeted it from the rafters. After my initial delight, I immediately became creeped out at the idea of actually playing the game. As a child of the 70’s (and having lived through the “Satan is everywhere” scare of the mid-80s), The Exorcist holds a special place in my heart as one of the few things in life that scares the crap out of me. Though, from what I can tell (and I have not confirmed this), the game series seems to be based on the license for the third film specifically, which (if I am correct) is a clever way to work your way into the Exorcist universe without licensing the whole enchilada.

The game has been developed by a team of sadists at British dev company Wolf & Wood, and published by a company with the innocuous name “Fun Train”. With a team that seems to consist of a solid mix of game designers and Hollywood horror veterans, I am deeply curious to see what this team has created. Just watching the trailers for each episode, it is clear that they dove into the franchise full force. I frankly don’t know if I can emotionally handle someone whispering “Why does your God swim in such filth?” to me while I am trapped in VR.

It should be noted that the series has been on Steam for a while now, and has a 9/10 rating from users. Three episodes are available immediately for PS VR on the PlayStation Store for $6.99 each, with two more episodes scheduled to be released. You can also purchase the entire series for $29.99, snagging the fourth and fifth episodes as they are released. Good luck with your soul! 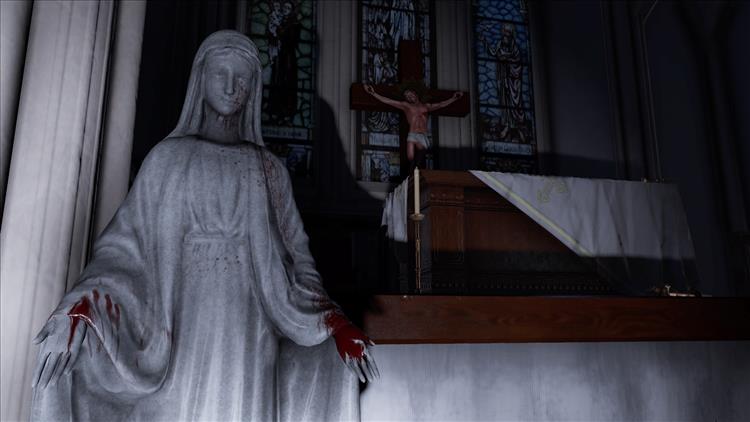