I bought Star Wars Battlefront II, and I shamelessly love it

I have long had a policy that games that I only buy games that I’m not fully invested in when the price has dropped under the $20 pricepoint. I have a large family, and unless I absolutely know that I’m going to be all in on a game, $60 is too great of an investment to justify. This week I noticed that Star Wars Battlefront II - the most questionable game of the last year (decade?) - was unexpectedly on sale for $17.99, so I figured what the heck. I’m between review games at the moment, and I love Star Wars. I’ve been interested in checking out the single player campaign, in spite of the scorn that it almost universally received upon release. So I clicked the button and bought Star Wars Battlefront II.

After downloading the nearly 100 GB file, my family settled down Saturday morning to check it out. Sunday night, we reluctantly pulled ourselves away from Battlefront II to go to bed. I’m not saying that we played Battlefront II all weekend without breaks, but we definitely played it a lot more than I expected.

With over 6 months worth of new content added by EA, Battlefront II is a giant, complicated game. There are more modes than you can shake a stick at. My current favorite is the Heroes vs. Villains mode, which allows 4v4 battles, with one side picking good guys and going to battle against a team of bad guys. There is something so amazingly satisfying about stalking through a map as Darth Vader, levitating Luke Skywalker off the ground with a force-choke, and obliterating him with a flurry of lightsaber strikes. Eat it, Luke, you big whiner!

I also enjoy the Overwatch-like Strike battles (new with the Solo-inspired season), which task teams of 8 players with escorting a payload (or stopping it) through a gauntlet, fighting for every inch of ground. My 15-year-old is a big fan of the Starfighter battles, and my 17-year-old likes the close-quarters Blast battles. And both of the littler kids are entertained by watching us play, with nothing terribly inappropriate on the screen. Everyone in the family is hip to Star Wars, so the kids are accustomed to caped bad guys and blaster battles.

There are so many modes that I feel like after playing for one weekend, we have barely scratched the surface of this game. And more modes and maps are coming soon with the announcement of Clone Wars content being released in the next couple of months. My family got so wrapped up in the multiplayer modes that we have hardly touched the single-player campaign, so that is still there waiting for me when I am ready to tackle it.

With no paid DLC, and EA being totally shamed into unlocking all of their planned paid content for free, Battlefront II is now one of the best deals in gaming. There is no sign of any of the “pay-to-win” loot crate nonsense that got EA in such hot water last November. All of the heroes and villains are unlocked from the outset, and playing normally through the weekend earned us enough credits to unlock a few fun skins. It took me a while to figure out how to spend extra money on the game if we wanted to (we don’t), so its not like EA is shoving paid content down anyone’s throat at this point.

If you had considered picking up Battlefront II during its release window, but were scared off by all of the negative hype, now is a great time to jump in. There is a wealth of Star Wars goodness to be had, and lets be real, with EA’s predatory money-gouging stripped out, Battlefront II is gorgeous, fun, and well worth the reduced price.

Star Wars Battlefront II is on sale this week on the PlayStation Store for $17.99. If you are interested, you might want to hurry; the sale ends at 8 PM Monday night. 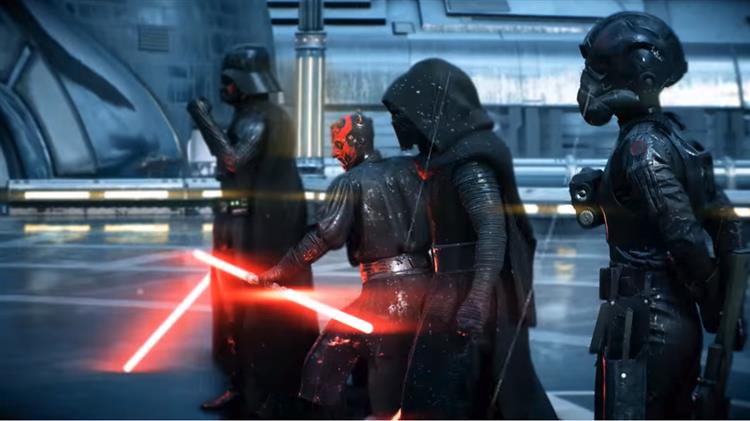