As revealed on the Bungie Twitch stream this week, Destiny 2 Year 2 kicks off with the Forsaken expansion September 4th. While much of the loyal Destiny fanbase probably feel like the Forsaken given the long uphill climb that has been the sequel's trajectory, the news that accompanied the announcement seems to suggest the player base's refrain that "maybe this will be a good game again in the fall" continues to be on track.

Forsaken will introduce two new destinations, the usual smorgasbord of new weapons and armor, a new raid, but also bring in new Supers and endgame activities as well. It more or less follows the major expansion blueprint from the original game that was The Taken King expansion. Forsaken will take Guardians past the Reef out to the edges of the frontier and introduce Gambit, a PvP/PvE hybrid that will put two 4 player teams against each other in a horde mode to score as many points taking down AI enemies as possible. This new mode will be first playable at this year's E3, June 12-14.

The biggest takeaway from all of this news really is the roadmap adjustments, that really do look to finally, a year later, put Destiny 2 in a place it should have been from launch. Bungie made so many poor choice in changing Destiny 2 up from the original and within weeks of launch it became apparent just how much poorer of an experience the sequel delivered from its predecessor. However with the new incoming features like the new weapon slot system, random rolls returning, modes being reworked, and all of the other changes already in the game such as the adjustments to exotic weapons to actually make them powerful again and 6v6 PvP that occasionally shows its face, Destiny 2 might finally become the game it always should have been.

Destiny 2: Forsaken is going to be $39.99. There is a Forsaken + Annual Pass bundle for $69.99, and the Forsaken - Digital Deluxe Edition featuring premium digital content for $79.99. The expansion releases September 4th on PS4, Xbox One, and PC via Battle.net. PS4 gamers will get timed exclusive access to a new strike, one gear set per class, a new ship, and an exotic weapon. However, for the rest of the platforms, Forsaken’s release will unlock all of the previous PS4 timed exclusives to those players. 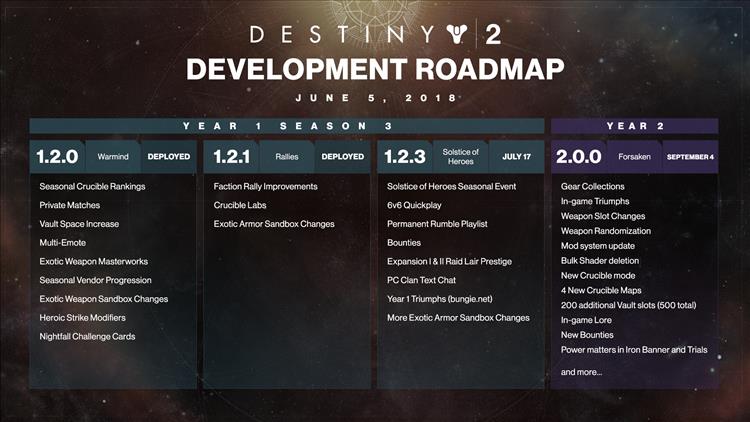