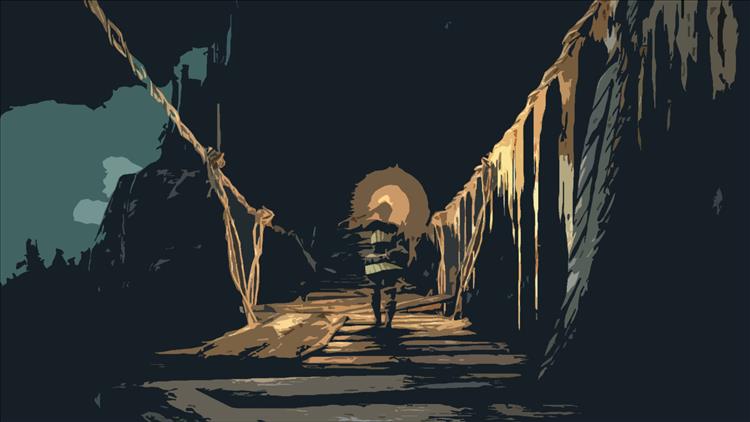 Yes, you can now buy a $27,000 version of "alleged" video game Star Citizen. Active Shooter puts you in the shoes of a gunman in a school building—and was quickly banned by Valve, though they didn't cite the reasons you'd think. And in a move taken straight from The Last Starfighter, the US Air Force is developing a game that will track and rank potential recruits.

Dave Gamble
Back from playing money games in Vegas (took $10 for gambling out there, brought $14 back!), I find myself with a fairly lengthy list of games to play for review. They are all in various stages of completion, ranging from half-written to just now starting on the game, and I'm having a hard time deciding what to concentrate on. There's nothing like an expiring embargo to focus the senses, so today I'm finishing up the second phase of Downward Spiral: Horus Station, which can be played flat or in VR, as if that is a real choice; a weightless, space station environment can only really be appreciated in VR. It also offers solo versus co-op, and Engage (things shoot at you) and Explore where you're a lone repairman floating around trying to get a station you have never seen before back to operating condition. These are also choices that really aren't in that Explore is easy to do solo, and it is probably preferable to do so. Engage, on the other hand, is a bit much for the solitary repairman to handle alone, especially at first when the only weapon to hand is a staple gun with poor aiming sights. I will prevail, simply because that is what space station repairmen do.

I also have a couple of programming puzzle games going. There is some risk there, too, but it's in the real world, where a game reviewer could conceivably send a couple of highly detailed emails asking questions about the game to the wrong developer. Fortunately, said developer has a far better sense of humor than the automated sentries on Horus Station.

For a breath of fresh air, so to speak, I'm just about through a relatively short puzzler called 39 Days to Mars. This is one of those puzzles that starts the player out with as little information as possible which, in this case, could correctly be described as "none," resulting in a two-part puzzle with the first part being to figure out how to play the game. It's two, two, two puzzles in one! The steampunk motif is always popular with me, and the puzzles are fair and more or less easily solvable with enough experimentation, so I'm not complaining.

I am enjoying all four of them in different ways, but honesty compels me to share that I will be universally happy to have them off of my platter. It's not like you come back from Vegas well rested, after all.

Eric Hauter
Oh boy. After taking a bit of a break last week after tying up a number of reviews, I plunged back into deep waters this week.

Currently, I am finishing up Dark Souls Remastered for review. Or should I say that I am attempting to finish Dark Souls: Remastered for review. It's cool, I already played the original Dark Souls (and Demon's Souls) a few years back on PS3. I am happy to report that I still completely hate the game, and hate myself for trying to play it again. So, that ought to be an interesting review. I am also picking away at Rick & Morty: Virtual Rickality for review. That one ought to be wrapped up after another session. Its a fun little sandbox, but I'm running into a lot of the same optimization problems that I usually see when VR titles developed for PC are ported to PS VR.

In my free time I am also playing Defender's Quest: Valley of the Forgotten (DX edition), an indie tower defense/RPG title that saw some success on Steam a few years back and is now on PS4, and is set to release on Vita very soon. The game has a great set of hooks, as your towers are actually RPG characters that each level up individually and gain their own skill set. Very cool.

Randy Kalista
Endless Legend sold me on Endless Space 2. This science-fantasy universe they're building in the Endless family of games has got me reading up on bizarre in-game lore that spans every fantasy/sci-fi genre I've ever been exposed to, and I love that it all exists within random galaxies that aren't big enough to hold all of them. The gameplay mechanics go nuts between the space-treant Unfallen, the billionaire-cloned Horatio, the out-of-time-and-space Riftborn, or the eat-everyone Cravers.

I'm also inching my way towards success with the Riftcat/VRidge, an app that streams VR games from my PC to my phone. The VR aspect is what pushes Riftcat than Steam Link's new ability to stream games from Steam to Android. Elite Dangerous is my foot in the door. This'll be great if I can get the resolution clear enough to read the game's one million menus.

Nicholas Leon
I've started up a New Game+ of Horizon Zero Dawn, and it is as exhilarating as I remember. There are some games that are open world for the sake of being open world, full of nothing. But not so this game. There is a purpose in each placement, whether it is machine, resource, collectible, or fire. This time, I've decided to forego the main quest for as long as I can, in favor of side quests and collectibles. I do this not because I'm not interested in the story (as the story truly is the backbone that the world rests upon) but because the first time around I only played the story, mostly because I was on a time crunch (being in school will do that to you). So, here's to hoping that this time, I'll actually get that Hybridweave armor sitting in the beginning area of the game.

Kevin O’Connell
I had a busy end of week into a busier holiday weekend, so I did not have tons of time to game. Most of my time was dedicated to Titan Quest's online co-op and, besides a very few glitches, had a good time with it. I can say that some of the bosses have been wimped down a tad from the original PC game, but it hasn't ruined the game by any means. There are a few too many texture hiccups from area to area as well, but I suppose THQ did their best to remedy as much as possible before porting. Nitpickers would have a field-day though.

I watched a couple of games and some rather funny clips of my son Aaron's Fortnite escapades and have to say that I get the likability of the genre. There is no need for story. No need for developed characters. Not a huge need for outfits or customization. All you do is drop in and try to one-up the next player who comes into view. I've seen everything from being shot by a bush, to being rocketed from a cliff above, to being sniped a full screen away. There are more cheap ways to get sent back to the load screen than any other game I've seen. Just...awful.

Besides cleaning off a bunch of junk on my Xbox hard drives and doing some game shopping, I have very little else to report on.