The Nintendo Switch will also see Bloodstained: Curse of the Moon, where you play as a demon slayer named Zangetsu who must defeat a powerful demon lurking in a dark castle.  Bloodstained had a pretty successful Kickstarter a while back so I'm curious how the game itself does (I didn't back the game personally). May 29th will also see the release of Ikaruga on the Nintendo Switch. Ikaruga is an interesting shoot-em-up where you can alternate between two energy polarities (black and white) and you can absorb bullets of the same color while bullets of the opposite color will do damage.

The big release for the 3DS is Dillon's Dead-Heat Breakers. The latest game in the Dillon series has Dillon the armadillo, his squirrel engineer Russ, and your Mii character defending a post-apocalyptic Wild West from an invasion of rock monsters.  You can download a free demo of the game from the Nintendo eShop if you want to give it a go before deciding if you want to pick it up. 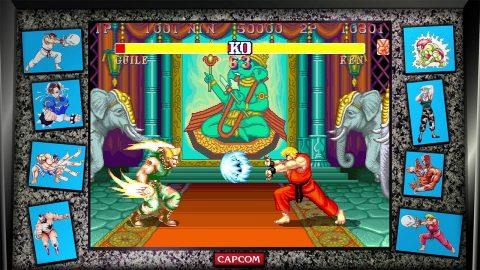 Nintendo Download: Dillon Rocks, and Rolls, in His Return

The Street Fighter 30th Anniversary Collection will be available May 29. (Graphic: Business Wire)