Resistance is Futile! Next Generation DLC coming to Star Trek Bridge Crew on May 22!

I know that every other headline will say that, but I could not resist. Resistance was futile.

Red Storm Entertainment dropped bombs all over my peaceful Wednesday afternoon today when they announced that they would be fulfilling my dearest wish and will be releasing a Next Generation DLC for Star Trek Bridge Crew. In 13 days. 13 days!  It’s done! They pulled a “Fallout 4” on me!

I’m clearly excited. As a lifelong Trek fan, the initial Star Trek Bridge Crew was dream come true. I was delighted to find a ready-made community already in place on release day, with a bunch of like-minded folks all excitedly engaging in the best role-playing-fantasy-fulfillment geek out I have ever experienced. All through those early days in STBC (and ever since) there has been a steady drumbeat in the background, a subliminal murmer that would occasionally surface when someone would dare to say out loud, “What if they added Next Gen?” Silence would fall, and then everyone would go “Ooooooh…”. Everyone wanted it, but no one would dare suggest that such a grand idea could ever become reality.

I see a lot of videogame news, and it is rare that I get this revved up. I literally dropped everything to post this news. There are tons of details in a lengthy post by Red Storm Designer Hunter Janes over on the PlayStation Blog, so I’m not going to rehash them all here. I will, however, point out that Janes confirms that there will be Romulans. Then he confirms that there will be Borg. Then he spends the rest of the post detailing how awesome the Borg are. I assume that the Romulans are interesting too.

Janes also notes that there will be two new Ongoing Voyages (the random mission generator), TNG-era uniforms, and the ability to play as Soong-type androids (which EVERYONE will be doing).

No price information has been made available yet, but frankly (like the initial release) it just doesn’t matter. I will buy this. I will buy this and I will love it. I will go without food if necessary.

Miracles happen. Santa Claus is real. Star Trek The Next Generation is coming to Bridge Crew. The world is a wondrous place. 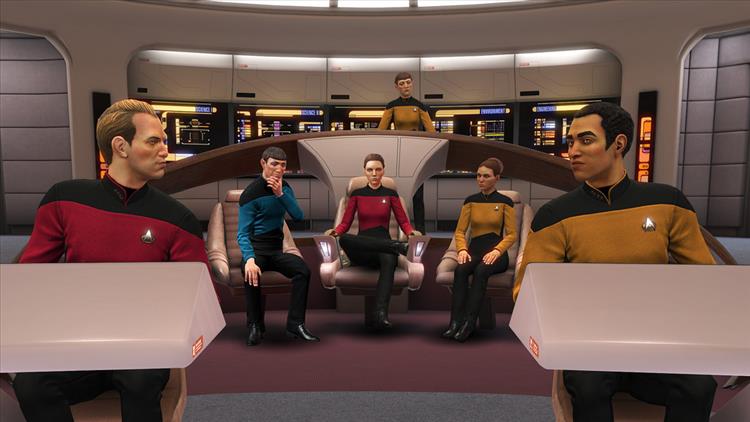