It seems as though Jurassic World Evolution is getting more of a story than I thought. While we previously reported that Jeff Goldblum was on board to offer guidance/dire warnings to players as they attempted to construct their own parks, it has now been revealed that Bryce Dallas Howard (the blind woman from The Village) and BD Wong (spent years on Law & Order: SVU) will be joining the cast. This implies that there will be more to the story than just “building a park with Jeff Goldblum sniping at your choices”.

Jurassic World Evolution is a park builder, though one that takes place in one of the most desirable park-building universes possible. According to the press release: “Jurassic World Evolution places players in control of operations on the legendary island of Isla Nublar and the surrounding islands of the Muertes Archipelago. Players will build their own Jurassic World as they bioengineer new dinosaur breeds and construct attractions, containment and research facilities. Every choice leads to a different path and spectacular challenges arise when ‘life finds a way.’” Containment facilities? Ha! I scoff at your containment facilities.

I am really looking forward to Jurassic World Evolution. The real challenge for me is going to be actually attempting to make a viable park, instead of just repeatedly setting things up for failure. I am excited to see how the various dinosaurs interact with each other. If I want to make an evil Jurassic Park, will the game stop me? Can I put Velociraptors in the aviary dome with the Pteranodons, and then run tour guests through it in convertible jeeps? And if not, WHY NOT?  It’s my park, and I’ll feed the Pteranodons any way I wish, thank you very much.

Do you think that the game will let us feed Bryce Dallas Howard and BD Wong to a T-Rex? Just asking.

Jurassic World Evolution will launch digital-first June 12, 2018 for PC, PlayStation 4 and Xbox One, just in time to catch a ride on the hype train that is sure to accompany the release of Jurassic World: Fallen Kingdom on June 22. A physical release will be available in stores July 3, 2018. 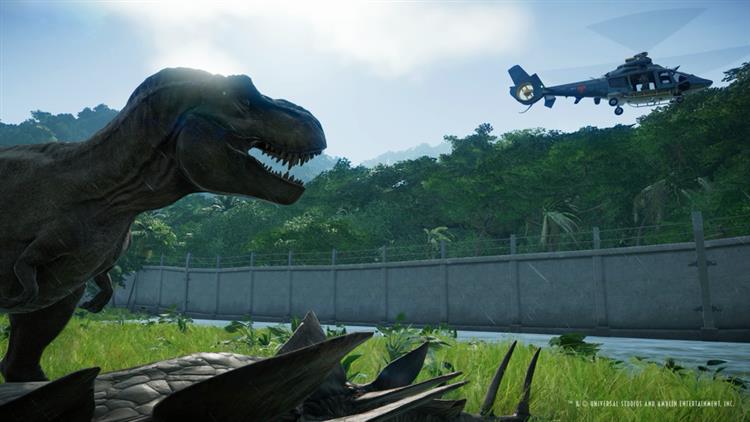