Warmind, the second expansion for Destiny 2 is official. Releasing May 8th, expect a steady trickle of screens and hype but very little in the way of actual content details until the Bungie Twitch livestream on April 24th. You'll get some #influencers using the #Destiny2Partner tag and maybe even a screenshot or two, but I expect things to be kept pretty well under wraps until that livestream.

With the expansion, Bungie is kicking off "Season Three" of Destiny 2.  While expansions are paid DLC, Seasons are new content available to all players. Season Three is concentrating on the Crucible, the PvP segment of Destiny. The first bit of news is that all of the new Warmind maps, as well as those from the first expansion, Curse of Osiris, will be open to all players. This is a nice olive branch but ultimately necessary. At the moment, there just isn't the playerbase to divide the population into 3 potential segments for matchmaking. Private matches, yet another Destiny 1 feature that never made it into Destiny 2, will finally make its debut.

And while all of this news and content is nice, it really isn't going to dig Destiny out of the hole the developers have put it in. The Go Fast Update which was just the regular monthly update probably will do more to fix the state of the game than anything in Season 3 or the expansion. I actually have pretty low expectations for the expansion in general seeing as I'm not seeing how it's going to move the needle on the game's state, instead just doing what the first expansion did in adding shallow new content that once it is breezed through gives no reason to replay or stick around.

No, the real news in the Development Update is Season Four: Weapon Slot Changes and Weapon Randomization. Destiny's core gameplay loop is a looter shooter. Shoot stuff, get loot, shoot more stuff with the new loot, repeat for even better loot. Destiny 2 fundamentally broke the loop by locking the most interesting loot onto a single weapon slot and then making none of the loot drops matter save the first by removing all randomization. These two features directly address these exact concerns. Season Three is going to come and go and those with season passes are going to drop in for a few minutes and get back to what they're doing. If Destiny has any chance of surviving, it all rests on the shoulders of Season Four delivering. 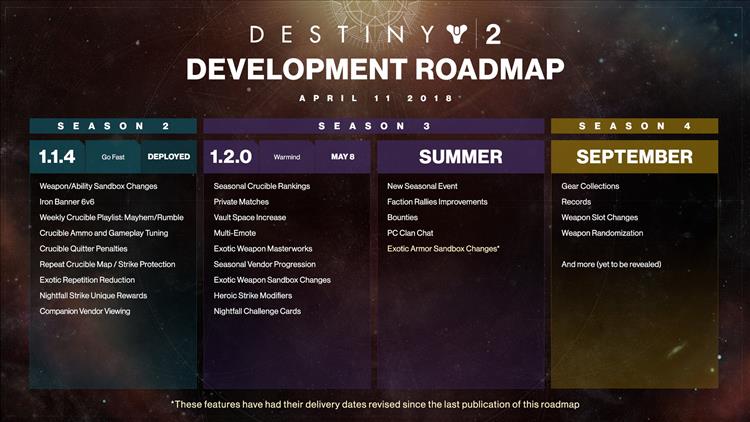