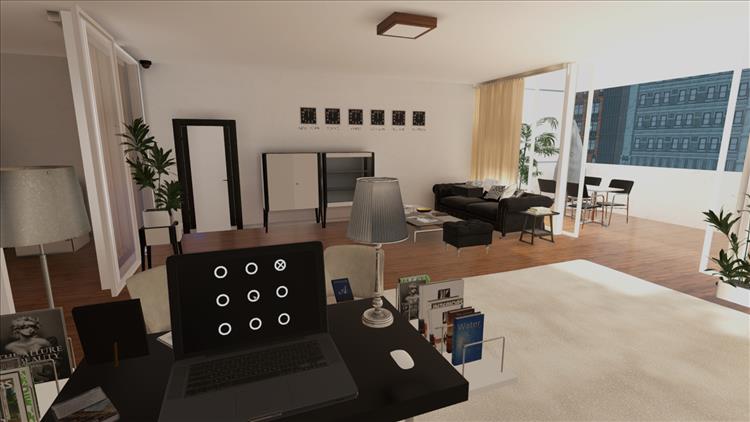 Here's the 90-second sizzle reel of violence in video games that President Trump says plays a role in mass shootings. This psychologist's research shows that 80 percent of mass shooters showed no interest in violent video games. While this opinion asks: If movies, music, and books can affect us, why do we pretend that video games can't?

Sean Colleli
I might actually wrap up The Legend of Zelda: Breath of the Wild this weekend. I finally made it through all the DLC trials and unlocked the ancient motocross bike. So now I'm just not sure if I should spend the time farming monster parts to upgrade the rest of my gear, or just head to Hyrule castle and put Ganon down for good.

Dave Gamble
I'm splitting my time between a couple of games in for review. First is Escape Room VR: Stories, which is surprisingly (well, not) a VR-based room escape game. It's actually a quite enjoyable room escape game except for one irritation, and that would be the "stories" part. The three rooms are very distinct from each other, so the designer thought there must be a need for some kind of story to tie them together into an unnecessarily cohesive bundle. It's almost as if these guys all bought the same Udemy game design class and it insists, insists that there absolutely must be a storyline for every game. It wouldn't have been nearly as irksome if they had refrained from breaking the VR fourth wall with stark, immersion-ruining interruptions.

When I'm not deep in VR struggling to figure out what purpose there is for a pink car to be up on a service lift, I'm in VR trying to get a handle on Apex Construct VR. It's early days with that one; I made it through a simple tutorial, the only thing about which I remember is that it involved a bow and some arrows. That's all I really know at this point, but...bow and arrows in VR. Really, what more do I need to know? I'm in!

It can't be, and should not be, all work no play, so as long as I have my room configured for half-room scale (the best I can do) I take a break now and then to do some sailing in VR Regatta – The Sailing Game. Other than having to sit on the floor and getting hopelessly tangled up in the Rift umbilical cord every time I have to go over to the other side of the boat, it's a very relaxing experience: there are no interruptions.

Eric Hauter
I have been spending quite a lot of time as Kazuma Kiryu, wandering around Yakuza 6 and goofing off. The other night, I found myself sitting alone in a private karaoke room, yowling along to a very sappy love song and slapping my leg in a vaguely rhythmic manner. I did this for about 15 minutes before getting bored and wandering back out to the streets in search of some punks to pummel with bicycles and traffic cones. My current favorite move in battle is to pick a punk up over my head and then slam them crotch-first into a lamppost. The other day I was fighting four punks, and I grabbed them one at a time and dragged them over to a nearby truck, slamming their heads one by one into the side of the vehicle with a splat. Very satisfying.

On the handheld side, I have been fiddling around with The Alliance Alive on 3DS for an hour or so before bed every night. You can't slam dudes into the sides of buildings, but you can engage in some classic JRPG goodness, which is satisfying in a different way. I'm currently building up my core team with their alternate weapons, while still trying to move the story line forward on occasion.

Both games are playing into my favorite gaming activity: meandering. Boy oh boy, I'm a meanderer.

Charles Husemann
Call of Duty: WWII is still my jam and I finally hit my first prestige last week. It's still a fun and mindless game but I'm really just waiting for something else to grab me but so far nothing has. I was hoping that Fortnite Battle Royale might do it but so far I've spent most of my time parachuting out of the bus and being shot moments later. I do like how the tension ramps up the longer you survive but I still struggle with the construction mechanics, which puts me at an immediate disadvantage to everyone else.

Randy Kalista
Focus, Randy, focus. It's Assassin's Creed Origins for me, road to The Lost Ones and Curse of the Pharaohs DLC. I'm in my mid-30s, level-wise, so I'm inching closer to the level 40 cap and narrative end game. Still a lot of map to uncover, though. So much Sahara, so much Nile. Many sandy, very inundation, wow. I've never seen so many interactions between a main character and children, though. I mean, yes, you lose your son in the very beginning. But I didn't expect Origins' missions to meaningfully cross paths with the lives of so many kids. The origin of the Brotherhood of Assassins is the story of mothers and fathers, not just of masked villains and Illuminati conspiracies.

Be cool, Kingdom Come: Deliverance. I'll be back. Just got a little more business to handle down in the land of the pharaohs.

Rob Larkin
Planning on spending this weekend on tying up loose gaming ends, specifically finishing the campaign in Horizon Zero Dawn, finishing a long outstanding review in ARK: Survival Evolved, and polishing off the platinum trophy in Fallout 4. I will not be doing anything VR until I can find a better way to secure my base stations as I had one fall down twice this week.

Nicholas Leon
This weekend will see me hopefully beating the initial stages of Bloodborne. I finally downloaded it from PlayStation Plus and have been enjoying getting my butt handed to me by the weakest of enemies. This is my first Souls game, and I'm finally experiencing the joyous frustration everyone talks about with these games. Hopefully I'll get better at it. Hopefully.

Kevin O’Connell
With the rapid exodus from the vanilla game known as Q.U.B.E. 2, I turn my attention toward other conquests. I am still reeling from a game that actually caused more nausea than excitement, but I'll make it...I think.

I promised myself that I would revisit Call of Duty: Infinite Warfare and this week should do nicely. I can honestly say I am impressed with the graphics—especially the cutscenes, but are left lukewarm with the storyline and space fighting. I have never played an above-average game this slowly and I can honestly say I have no idea why. Time to look further into it.

Basketball...I need to find a basketball game. I have not balled for quite some time and rather enjoyed doing so for many years. Hopefully by next week, I will have some news on this front. I am surveying the field to choose. Comment your favorite for a vote.