Surprise!  There’s a new Planet of the Apes game! No, not that one. A different one.

Having waited an appropriate amount of time following the thudding arrival of last year’s adventure game Planet of the Apes: Last Frontier, FoxNext VR Studio has poked their heads out and announced a new POTA title for all major VR platforms. Crisis on the Planet of the Apes will release on PS VR, Oculus Rift, and Vive HTC on April 3rd.

To be fair, Last Frontier was developed by The Imaginati, a completely different studio (though according to the trailer, The Imaginati were involved in this new game on some level). It is interesting that FoxNext VR have been developing their title with very little visibility, with this announcement flying out of left field last week. When Last Frontier crashed and burned upon entry, FoxNext VR must have pulled down the blinds and forged ahead in stoic silence.

The new game takes place between Rise of the Planet of the Apes and Dawn of Planet of the Apes. Players play as an ape that has been captured by humans and held captive in a science lab. The player character must escape and return to Caeser and the rest of his ape homies. There are a few new characters, both human and ape, to interact with on your quest to escape the dirty humans and return home.

According to a post on the PlayStation Blog, Crisis uses the Move Controllers (and their equivalents on other systems) to provide new and interesting control schemes.  “When you hold your hands out in front of you in Crisis, you won’t see controllers or even human hands, but furry, muscular ape arms. When you walk, you won’t do it by just holding it a button or warping through the world. You’ll have to learn how to move like an ape – swinging your arms in the real world as an ape might move.”

The newest iteration of Planet of the Apes is one of my favorite sci-fi franchises of recent years. It will be interesting to see if this new title delivers an experience worthy of the high bar set by the films.

Crisis on the Planet of the Apes is available for pre-order on the PlayStation Store, at a the discounted price of $10.04. 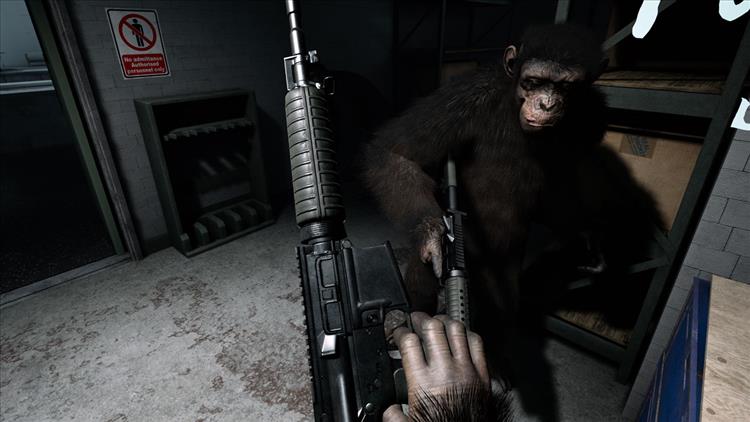