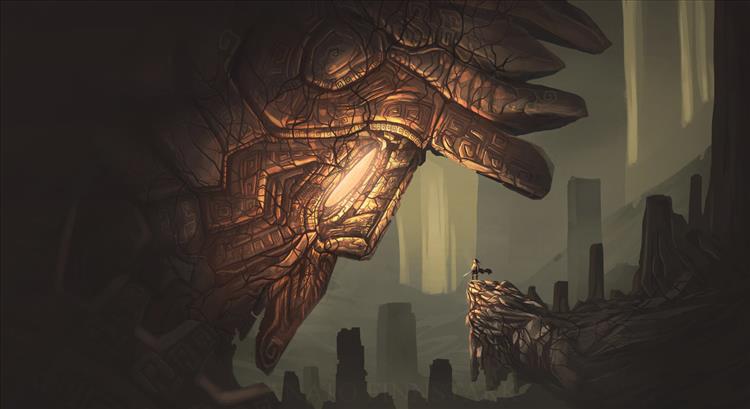 [Shadow of the Colossus illustration by Anato Finnstark]

Indie action-RPG Imperatum has a dynamic difficulty level that rises and falls with the value of Bitcoin. Madden NFL 18 predicts Tom Brady will throw for 342 yards, three touchdowns, and one interception, for a 24-20 Patriots win over the Eagles in the Super Bowl. And, from Ninja Gaiden to Contra, here's a look at some classic video game cover art from the late Bob Wakelin.

Dave Gamble, Staff Writer, dgamble@gamingnexus.com
We had one day of unseasonably nice weather a few days ago and that promoted me to go out and fly my little flivver for the first time in a couple of months. That awakened the hibernating appetite to fly but, alas, we always pay for a fine day with a string of not-so-fine days. Flying was out of the question, but not out of my interest. For that reason I have been spending the majority of my play time droning around the sky in the excellent VSKYLABS Douglas DC-3 / C-47, a venerable twin-engine cargo plane that made significant contributions to commercial aviation. That is a treat in and of itself (since I rarely splurge on payware) but I was also doing it in X-Plane 11 VR Beta.

This beta, distributed for free to all X-Plane 11 owners, demonstrates what I feel to be the best VR cockpit implementation ever. I am able to fly entire flights with nothing but the Rift Touch controllers and a set of rudder pedals.

Eric Hauter, Staff Writer, ehauter@gamingnexus.com
While I am finding it very difficult to drag myself away from Monster Hunter: World, I managed to play through all of Cold Iron for review last weekend, and found it to be challenging and fun. This week I am embarking on the surprisingly huge and intricate Digimon Story Cyber Sleuth – Hacker's Memory (that's a mouthful). My sole history with the Digimon franchise involves a pair of Digimon Sneakers I bought for my oldest son when he was around seven years old. I am attempting to ramp up my knowledge and understanding of Digimon as I dig into the game, and I am surprised at the scope and depth of what I am finding.

I am also still playing Batman: The Telltale Series in five-minute increments. I ought be be done with the first season sometime in May.

Charles Husemann, Editor-in-Chief, @chusemann
Last weekend my niece made us finally open the copy of Super Mario Odyssey that we picked up when we bought our Switch. After watching her play it for a bit I got into it and got hooked. I've never played a proper Mario game beyond the first few levels and, I have to say, I get the appeal. The layers and mechanics of the game are nearly perfect. Sure the plot of the game is a bit tired but the gameplay is gaming bliss.

I'm still logging time with Call of Duty: WWII's multiplayer component. Much like Mario the various systems are well-executed and a blast to play. I prestiged my first two weapons and divisions this week, so I'm trying to work those back up as well as leveling up my character.

Randy Kalista, Staff Writer, rkalista@gamingnexus.com
I'm at a loss. Having just played Shadow of the Colossus for the first time, I don't even know where to go from here. I read a headline recently about a guy trying to inflict brain damage on himself so he could play Skyrim again like it was a brand new game. Now, I'm not saying I'd do that to myself for a replay of Shadow of the Colossus. Surely I...nah...I mean, I shouldn't.

But duty calls. The first season pass content for Assassin's Creed Origins is out in the wild. I need to parkour my way up from the mid-20's to level 40 before The Hidden Ones DLC opens up for me. In the meantime, it's a safe assumption that Origins DLC 1 will just be more Origins on the Sinai Peninsula. That's not bad. Origins' Egypt is fully and wonderfully made. It's just that when it comes to open world design, I'm not getting over Shadow of the Colossus anytime soon. Sorry, every other video game in existence.