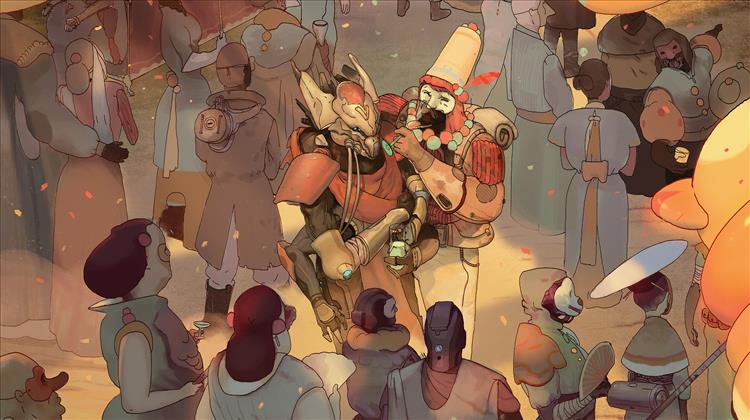 People are using photo modes to share, reinforce, and even subvert one another's stories, apart from developers' intentions. Star Citizen says Crytek's lawsuit against them is simply for the sake of garnering publicity. And games were more successful than ever on Kickstarter last year—we mean board games, not video games.

Sean Colleli, Staff Writer, @scolleli
I conquered the grueling, three-part Trial of the Sword in Zelda: Breath of the Wild so I'm the proud owner of a fully-powered Master Sword. The trials themselves were an interesting challenge rush of sorts. If you die at any point you go right back to the beginning of that sequence, and the environment and enemy variations can get pretty devious. So, the stakes were high. It reminded me of when I first started BotW; hungry, scared, and sneaking through enemy camps in my underwear, desperate for some decent armor and something more dangerous than a twig to wield. So now that I've proved my worth I can finally beat the Ballad of the Champions and then put Ganon down for good. I am a touch annoyed that even after suffering through the trials, the Master Sword still runs out of power eventually and needs that 10-minute cooldown. It lasts a heck of a lot longer than before and it always does max damage, but considering the effort I put into beating those trials, I wish it just stayed powered up forever.

Dave Gamble, Staff Writer, dgamble@gamingnexus.com
I'm spending a lot of time relearning how to fly in X-Plane 11. Pretty much out of the blue, the latest open beta update brought full VR to what was already one of the premier PC-based flight sims. Prior to this beta, Aerofly FS2 was the only usable reality-based VR flight sim that would run well on my nVidia 1070. With the price of a 1080 Ti remaining firmly above my comfort zone and seemingly poised to stay that way for quite awhile, sims such as DCS World are shelved for the foreseeable future. Aerofly performs well in VR, but that is very likely because it does not have a great deal of depth. For the few interactive items in the cockpit, the mouse is the only option. Flight control still requires an external controller. With X-Plane 11 (beta), the VR controllers can be used for everything except rudder control. Flying with Rift Touch controllers versus a Thrustmaster Warthog HOTAS requires a tremendous amount of practice to do well, though, but the benefits are vast. It is proving to be well worth the effort.

Eric Hauter, Staff Writer, ehauter@gamingnexus.com
My sons and I reengaged with Star Trek Bridge Crew (re-engaged, get it?). We are attempting to play through all of the story missions over the next couple of weeks. The game is fun with randoms, but really shines when you play with people you know in real life. We happened to get teamed up with a guy from Louisiana, who rounded out our group of three quite well. Unfortunately, we were kicked from the game before I was able to friend him, so I guess we won't be seeing him again.

I've also finally taken a swipe at EVE: Valkyrie – Warzone. I am terrible at this game, absolutely abysmal, but I kind of love it. The freedom of 3-D dogfighting in VR is overwhelming. There also seems to be a small community still playing, which is nice for a VR multiplayer game. I don't have to buy a bunch of copies and provide my own friends.

I've been continuing with Golf Story on Switch and Final Fantasy VI and XII, and last night I started goofing around with Telltale's Batman game. I do enjoy a nice free Telltale title, and this alternative take on the Batman mythos is like it might just pull me in for a full playthrough.

Charles Husemann, Editor-in-Chief, @chusemann
Last weekend I made the mistake of firing up Galactic Civilization III late on a Friday night. The ugly look I got from my dog when I came to 2AM reaffirmed that this was a mistake and that I should know better. I'm still relearning a lot of the mechanics of the 4X genre, but Gal Civ III is a cruel, cruel master. My second game back had a mysterious police keeping force show up and destroy my fledgling empire for no reason (OK, I might have destroyed a few colony ships so I could colonize a crucial planet), and my third game ended when I used cultural influence to flip a few worlds to my favor, upsetting one of the major galactic powers. This weekend I hope to learn from those mistakes—and a few wikis—to see if I can survive a bit longer.

I'm also going to be playing a bit of SoundBoxing VR, which is a cool VR exercise game that allows you to build workouts from YouTube videos. Think DDR but hooked up to a near unlimited source of music. The game is well done but is limited by the content junkyard that is YouTube.

Randy Kalista, Staff Writer, rkalista@gamingnexus.com
My return to Elite Dangerous made me miss a New Year's Resolution workout, a church Bible study, and my Mom's birthday. It's been a busy week. I may be a terrible son, Christian, and gym goer—but at least I flew through the center of The Iris Nebula, traced the Cepheus constellation across the night sky, and scanned a few undiscovered stars between Sol and the Veil West. I've never been happier in a space sim than when I look down at the instrument panel and it says nothing but "deep space" for my location.

I'm working on my appreciation levels for Mass Effect: Andromeda's not-so-self-serious tone. The ongoing psychiatric evaluation of my particular Scott Ryder says he's compassionate but not compulsive. But my Give Andromeda Another Chance! campaign may be stunted until I can tear myself away from the loving relationship between me and my throttle and stick. You heard me.

A buddy gave me Ready Player One to read as a late Christmas gift. So I guess I'm obligated to do that now. Hopefully the novel excites me more than the flatlined internal reaction I'm getting from the movie trailers.

Rob Larkin, Staff Writer, @Rob_GN
Three-day weekend, so I’m hopeful to get some gaming in. The only things really on the menu are the continued housekeeping of Fallout 4 and Destiny 2 as I take those last steps to the platinum trophies. Most likely I’ll concentrate on Fallout and explore the post-nuclear Boston now that I’m a resident of the Commonwealth in real life.

Nicholas Leon, Staff Writer, nleon@gamingnexus.com
Outside of hanging out with friends and working on my thesis on what will be the last first weekend of my college career, I think I'll more than likely be getting in on some Battlefield 1 and Persona 5 gameplay. Battlefield 1 is still energetic, and I think that they'll be finishing out the last of the DLC this year. On the other hand, I think I'm about halfway through Persona 5 (I looked things up), and I gotta say: I am sad. This game is so awesome. I can't believe what an innovative title I've missed out on for the past year.