Forza 7 - A final review of the best driving sim to date... but is it still?

As I slinked the Ferrari 360 Scuderia across the finish line for the last race in the Forza Motorsport 7 career, I was envisioning a mother-lode of celebration and cut-scenes that would make Marvel ecstatic. What I got was a corny, half-baked set of lines from the voice-over and a tuxedo driving suit. That is the way of Forza - ever since its inception - you win, you see a trophy, you move on.

Looking at my stats, I have driven just a tic over 6000 miles in 63 hours. That is roughly the distance from my house (near Pittsburgh, PA) to Los Angeles, back, and back to Los Angeles. That is after beating the first round almost two other times, so needless to say, I've driven this game into the ground. On top of that, I've spent over 14 hours upgrading cars, and have owned/driven 200 of them.The career, minus some 60 races that I did on my own, is a huge undertaking that spans more vehicle types than any car game ever. Rigs, buggies, GT, P1, off-road, - the list is quite long.

Now don't get me wrong, Forza Motorsport 7 is no way near perfect. In fact, it is the most "glitchy" Forza I've ever played. There are times scrolling through lists of cars that the information (including whether you own it or not) is for a different car than the one that is pictured. There are at least a dozen cars that have lights that light up during breaking that shouldn't, lights that stay lit when the shouldn't and lights that don't work at all. Car's spoilers, accessories, and color schemes will disappear when going through loading screens and not return until you make some change to the race. The best fun was a set of races with a Ferrari where every time I was bumped on either side, the mirror would lose the stem to the mirror, but the mirror would stay and just float next to the car. It is amazing that in a game so polished everywhere else, QAC missed a over a dozen different problems in the game.

The difficulty of the game is sporadically flawed too. There are 2 tracks that Forza has changed where their difficulty spikes so high, that you typically have to change the difficulty level by two or three settings. Road America and Sebring Raceway were two tracks that I "owned" in previous Forzas, but are currently so skewed that I have to change the difficulty one or two levels, or win by a tenth of a second. Example: I drove the Lamborghini Diablo SV on every track in the game, starting in 12th place, against the same category cars. My average win was by 12 seconds (the free play IS a some easier than the career) and my best lap was, on average, 4 seconds faster. Road America was beaten in a scant 1.2 seconds and my best lap was slower than the next car by a full two seconds. Sebring was 3.3 and .1 respectively. They were wins for two reasons. 1. The Diablo SV is a giant amount faster than the others in the category, especially on tracks with a big straight. 2. The difficulty for the free play is less than the career. Unfortunate that on two of the tracks things were so haywire.

The two tracks aside, the driving in the game is genuinely excellent. The cars in the same fields drive differently and have powerbands in different spots of the gearing. The tracks are, for the most part, challenging and beautifully displayed. The pits on the endurance races work like clockwork and add to the excitement for the long races. Wet races are no longer a fight of futility through puddles that throw the car sideways, but more a nice change to the same ol' and add just enough of extra challenge to the races. And the sounds... oh, my. The GT350 is a car I could, as a gear head, sit and listen to for an hour. The guttural over-run of the Ferrari's; the high scream of the Aventador's; and the gnarly strain of the 1000 horsepower Mercedes rig all provide a fantastic noise to match the graphically gorgeous vehicles.

The late additions to the game - Forzathon, Auction House, Leagues, and Marketplace - are a bunch of hit and miss. The Forzathon is very good but sometimes doesn't recognize the challenge and you are forced to re-race to get the next challenge. The Auction House is the best Forza has created. I ended up saving 8.1 million in purchases, and made over 10.4 million in the auction house selling cars. Seems excessive, but cars can be really expensive and I owned 200 by the end of the career. The Marketplace is the typical DLC purchasing that Forza has always done. Buy the car pass for a bunch, buy a car pack for $6.99, or buy a car you have to have for a couple of bucks. It has been my opinion that it is too much to pay after buying a $60 game, but it isn't Battlefront II either. And with that thought in mind, the powers-that-be have also fixed the Prize Crates to give much stronger returns and less chance of "duds". It is still not a great part of the game, but it works "ok" now. Last and least of all is the Leagues. I have never seen such a lousy duplication of multiplayer in any game - ever. The multiplayer is bad anyways due to the cheating, tune-theft, and bumper car playing, but to add a second garbage multiplayer with an added "theme" is just an extra crap-flavored bullet for advertising.

When all was said and done, however, I have thoroughly enjoyed my 80+ hours of Forza Motorsport 7. I haven't liked a Forza product to this degree since Forza 4 back in 2011. There will always be flaws to the great games even though I'm sure some will stand by their views of perfection, but there is no denying that Forza 7 gets past its demons to give the best overall driving experience you can get. There are games slightly more technically substantial and some that are a bit less glitchy, but there is still no car sim on the market with as much stuff as Forza 7 has to offer. 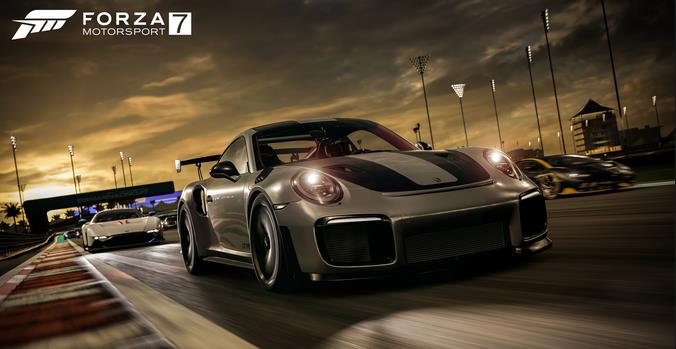