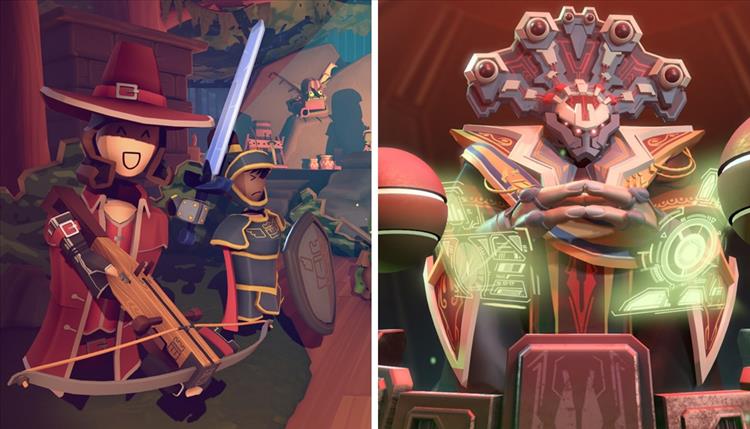 It’s that time of year when we gather with family to eat slabs of a large flightless bird and, for the most part, ignore the fact that some Native Americans call Thanksgiving a Day of Mourning. Belgium leads the way in declaring loot boxes a form of gambling, stating that Battlefront 2 “is a Star Wars-themed online casino designed to lure kids into spending money.” And after roughly six months, Civilization 5 designer, Jon Shafer, leaves Paradox Interactive due to “creative differences.”

What are you playing this Thanksgiving Weekend?

Russell Archey, Staff Writer, @NeoScyther
I won't be doing much gaming this weekend between Thanksgiving dinner and then working Black Friday and Saturday. The fun of retail during the holidays. So, any free time will likely be just resting in front of the TV. Any time I do find to play games will likely be spent playing Ninja Showdown, 88 Heroes: 99 Heroes Edition, and Conga Master Party for the Nintendo Switch in preparation for my upcoming reviews. The games themselves are simple and can be played in spurts for the most part. They're perfect for relaxing after being on my feet for several hours dodging customers and trying to navigate what little room there is to walk in a packed store.

Sean Colleli, Staff Writer, @scolleli
I'm working on my review for Resident Evil Revelations 1 and 2 for Nintendo Switch. It's a weird situation, since RE Revelations began life on a Nintendo portable—the 3DS—and now it's come full circle. I'm also picking up Axiom Verge Multiverse Edition as I've heard nothing but good things, but I wanted to hold off and play it on Switch. As the game is a huge homage to Super Metroid, it only seemed appropriate. I might also haul the Wii U over to my folks' house for Thanksgiving, for my family's semi-traditional Smash Bros. and Mario Kart tournaments.

Kinsey Danzis, Staff Writer, kdanzis@gamingnexus.com
Since I have to answer the war horn of retail workers on Black Friday weekend, I'm going to have approximately three seconds of game time this weekend. The struggle is going to be resisting the tech sales—but since I'm going to be on the clock for most of Friday, my job solved that one for me. I'll probably come home and try to unwind with Sky Factory 3—which, by the way, is far more engrossing than I ever thought Minecraft could be—but I won't have time to really delve into my other current fascinations, RiME and Middle-earth: Shadow of War. Yes, I am still playing Shadow of War this long after my review—or rather, I'm trying to play it, because retail holiday season started a few weeks ago.

Dave Gamble, Staff Writer, dgamble@gamingnexus.com
As advertised last week, I jumped back into Elite Dangerous, albeit in glorious VR. I wish I had done this sooner, but with hundreds of VR hours under my belt, it wasn't the awe-inspiring event that it would have been back in the days when it was all fresh and new. There was also, of course, a fairly decent learning curve to surmount before I could control at the least the most common tasks solely through the use of my HOTAS system. Once I got more or less up to speed, I decided to take an honorable path in this world, having learned from Red Dead Redemption just how easy it is to fall into a life outside the law, whether intentional or not. Mining is a grind, so I decided on cargo hauling. My quandary now is how to learn market prices on far away trading planets/stations without resorting to external websites. With only four cargo slots, I can't afford many mistakes on the economic front.

I'm also spending a lot of time in the Drone Racing League Simulator, for which I am working on a review. They warned us right up front that this is a ultra-realistic simulator and all that that implies, which in action means it's really, really hard to fly. It's an FPV presentation, which takes a great deal of getting used to, and it models racing drones which typically don't have all of the fancy gyros and such to make them behave in a preternaturally sedate and stable mode, although there are some optional settings for those that want or need that level of hand-holding. That's not for me, though: I have been flying RC airplanes since 1975, and real airplanes since 1982—these toys should not provide too much of a challenge to me, right?

Wrong! Completely and utterly wrong! In fact, every single bit of that prior experience makes it harder! As it turns out, drones do NOT fly like regular fixed-wing aircraft. For this week, I'm going to step away from the drone sim and start taking a look at Star Control: Origins, or at least the first available component of it, Fleet Battles. I have never designed, flown, or fought a spaceship—that ought to make it a piece of cake, right?

Eric Hauter, Staff Writer, ehauter@gamingnexus.com
Rec Room drops on PS VR this week, so I am looking forward to spending some time dorking around online with that.

Beyond that and family obligations, I'm going to continue on with Horizon Zero Dawn, which continues to impress now that I've gotten through the training wheels area and have been set free on the open world. Worms Battlegrounds has been getting a lot of love around the house too, so I'll probably put in some time on that. After all these years, Worms still makes me roar and swear.

Randy Kalista, Staff Writer, rkalista@gamingnexus.com
My review for Northgard is coming along. I've tried out each of the Viking clans. There are six. The game isn't meant to be a days-long slog like Civilization. More like a tighter few hours' worth of board game time. Well, the games have been shorter for me since I haven't found a winning strategy yet. The entire board wants me dead. If it ain't the wolves, then it's the draugr. If it ain't the draugr, it's the other Vikings. If it ain't the other Vikings, it's the freezing winters and the lack of firewood, or the rats eating up my stored food.

After two-years and change in Steam Early Access, RimWorld transitioned from alpha to beta this week. There's a new swamp biome. New storyful combat ("Chuck struck John with a mace, bruising his jaw while wearing a savage look"). There are new furniture bits and pieces, devastating orbital bombardment weaponry, psychic-alteration devices, and—goodness gracious—new mental breaks to destroy your RimWorlders' relationships. Hm. Sounds like a prediction of how Thanksgiving at my parents' will go this weekend.

Rob Larkin, Staff Writer, @Rob_GN
I won’t be playing. I’ll be planning. On Black Friday I’ll be picking up a new PS4, graphics card, and everything else I need to start gaming again. But because I’ll be away at my auntie's house for the Holidays, I won’t actually be able to plug anything in and play until I get back home next week. Unless I get a PSVR and the fam wants a demo. That could be arranged.

Nicholas Leon, Staff Writer, nleon@gamingnexus.com
Well I'll be celebrating my birthday this weekend, so, with any luck, I'll be able to get my hands on a copy of Battlefield 1 Complete Revolution Edition. Otherwise, it'll be wholesome family fun as I purposely left all of my games at school so I wouldn't be distracted from the papers I have to complete.

Kevin O’Connell, Staff Writer, koconnell@gamingnexus.com
As I am coming off a 1,200-mile trip I will be getting back to gaming ASAP. I am starting a review of the newest LEGO game: Marvel Super Heroes 2. Looks like a trip through Rocket-infested waters.

I am also revisiting Killing Floor 2 and Dungeon Defenders 2 because of some new content spotted. DD2 has a new Mastery Mode and is in the middle of an online Progression Event. Killing Floor 2 has new daily objectives, new vault rewards, and new gear.

I am also going through the ELITE races in Forza 7 to complete the game 2x through. Currently at 119th level with over 70 cars. But we all know that isn't enough. I'm also wondering if the "Leagues" portion will ever come to the game. It has been some 50 days and isn't here for the Thanksgiving break, so still not cool.