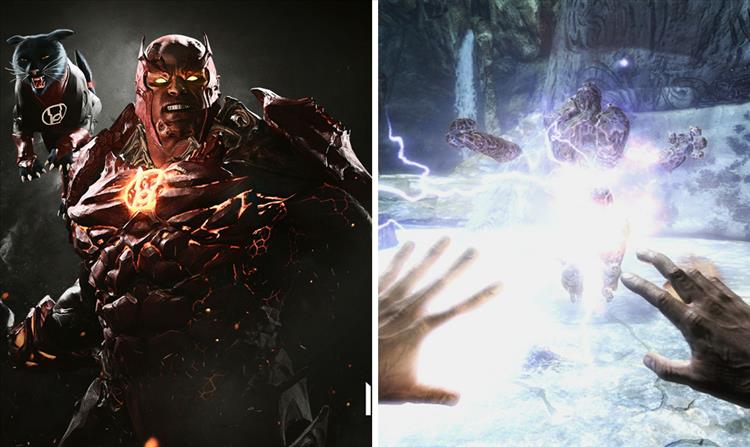 Star Wars: Battlefront II had an eventful week. It went from owning the most downvoted comment in Reddit history, to pulling down all microtransactions hours before launch. Despite having a Jewish protagonist that kills hundreds of Nazis, Wolfenstein 2 is blocked from download in Israel. And Tesla CEO Elon Musk hires a lot of video game programmers; one of his latest is video game engineer Scott Simms from Microsoft, who worked on Halo 4 and Kinect Sports: Season 2.

Sean Colleli, Staff Writer, @scolleli
Curse you, Todd Howard! I thought I had left Skyrim behind many years ago, and closed The Elder Scrolls to slumber until the inevitable sixth chapter. I assumed reviewing Skyrim on Switch would be a relatively quick "How does it run and look?" affair. But now I'm sucked back in all over again, compulsively transmuting iron ore to level my smithing, enchanting and alchemy. Y'all got any more of those blue mountain flowers?

I might be able to tear myself away long enough to continue my memorial playthrough of of Dead Space 2. If Dead Space was Alien: The Haunted House, then Dead Space 2 is definitely Aliens: The Roller Coaster. I forgot just how unrelenting the pace of this game was. It makes me even sadder that Visceral is gone and we'll probably never see greatness from this sci-fi horror series ever again. Press X to pay respects...and to stomp a Necromorph.

Dave Gamble, Staff Writer, dgamble@gamingnexus.com
I'm currently running through High Hell, an ultra-short (well, for people other than me, who has been stuck on Level 10 for a longer period than it took me to get there) FPS done in a minimalistic style that puts run-of-the-mill minimalism to shame. At the end of Level 9, I would have described it as "fun." Now I'm not so sure. I'll walk away and pout for a few days before trying it again.

In the meantime, I'll get started on The Drone Racing League Simulator—note that this one is also bound to end up in ignominious surrender. I've taken something of an interest in Drone Racing, but I don't think a half century of seasoning is going to have done wonders for my reflexes or hand-eye coordination. At least if High Hell is a reasonable measure, anyway.

When not in review-prep mode, I'm thinking that it might be high time to start over with Elite Dangerous. I burned myself out on it last year after grinding away day after day as a miner, so I'll maybe pick a different specialty this time around. I would have tried it just as soon as I got the Oculus Rift because I fully expect it to be absolutely awe-inspiring in VR, but I had been long enough out of it that I would essentially be starting over. That remains the case, but this time around I will have a lot more patience since I no longer have a lengthy list of "I can't wait to see this in the Rift" to work through. It's also coming up on winter and real-world flying is going to go into semi-hibernation, so I'll likely spend some time doing instrument approaches in Flight Sim World, which I fervently wish was playable in VR like Aerofly FS2, which I fervently wish had clickable controls to the extent that FSW has.

Eric Hauter, Staff Writer, ehauter@gamingnexus.com
I have been playing Mad Max on and off for a couple of months, but my wife finally put the hammer down on me playing it in front of our four-year-old. Something about her waking up with nightmares about the awful violence and the deformed mutants. As a result, I picked up Horizon Zero Dawn last week while it was on sale for $20 on Amazon (score!). I'm hoping that a pretty lady with a bow fighting robot dinosaurs in a nice forest will go over a little better with the Pre-K crowd.

I've also been crying softly to myself, rocking quietly in place, while wrapped in a blanket, as I try to make forward progress in the 8-bit Adventure Anthology (Volume One). This game hurts me. It makes me feel like a dumb-dumb. Move to the left. Die. Move to the right. Die. Go down the ladder. Die. Your torch went out! Die. Look at the lake. Die. Stand in place. Die. Pick up a shield. Live! Oh, the fire melted it. Die. It's kind of awesome in the way this game is willing to stomp on your head. I'm hoping to have a review up by the middle of next week sometime, once my emotions have recovered.

Randy Kalista, Staff Writer, rkalista@gamingnexus.com
Wish I knew what to tell you. It's still nothing but Skyrim for me. In years past, as the weather cooled and leaves changed, I'd always find some MMO to dip into. I think this year, however, I just went with a massively single-player option. So, Skyrim it is. Survival Mode, of course. In my latest playthrough, I'm a Redguard "Spellsword." The Spellsword is a class that was last seen in Oblivion, but had been there since the very beginning in The Elder Scrolls: Arena. In this instance, it means I'm into swords, shields, spells, and light armor. That's nothing crazy, obviously. But it takes a little getting used to, since my usual build is heavy armor, two-handed weapons, and no magic. I just bought and fully furnished my home in Whiterun. Instead of an alchemy table, I installed a children's bedroom. As the dad of a seven-year-old, I apparently feel the need to get every kid off the streets in Skyrim, too.

To further sate my Scandinavian appetite, I'm looking at Northgard's Early Access. It's a real-time strategy with, to my untrained eye, quite a few board game sensibilities. Stuff like discrete regions of the board revealed all at once by scouts, or a maximum number of buildings that any one "tile" can support. Seems to tread the fine line between too much and too little info, which is the sweet spot for me. Still haven't figured out how to 4X my way into a winning position just yet. The winter, the wolves, and my unruly neighbors, so far, have all decided that I'm just not taking my responsibilities as a thane very seriously. My reign has met a bloody end every time.

Nicholas Leon, Staff Writer, nleon@gamingnexus.com
It's back at it again with the multiplayer in Call of Duty: WWII for me, this weekend. My favorite modes, War and Domination, are consistent bouts of chaotic fun. Sure, sometimes I'll get a team that seriously does not know what it's doing, but screaming at people who can't hear you is just half the fun of online multiplayer these days, am I right?

John Yan, Senior Hardware Editor, @TheJohnYan
I'm going to be spending time this weekend with Destiny 2 and Injustice 2. Destiny 2 is fun, but it hasn't grabbed me like a lot of others here. It's an enjoyable FPS and there are some gorgeous environments. I'll be playing some more to finish out my review.

Injustice 2 just hit the PC so I'm going to fight the good fight to take down Superman's Regime. Hopefully, the folks who did the port learned from Mortal Kombat X on the PC and we're able to have a good fighting game again on that side of things.