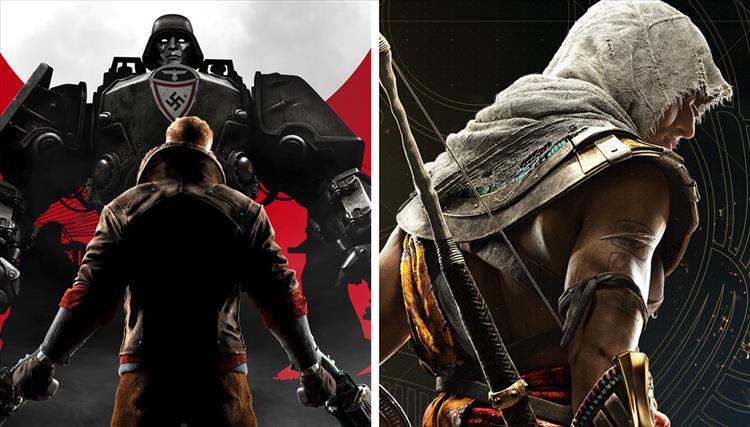 It's turning into a bad year for sexual predators. The NeoGAF forums were temporarily offline amid sexual assault allegations against the owner. Just in time for Halloween, Syfy looks at seven essential horror video games. Number six is the incredible Dead Space from now-defunct Visceral Games. And Something Something Soup Something is a web browser game about identifying soup. Hint: You know nothing about soup.

Kinsey Danzis, Staff Writer, kdanzis@gamingnexus.com
Now that I've finished playing Middle-earth: Shadow of War for my review, I'm playing it for fun in the little free time I have. Marathoning The Lord of the Rings trilogy has revitalized my love for the franchise and made it bearable for my partner, because she now understands what's going on when she's watching me play. There are tons of cool things, I know, but for some reason my favorite thing to do is still tame a small legion of Caragors and ride around with little actual direction, just killing captains that I happen to encounter.

Dave Gamble, Staff Writer, dgamble@gamingnexus.com
I've got Wagner's "Flight of the Valkyries" set to repeat ad nauseum as I get my Apocalypse Now on with a great little MMO called Heliborne. It's loosely based on World of [insert war machine here] but is far more engaging. As implied by the name, the military hardware focal to the entire endeavor is the helicopter. The game starts in the very early days of helicopter warfare, back when military commanders were still trying to figure out the best use for these odd little machines. I've been flying ancient, clumsy machines in the early days of the Vietnam War, although just today I was able to level up to the venerable UH-1 Huey, the only type of helicopter I've ever been able to cadge a ride in.

Graphically, this is a third-person view, but the battlefields of 'Nam are beautifully rendered and absolutely convey the smell of napalm in the morning. As far as play goes, each player gets a squadron of three helicopters, typically chosen to have one each of a scout chopper, a transport, and a gunship. Using these one at a time, a player can use the scout for finding enemy troop emplacements and/or to spot targets for mortar team, the transports for carrying troops ranging from light infantry to mortar teams, RPG gunners, and air-to-air missile-toting troops, and the gunships for air or ground attack. The idea, of course, is base conquest/defense.

Once I level up to some more modern equipment and gain a bit more experience, I'll be doing a review on it. Fantastic stuff at a bargain price.

I swear I'm going to get started on my review of OGRE any day now, but I cannot drag myself away from Heliborne, even with the review already written and submitted. The tech tree is easy to climb, but I'm enjoying the Vietnam era far too much to rush into guided missiles, countermeasures, counter-countermeasures and all of that complexity. Plus, well...there's just something to be said for loosing off dozens of unguided rockets accompanied by Wagner's "Flight of the Valkyrie" that I just love in the morning. And midday. And evening. If it wasn't for my nightly laps in Project CARS 2 and a VR room-escape/unlock-this-door puzzle game that I'm also going to review on a rigid commitment of "eventually," I wouldn't be using VR at all. I never thought I'd see the day when the Rift has gathered a fine patina of dust.

Eric Hauter, Staff Writer, ehauter@gamingnexus.com
This weekend, I'll be taking a second, and maybe third, run through Hidden Agenda, trying to not end up in a heap on the floor. I will also be continuing my endless playthrough of Legends of Heroes Trails of Cold Steel II on Vita, with occasional breaks for Civilization Revolution 2. And if there is time, I will get my son online to battle it out in a few rounds of Korix on PSVR.

Randy Kalista, Staff Writer, rkalista@gamingnexus.com
I'm neck deep in a sea of sand in the land of scarabs. That is to say: Egypt. Assassin's Creed Origins' Egypt. Which means we've finally made it, Brotherhood. After a decade of ignoring what Assassin's Creed players truly want, Ubisoft finally lets us surf down the sides of pyramids, parkour on the Sphinx, and see if Cleopatra looks anything like Katy Perry in her "Dark Horse" video. Assassin's Creed still wrestles with its core conceit, though. For a series that is made all the more thrilling from having a modern day sci-fi element, those elements are always boring as hell to play through. I mean, it certainly makes the player want to return to the historical part of the show. The controls take some getting used to. Ubisoft keeps changing the button mapping every other Assassin's Creed. Like it's still trying to figure out, after all this time, if it's more of a stealth game, a beat 'em up, or a straight up platformer. Time to strap back into the Animus.

Nicholas Leon, Staff Writer, nleon@gamingnexus.com
This weekend, I'll be doing one thing and one thing only: killing Nazis — in Wolfenstein II: The New Colossus. It's been an amazing experience so far, and I can't wait to laugh my way through this game again. To laugh with the great writing, not the violence. Although that can be funny, too.

Kevin O’Connell, Staff Writer, koconnell@gamingnexus.com
I am slowly coming down off the high that is Forza 7 and slipping into the abyss of fractured dreams and long waits. There is still no word on the auction house and Forzathon, so i'll be quitting and deleting everything forever!

OK, maybe I will play for just 20 more hours to pass the time and not thoroughly enjoy the game at all — that's what I'll do.

I also took a silver-ball ride on Pinball FX3's anti-coin but dollar-per-use ride and the review is forthcoming. It was pretty good...for all of four tables' worth.

Debating when a good day is to finally buy Destiny 2. John is partaking. Maybe I will, too. Must also get South Park's newest debauchery...so very, very sweet.

John Yan, Senior Hardware Editor, @TheJohnYan
Time to dig to bedrock in 7 Days to Die. Auger does its job. Leave me alone zombies!

Destiny 2 is calling. Time to see what all this hoopla is about. So excited!