Lego Dimensions is coming to an end

It's no secret that when it comes to the "Toys To Life" genre that Skylanders is probably the top contender, even though I seriously wonder how they can take the series further every time they come up with another concept for it. However, that's not to say that other games have see success. I was surprised when Disney Infinity closed up shop, especially after acquiring the rights to Star Wars and started releasing those sets, but I was even more surprised when I saw on Facebook that Lego Dimensions is coming to an end as well.

Over on their Twitter page they have an image that says that while they'll continue the servers and support for the series, including existing sets and packs, no new sets will be coming out. That was really surprising to read as while I've never played Lego Dimensions myself, it looks really interesting and I wouldn't mind giving it a shot. If you still want to give it a go, you might want to look into it now. It does seem like the current sets will still be around for a while, but they haven't said how long those will be in production. 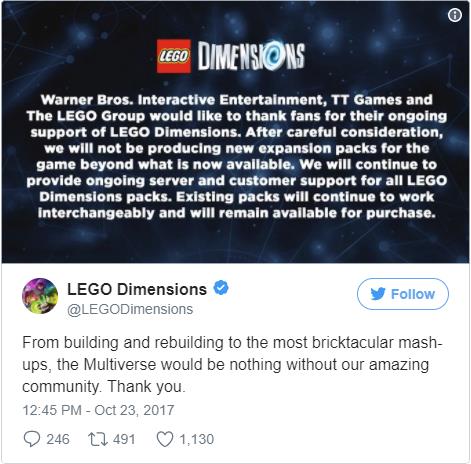