What we're playing: Lovers in a Dangerous Dead Space 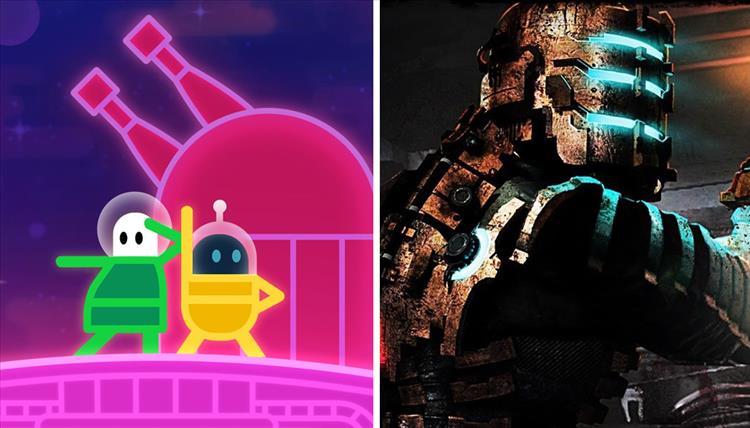 What does it take to play video games for a living? A lot of hours, a lot of stress. The age old question of difficulty rears its ugly head—its Cuphead, rather. And in the face of dwindling numbers, the Boy Scouts are beta testing a program with Gamestop. They're seeing if playing video games should become a part of the scout code.

Sean Colleli, Staff Writer, @scolleli
I'll be checking out Lovers in a Dangerous Spacetime with my fiance, as it's supposedly best played in co-op. She was on board as soon as I mentioned there was a cat in the game, but she does find the premise and gameplay rather puzzling.

Aside from that, I'll be starting a playthrough of the Dead Space trilogy to commemorate the life of Visceral Games and lament the studio's untimely death. It's a damn shame that EA shuttered them and I hope they all land on their feet. If EA, in their infinite wisdom, ever decide to resurrect the Dead Space franchise, it just won't be the same without its creators, Visceral Games.

Kinsey Danzis, Staff Writer, kdanzis@gamingnexus.com
In between balancing three jobs and reviewing Middle-earth: Shadow of War (which is giving me flashbacks to Middle-earth: Shadow of Mordor, by the way), I'm still enamored with The Sky Factory mod in Minecraft. Of course, that doesn't mean I'm any good at it; it took me a solid 15 minutes to figure out how to wire a solar panel to a cloche, and I still don't know how to get items out of the dang thing, but I'm having a fun time sucking at it. I do, however, have a very impressive chicken farm.

Dave Gamble, Staff Writer, dgamble@gamingnexus.com
My single-minded devotion to Red Dead Redemption is waning. My foray south of the border in my quest for Bill Williamson ended up solidifying my overall misanthropic feelings towards my fellow man. The utter brutality of both sides of Mexico's civil strife was appalling. Back home, I thought I'd just concentrate on doing good favors for people, right up until I spent days piecing together a bouquet for an older gentleman's wife. That, too, ended poorly. I have decided to finish out my stay by following treasure maps to the hidden stashes.

It's good to move on. I picked up a neat little game called Heliborne. At its very essence, it is World of Helicopters. I also picked up version 2.0 of World of Warplanes, but found it to be much less fun than the indie-developed helicopter-based alternative. WoW 2 doesn't seem to appeal to me any more than the original did, and for the same reasons. Heliborne, on the other hand, is still in development and the team is open to suggestions for improvement. Surprisingly and gratifyingly, they are willing to invest effort into improving play mechanics for people, like me, that prefer to play their massively multiplayer games solo.

Randy Kalista, Staff Writer, rkalista@gamingnexus.com
Out of left field, I'm finally playing Fallout 4's Survival Mode. New character. New problems. It was my intention to make the Wasteland scary again, and boy howdy. It has to do with the fact that I started taking damage from over-encumbrance. And that there's no game saving except when I sleep. No fast travel either. I've never been more desperate to find a dirty bedroll somewhere, anywhere, in Boston's outskirts. I'm an insomniac now, too. I'm sure that improves my situation. Dogmeat is more helpful than ever. If he holds down at least one of the half dozen feral ghouls sprinting toward me right now, I'm giving him a doggy treat back at the ranch. Because Survival Mode means I'm dealing less damage, and I can't take as much damage either. One or two hits from an enemy means I'm reloaded at that dirty bedroll 10, 20, or even 30 minutes back. I gotta eat cooked food, gotta stay hydrated, gotta get a good night's sleep. It's been painful so far. I hope it keeps bringing the pain.

Rob Larkin, Staff Writer, @Rob_GN
Last weekend of gaming for me probably until December. Woah. It's just sinking in.

I'm making the move back across the pond at the end of the month and in the process am selling my TV, computer monitor, PS4, and a few critical PC components to save on shipping them back—and for them all to rise from the ashes anyway around Black Friday/Cyber Monday.

So for my last weekend, my time will be split, mostly on my last review, ARK: Survival Evolved, and partly in Destiny 2 with a first attempt at a Prestige mode Raid clear.

Nicholas Leon, Staff Writer, nleon@gamingnexus.com
I've decided to take a break from Persona 5. It's a terrific game, and the turn-based combat is a step-up from other JRPGs that I've played in the past, but currently it's just a bit much to take on that sort of expansive, role-playing game. I think this weekend I'll dip my feet into NieR: Automata (I'm still on my second playthrough). I'm familiar and comfortable with the game, and the side quests are short and sweet enough to let me drop in every now and again.

I also just bought Fallout: New Vegas Ultimate Edition on Steam. I've heard that although it's playable, it is also prone to crashes. Here's hoping that I'm tech savvy enough to manage my mods that'll help it run smoother on my awesome near-gaming level PC.

Kevin O’Connell, Staff Writer, koconnell@gamingnexus.com
Well, they say the fourth time is a charm, so, through Forza 7 once more unto the breach, dear friends. I am positively annoyed at this point that Forza 7's other pieces are still MIA. There are plenty of people out there for a launch of the Marketplace and the Auction House, but both are still void. I have also concluded that the Prize Crates are mediocre at best. The 20k and 50k ones will allow you to make money back +5-10%, but anything bigger wastes money like a crackhead on a bender. They would possibly be fun if the monetary system were a whole bunch better. There are definitely times where I have needed money to buy a specific car to race and none could be found. In fact, there are only a couple races where the monetary windfall pays out more than the cost of the car you have to buy to race... and forget getting two cars. I can still say this is the best car sim of this year, but its execution isn't much better than Forza 4 or 6 to this point.

John Yan, Senior Hardware Editor, @TheJohnYan
Trying to find auger parts in 7 Days to Die. Such an arduous task. Why do dogs keep chasing me?! SO SAD!

Battle royale with another partner. Player Unknown's Battlegrounds is good fun. Dying is all I'm good at!