In the age of "Steam review bombing," PlayerUnknown's Battlegrounds is the latest target, with over 34,000 negative reviews this week. Steam pulled hundreds of "fake games" from Silicon Echo Studios, a studio that admits, "We have indeed sometimes been conducting our business with some practices people may call shady." And a U.S. Congresswoman called out an extremely racist video game, while the developers, in their defense, stated, hey, "We all listen to Jay-Z."

Patrick Aloia, Staff Writer, @PatchesAloha
Hey gang, I've been MIA but I'm back in full force with opinions and such. I've been playing Divinity: Original Sin II which has been an absolute blast. I just hit a portion where the difficulty curve truly spiked and I'm...kind of excited for it? I was reading an essay on how we need to fight against gaming's tendency to prioritize flow, rather than allowing it to dominate every space outside of the explicitly competitive ones, and D:OS 2 is a great argument for that. At the difficulty setting I have the game at, I was more or less breezing through the game. There was a sort of flow to the mechanical tactics of combat in that it was more about organizing pieces on a board rather than thinking individually about what those pieces could do. Dealing damage was king. At the point I'm at now, however, the environmental effects on the battlefield have become massively difficult, and in that I've had to re-understand the way I form my party. I've started slowing down for the story again and appreciating how richly drawn the characters are, and how excellent the voice acting is across the board. Worth thinking about, I think!

Russell Archey, Staff Writer, @NeoScyther
This weekend I'll be proving that you don't necessarily have to be a fan of a particular anime to enjoy a game based off of it, as I work on my review of Dragon Ball Xenoverse 2 on Switch. I didn't do much with the original game (got it as a freebie from a friend), but for someone who doesn't know much about the franchise beyond some character names, what obtaining all seven dragon balls will do, and the occasional meme about Krillan getting killed, that also means I'm going into this with no prior expectations and am looking at the game purely from a gamer's perspective, not that of a Dragon Ball fan.

Kinsey Danzis, Staff Writer, kdanzis@gamingnexus.com
I'm still trying to recover from the crushing blow that is Mercy's ult change in Overwatch. I mained her with Resurrect. I got great comp scores with Resurrect. I got her gold weapon with Resurrect. I loved her with Resurrect. I thought I'd be able to manage with Valkyrie, but it's just...not great. It encourages Battle Mercy (which I love, but is not great for a team dynamic and makes me panic-switch between my caduceus and my blaster a billion times) and the free-flying just doesn't seem very useful. It doesn't work for me; I wish they would have done something else to prevent Mercy mains from hiding when their ult was at 100%, like increase the power of damage/healing at 90% or above—anything to have kept Resurrect. So I'm still a bit heartbroken over here, but I'll manage.

Dave Gamble, Staff Writer, dgamble@gamingnexus.com
I just got back from a great getaway to Maine and was eager to get right back into Project CARS 2. I was raring to go, not least because SMS had pushed down a patch that was intended to make the AI slightly less stupid in places like turn 1, lap 1 at the Indianapolis Motor Speedway. Alas, they weren't able to make me any less stupid; after a spin that ended up slamming me broadside into the wall, I failed to take my hands away from the Fanatec wheel. The ensuing crash left me with a slightly sore left thumb resulting from the jerk of the wheel. Figuring I ought to play it safe for awhile, I jumped into a Ford Fusion stock car and loaded up the high banks of Daytona for a bumper-to-bumper race. That was fun, right up until I spun into the wall and, well, I'm sure you can guess...failed to let go of the wheel again. And, as it turns out, the AI is still pretty stupid, too.

With my left thumb sprained, I'm looking forward to a few days of reacquainting myself with mouse-driven EMPYRE: Lords of the Sea Gates in order to have a review ready later this week.

Randy Kalista, Staff Writer, rkalista@gamingnexus.com
I'll salt and pepper the coming weeks with more Destiny 2. My warlock is sitting cozy at 270 power, though I still have plenty of content to chew up. Some leftovers on Titan, adventures on Io and Nessus, as well as replaying story missions on every planet for legendary loot. PvP will never be my bread and butter, but I could at least do the two mission-requested Crucible matches, then take the money and run.

I'm replaying Red Dead Redemption. I poke my head back in every year, but this is the first time I've made a concerted effort to relive the story, from starting in New Austin, to Nuevo Paraiso down south, then all the way up to West Elizabeth up top. Just turned in my first bounty. Sure, the guy was alive when I caught him, sheriff. Didn't know he had to survive the 150-foot cliff drop along the way in order to get the 'alive' reward. The game is beautiful even in 2017; doesn't look half its age (it's seven years old—eight by the time RDR 2 is out). Opinions are just opinions, but this is still Rockstar's best game by a country mile.

Rob Larkin, Staff Writer, @Rob_GN
I'm settling into my Destiny 2 routine on my main character so that opens up a lot of free gaming time for other pursuits. Unfortunately I'll probably use that time to get stuck in with even more Destiny 2, leveling up my alternate characters through the main storyline to the endgame. If I do deviate form D2, it will probably for last month's free PSN game, Infamous Second Son. I've played the first two and the prequel to this one, so it's been on my list for a while.

Nicholas Leon, Staff Writer, nleon@gamingnexus.com
Well, the original Star Wars Battlefront servers are back online (cough, marketing, cough) and I think I might just have to dip my toes into that pond again. Sixty-four-count multiplayer on maps and gameplay that still holds up? Sounds like a good time to me. I also just downloaded the very first Fallout game, so it looks like a PC weekend so far.

Kevin O’Connell, Staff Writer, koconnell@gamingnexus.com
I have to say I will be playing Forza 7 for the foreseeable future. The career makes it possible to redo with completely different races so I may even reload again. Diggin' the Ferrari F40 and 288 GTO. They are faves, but the over-run is music to my ears. I am also running through the Rory McIlroy PGA Toure from a while back—doing the career. It is the best career I've played in a golf game. Recorded my first hole in one a few days back—too cool. 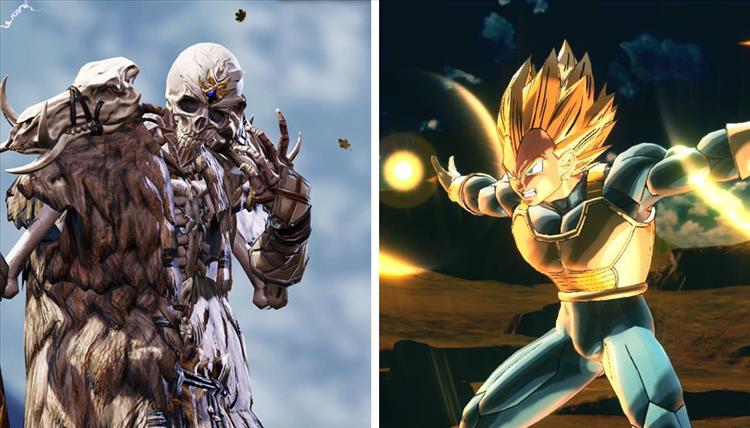