What we're playing: The Fortnite Journey Down 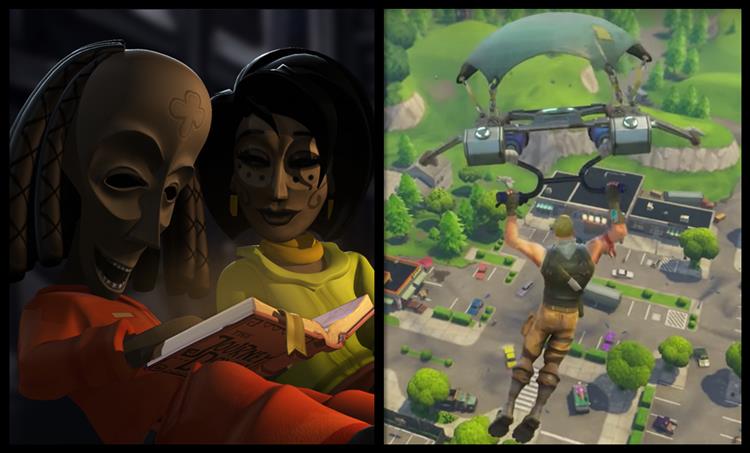 The Beastie Boys broke their own "no-ad" policy (again) when lending "Sabotage" to that live-action Destiny 2 commercial. PlayerUnknown's Battlegrounds did the unthinkable when it surpassed 1 million concurrent players on Steam—then PUBG did the unthinkable again when it broke DOTA 2's all-time record for most concurrent users ever. And indie pop project Japanese Breakfast had a browser-based game made (called Japanese BreakQuest) you can play right now, a JRPG based on her sci-fi AI love affair track, "Machinist."

Sean Colleli, Staff Writer, @scolleli
I finally got my entertainment system set up at the new apartment, with all the appropriate consoles. I think Hofstadter's Law is basically a way of life for me at this point. I also picked up Conker: Live & Reloaded during some retro collecting. I played the original Conker's Bad Fur Day on N64 a very long time ago and loved it, so I'm interested to see if the Xbox remake is as much of a travesty as everyone says it is.

I'll continue to dig into Fortnite on PC for my upcoming preview. I might also pull Super Mario Sunshine out of storage to show it to my fiancée. She's an old hand at the 2D Mario games but was lukewarm on Super Mario 64, and didn't connect to the Wii controls of Mario Galaxy 1 and 2. That said, she got hooked hardcore on Mario 3D World and her general 3D adventure-platforming acumen has improved dramatically from the hours she's sunk into Zelda Breath of the Wild. So basically, this is going to be an interesting weekend.

Kinsey Danzis, Staff Writer, kdanzis@gamingnexus.com
In between working on my review for The Journey Down, I'm still chipping away at Pokemon Sun. I've long since beaten the campaign, but since I'm reviving my Pokemon career anew I want to fill the Pokedex entirely, and amass a nice collection of legendaries, without transferring my own Pokemon from previous games. It's slow work, but that Rayquaza I have now makes it seem pretty worth it—especially since I traded it for a Ditto, which aren't too hard to come by in Sun.

Dave Gamble, Staff Writer, dgamble@gamingnexus.com
Need you ask? Project Cars 2! What do you mean, "What else?" What else is there?

Charles Husemann, Editor-in-Chief, @chusemann
More Destiny 2 for me as I try to level up my Titan. I know there is no way in hell I could ever set aside 10-plus hours to do a raid but I'd like to say that I would be ready if I could. I may also dip my toes into NHL 18 if time permits. But with a major work release going on this weekend, that is a bit of a pipe dream.

Randy Kalista, Staff Writer, rkalista@gamingnexus.com
I'm less willing to bang my head against tough-for-tough's-sake video games at the moment. Which makes Songbringer something of a heartbreaker for me. I like the mixed up puzzle pieces of a map, and I like the particle-heavy 8-bit paintbrush, and I do like—but just don't love—the "you're never getting off this planet" difficulty. Perhaps Songbringer tries too hard to act like it's not trying too hard, which makes me not want to try too hard either.

Here's the part where I continue copy-pasting Destiny 2 in my What We're Playing submissions for the next, oh, let's just guess three or four months. Unless I suddenly get a hankerin' for Assassin's Creed Origins, my AAA gaming calendar is pretty much wrapped for the year. I've got my eye on dozens of indie titles, sure, but those won't be stealing hundreds of hours at a time away from my warlock, so we'll see. Destiny 2 isn't a perfect game. But it's perfect for me right now.

Rob Larkin, Staff Writer, @Rob_GN
It'll be Destiny 2 this weekend for me. After getting to the final battle in the raid last weekend, but running out of time with the fireteam and falling short, I'm keen to take another shot at the king. I've got a pretty good group to run with. I think we have the mechanics of each section down, to the point we should be able to cruise back to where our progress was before the reset. Going to take some sorting out to clear that final hurdle though. I know I won't be playing anything else, but if I did it would be Infamous: Second Son, the PS Plus free game for this month.

Nicholas Leon, Staff Writer, nleon@gamingnexus.com
So I've actually made plans with a friend for a Smash tournament. It's funny, because I kind of suck at Smash. It's amazing how many strategies there are to each character in any situation. Also, why does Link suck in this game? I mean, he's the second-most recognizable figure in all of gaming, and he can't swing a sword well enough to save me from fight night humiliation!

Kevin O’Connell, Staff Writer, koconnell@gamingnexus.com
I just finished reviewing Project CARS 2 and it is quite an impressive game. Can't say it is first on my list to play from here, but still good nonetheless. Having a blast—literally—with Killing Floor 2 for the third week. I've been working with different character classes and will be trying the medic this week. I have also finished the regular cars in the Forza 6 career mode and am moving on to the race cars. Looking forward to LeMans at 220mph.