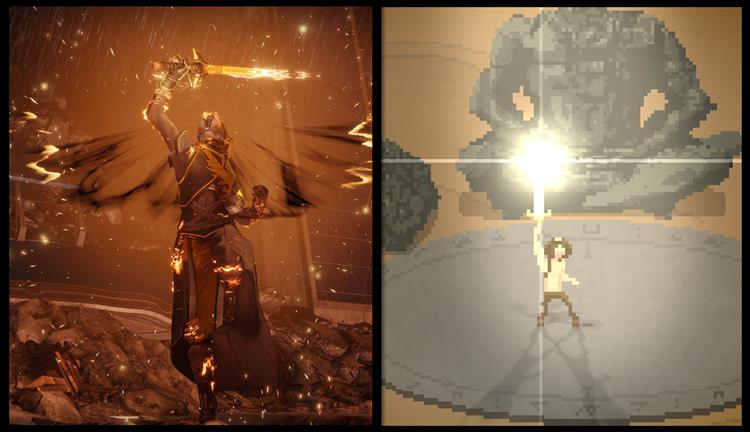 Kevin Durant of the Golden State Warriors manages, some days, to play "seven or eight hours" of Rory McIlroy PGA Tour. The Bethesda-built Game of Thrones page on Target was a hoax, but Turbine is making one of those tired Clash of Clans-like mobile strategy MMOs for GoT instead. And these arcade sofas look as uncomfortable as they are awesome.

Sean Colleli, Staff Writer, @scolleli
I'm wrapping up Metroid: Samus Returns for my rapidly approaching review. I'm also jacking into other people's minds in >Observer_, which theoretically is right up my alley but is also kind of freaking me out. If I can get my entertainment center reassembled after moving into the new apartment, I might also revisit the first two No More Heroes games. The announcement of Travis Strikes Again has me nostalgic for some good old fashioned Suda51 ultra-violence and insanity.

Dave Gamble, Staff Writer, dgamble@gamingnexus.com
I'm still in "if it ain't VR, it ain't worth playing" mode. I happened across Lucky Night: Texas Hold'em VR on Steam, available for the very reasonable price of...free. It's online poker with six human players and an AI dealer. I've gotten kind of used to everything being better in VR, but I didn't really expect that much of a difference in something as simple as a card game. I was wrong. There's just something about tossing in a hand as you fold against insurmountable odds and the feel of the chips as you toss them into the pot that makes it all feel so much more real. The fact that everyone at the table is wearing a VR headset and therefore has a mic and audio headset, combined with there being no language filters at all, makes for some mighty interesting conversation. Pair that with the available hand gestures and you get a free-for-all that would, in all likelihood, lead to knife fights in the real world. All hail consequence-free poker banter!

Even in VR you only get so much money per day, so I can't spend all of my time losing to someone that has a slightly better full house than mine. That's all the excuse I needed to get back into Elite Dangerous. I had heard that it is one of the more spectacular VR experiences, which it is, but having burned myself out on it back when I was grinding out an anything-but-lucrative career as a miner in lowly 2D, I was reluctant to go through the whole learning curve and getting HOTAS keys mapped and memorized again. So far it's still a lot of drudgery, but it's an awe-inspiring kind of drudgery. And even my pitiful skillz at asteroid mining fairly glow in comparison to my abilities at the poker table. So I've got that going for me.

Charles Husemann, Editor-in-Chief, @chusemann
Destiny 2 is the main game on my plate this week. I'm really anxious to see what Bungie has done beyond the first mission.  Mentally I've already mapped out the plot of the gang—get the gang back together, free The Traveler, and take out Ghaul—but I'm hoping that the writing team at Bungie has a few surprises along the way.

Outside of D2 I'm going to continue working my way through Superhot VR.  I love how the game makes it feel like you are playing The Matrix, but I hate having to replay the same segment over and over again. That said, 30 minutes of play is enough for me to break a good sweat, and that's not a bad thing.

Randy Kalista, Staff Writer, rkalista@gamingnexus.com
I'm all in on a few games. Starting with Sunless Sea. Sunless Skies, the sequel, just launched in Steam Early Access, but I figured I'd better check out the ocean-going original before taking to the clouds. Sunless Sea is a good time. It's a story-first game whose game mechanics are sometimes obscured by its need to be all writerly and stuff. But the tugboat pacing, the lurk of giant monsters beneath the water's surface, and the always-present option to eat your crew when you inevitably starve...well, these are the kinds of tough decisions I enjoy making as a captain.

Then there's Songbringer. It gives me that Hyper Light Drifter vibe, but it's also giving me a much harder time. Songbringer's procedural Zelda-like retro-pixel-wave yumminess isn't negatively affected by its difficulty spikes. It feels meant to play that way. I just need to learn to run when it's time to run. My sword can't solve every problem; nor does it have to, considering the fact that you can beat the game without grabbing your sword in the first place.

And hello, Destiny 2. I enjoyed our time at that one preview event up in Bellevue, Washington. I enjoyed our time in the open beta, both on PS4 and PC. I think we're ready now to settle in for the long haul. I'm glad you're finally giving me an excuse to re-up my PlayStation Plus.

Rob Larkin, Staff Writer, @Rob_GN
What am I playing? Destiny 2.

Nicholas Leon, Staff Writer, nleon@gamingnexus.com
I'm ramping up my playthrough of NieR Automata, and oh wow is it intriguing. I enjoy all the philosophical meditations that the android characters go through, and how the writing questions human nature in general. I've only just started Persona 5, but I think it'll turn out to be a very good anime (it is like literally an anime). Other than that, I've got a huge test this weekend that will decide whether I graduate college. Yay.

Kevin O’Connell, Staff Writer, koconnell@gamingnexus.com
I have been tearing up Killing Floor 2 well past my review of it. There is a lot to be said for jumping on the multiplayer server and whomping through a load of baddies. I've come across some really young kids playing, adding to the fact they shouldnt be playing a game this violent, but they were a pain in the neck to listen to and team with. Bought Bulletstorm's redo as well and can't wait to plow through that game. Ran the start of it and still wished the lip sync was better, but the action is supposed to be more seamless.