When I'm not thinking about Destiny 2, I'm often thinking about Kingdom Come: Deliverance. This is the medieval-realism RPG coming from newcomer Warhorse Studios.

The studio is fresh out of Gamescom 2017 in Cologne, Germany, where Kingdom Come picked up a "Best PC Game of the Gamescom" award. As a tiny celebration of that, they released some more screenshots of their gorgeous world, which is actually equal parts fantastic and mundane—but mundane in such good, good ways. I think 15th century realism is my new jam.

These screenshots depict an immensity not felt in games that shrink their worlds for gameplay purposes. And the scenery is drawn up with a workaday ethic that somehow lends more gravity to the lifelike damage of your weaponry and the lifelike fit of your armor. Sadly, the pics are small. I don't know why they did that. Must've been some kind of limitation having posted it as news on Steam, rather than on their own website. Still. Good-looking stuff.

There's a huge gatehouse to a castle or city with riders forming a caravan line down the road. There are holy men doing their scribe thing by candlelight under the arches of a church. Farmers work the land across the river from a major township. Some darkly-unlit building features parchment spread over tables, damaged book pages posted up like a badly organized job board, and other random odds and ends scattered about. There's some big game hunting going on, with your arrow knocked and a guy next to you with a Robin Hood hat packing a hunting spear. And there's some attackers, from the East, judging by their armor, that are super burning and pillaging the place, and aren't having any problems stabbing the unarmed citizenry of whatever town you're in. Brutal stuff.

Again, sorry the pics are small. But I can't pass up any opportunity to talk about this game. 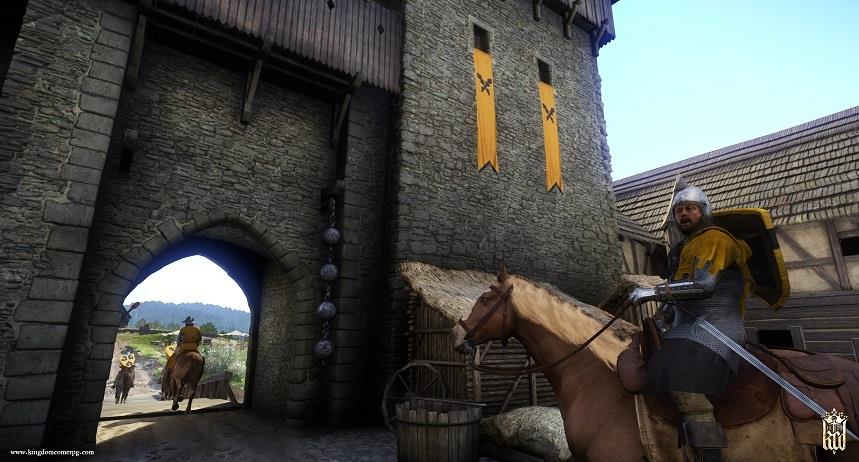