What we're playing: Call of Destiny 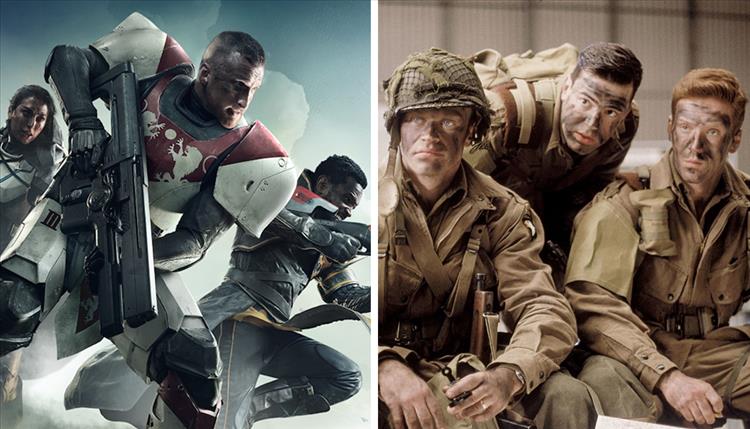 It's the calm before the Destiny 2 storm, as a few of us jump-glided into this week's PC beta—Bungie's first foray back into PC gaming in 13 years (see 2004's Halo 2). A mobile shooter developed in North Korea, called Hunting Yankee, lets North Koreans snipe American soldiers. And Marc Laidlaw, former writer at Valve, just posted what appears to be the concept of what could've become Half-Life 2: Episode Three.

I had to review it, so I have to play it. It's literally the best melee combat system I've ever played. I think it is at least worth playing for a few hours to experience the way a combat system could be if we thought of combat the way this team did. When I spoke with some of the guys who made it at E3, they said everyone on the animation team had at least five years of martial arts experience, and it shows spectacularly. I highly recommend it. I hope it blows everyone away and I'm not alone here.

I also finally beat Night in the Woods, another wonderful game. Adventure games like NITW are a great case for gaming as a storytelling medium. The game does so much quiet sociological storytelling, and can almost function as an encyclopedic novel without sacrificing coherency like those works typically do. Also the characters are lovely, a blast to hang with, and I cried more than once playing this game.

Sean Colleli, Staff Writer, @scolleli
I'll be playing Sean and Brandi Move the Heck Into a New Apartment with the Waiting for Internet Installation extended bonus DLC, so I'm not sure I'll have much time for anything else.

Actually, scratch that, I'll be starting my playthrough of Metroid: Samus Returns for my review. It's been far too long since we've had a decent Metroid game (the jaw-dropping AM2R fan game not withstanding), so hopefully Sakamoto-san got his groove back, and led MercurySteam to build a genuinely great new 2D Metroid.

Dave Gamble, Staff Writer, dgamble@gamingnexus.com
With three reviews in the hopper, I'm playing a lot, but not necessarily recreationally. Fortunately for me, all three games have merits that keep them interesting, albeit not always in the ways that I would seek out. The best example of that is Galaxy of Pen & Paper, a D&D type of RPG game, a genre that I managed to avoid experiencing back in the late '70s when that kind of thing was all the rage. In 1978, I was developing games on a 16k TRS-80 Model 1—even at that age I was more geek than nerd. Let's see...program my own games, or sit around the table rolling dice to learn my fate? Easy decision back then. Today, though, it's interesting to me in a sort of missed-nostalgia kind of way. That said, I still think I was on the right track in 1978.

The other two are VR games, and I have yet to encounter one of those that doesn't utterly fascinate me. On the pulse-pounding action side, I am getting myself and my 65' tall mech beaten into submission by the bad guys in Archangel, and playing Form, a fully immersive puzzle game that reminds be quite a lot of the iOS The Room games that kept me in thrall for hour after hour.

When I need to cleanse the mental palate and/or pine for some head-spinning vertigo, I press on with my long-term goal of relearning every car and track that I own in iRacing. The Oculus Rift was the final cog in the creation of an awesome racing rig—the Fanatec wheel and pedals got me most of the way, but the Rift is what ties it all together. In keeping with the Formula 1 schedule, this week was a mix of Spa and Monza in the Williams-Toyota FW31. Those fantastic traditional tracks and the non-hybrid, gas-burning Williams appeal to my sense of racing history.

Randy Kalista, Staff Writer, rkalista@gamingnexus.com
So, two things happened this past week. One, my wife looked over my shoulder and said, "I'm not getting a game on my phone. But if I did, it would be Design Home." And two, the very next day, she saw me putting together a Navy Blue Elegance furniture ensemble on my phone—while we were sitting in church—and she said, "You have a problem." I mean, she's not wrong.

I was tepid on Destiny 2. I liked OG Destiny, but not actually enough to buy into the expansions, which, I hear, improved the game significantly. Well, after previewing a couple dozen hours of Destiny 2 recently, I super got into this past week's PC open beta. I'd taken a Warlock through before. This time I tried out a Hunter. Not that there's a world of difference. But I might as well step out of my comfort zone, since I'll be making the switch from PS4 to PC when Destiny 2 launches early next month.

I'm also slipping in and out of XCOM 2. The War of the Chosen expansion is out this week, which I'm totally into, but I never got all that far into vanilla XCOM 2. It's a tough game. I just got tired of ramming my head against the wall in some matches that, even with randomized stages, kept ending in full team wipes, regardless of the tools, tactics, and troopers I used. It's one of the only games I "save scum" my way through, and it's one of the least-fun games to lose at, so we'll see how masochistic I end up feeling.

Rob Larkin, Staff Writer, @Rob_GN
Most of what I played last weekend was actually the Call of Duty: WWII beta, and I'll probably be back for more this weekend. The War mode was my favorite because I'm always a sucker for objective based PvP. I'm realizing with the baby in my life my days of platinuming games are probably over, but I've only got those three or four trophies hanging around on Fallout 4, so that's probably as good a swan song as I can hope for.

Otherwise, college football season kicks off, so I will be glued to the Florida/Michigan game, and it's time to kick my training into high gear for a 10k coming up in three weeks. I started training 14 or 15 weeks ago and the gains have been tremendous, but now it's time to close the last bit of distance and get up to a speed that won't embarrass me on race day.

Nicholas Leon, Staff Writer, nleon@gamingnexus.com
I'll be diving into Persona 5 and exploring more of NieR Automata. I think it's interesting how both of these games are sequels, yet are entirely new stories (I don't know much about Persona, but I've heard enough about it). Combine that with how their console competitor pushes out exclusives with well-tread ideas, and you gain a new appreciation for developers and publishers that try something different.

Kevin O’Connell, Staff Writer, koconnell@gamingnexus.com
I have had an interesting week of gaming. I have finished off Dungeon Defenders II and am glad for the experience. They need to make it a $14.99 game and not nickel and dime players for content. Having to pay for new characters (some of which are garbage) and new outfits and chests gets ridiculous after awhile. Played  Forza 6 getting ready for 7. I hope the career is better and the track list is more plentiful. Love playing 6 though—used it as rehab from my stroke. Bested Rocket League's PRO level this weekend with my son. Two-on-two was hectic but a blast.