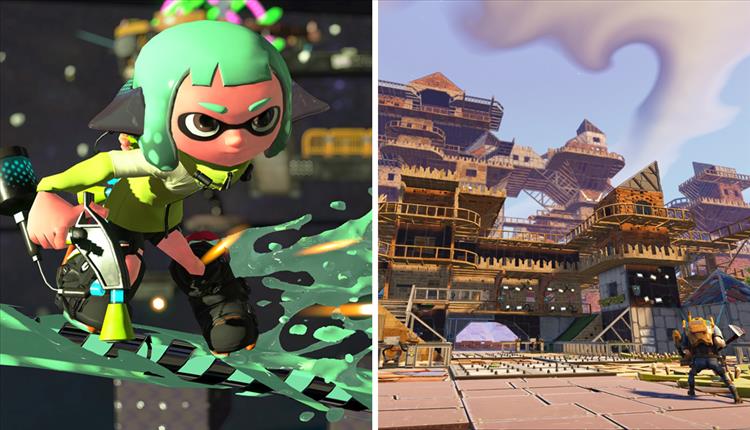 Walden is the anti-video game video game that wants us to slow down. Project: EVO could potentially help treat children with ADHD—as a prescription-based video game. And House Party has been pulled from Steam because, as Valve stated in a letter to the developer, "It does appear that your title is pornography."

Patrick Aloia, Staff Writer, @PatchesAloha
Hey y'all. I have been neck deep in some Wolfenstein: The New Order. I can't believe I didn't play this game until now. What an amazing game, what an amazing sense of tone, and the level design and the AI are all so in sync. It's an incredibly tense, weird game and I love it. Otherwise, still Breath of the Wild for me. It's the best game I've played this year not named PlayerUnknown's Battlegrounds. I can't get enough of BotW. Excited to try out Pyre. And I am hoping my budget will allow me to get Tacoma also, but I might have to wait for a bit.

Russell Archey, Staff Writer, @NeoScyther
I'm pretty much going to be swimming in classic gaming this weekend, as I have two games up for review: Namco Museum for the Nintendo Switch and Mega Man Legacy Collection 2 on Steam. While I've dabbled a bit in both so far, I've been plowing through MMLC2 trying to see what, if any, changes were made from the original collection, and what was left out. While I can't talk about anything specific to the collection yet—as the embargo doesn't lift for a few more days—I can safely say that Mega Man 7's third boss fight and Wily Capsule 7 still trouble me to this day. As for Namco Museum (which the embargo lifted last week), it's fun but the screen size when playing with the Switch on portable mode can be a bit of a hindrance.

Sean Colleli, Staff Writer, @scolleli
I'm finishing up my review for the puzzle party game Death Squared on Switch, so hopefully I can round up some friends tonight to play it with me and my fiance for some well-rounded multiplayer opinions. Other than that I'm replaying AM2R: Another Metroid 2 Remake because it's great and it will run on my laptop, as I wait for my motherboard to come back from the RMA gods.

Dan Colonna, Staff Writer, dcolonna@gamingnexus.com
I've been hit in the face with the bucket of ink formally known as Splatoon 2. After being completely useless in the original Splatoon, I'm excited for this second chance at squid glory. So far, so good. When I'm not bringing my Nintendo Switch wherever I can, I've been dabbling into Metal Gear Solid: Peacewalker on my PlayStation Vita. Although it's a bit of a relic when it comes to how it controls, Peacewalker has been an amazing little ride. This is the only gap left in my MGS history, and I'm happy to finally be working through it.

Kinsey Danzis, Staff Writer, kdanzis@gamingnexus.com
In between my reviews for Vostok Inc. and What Remains of Edith Finch (and the new job I've just started), I've succumbed to the siren song of The Elder Scrolls V: Skyrim once again. There's just something about Skyrim that keeps me coming back for more—and it's not Serana's constant freeze glitch, though I've been getting plenty of that anyway. I played hundreds of hours on Xbox 360, and getting it on Xbox One has just been an excuse to up my gamerscore. The music, graphics, and lovable glitches (minus Serana's) keep me relaxed and happy even when dragons are spawning everywhere I fast travel. I'm level 31 and still haven't tackled Odahviing; at this point, I'm just curious to see how far I can go before getting to Alduin. That's always been a prerequisite for the Miraak questline for me; I always want to have a leg up on him before I even touch Solstheim.

Dave Gamble, Staff Writer, dgamble@gamingnexus.com
I'm broadening my horizons by playing through The Legend of Heroes: Trails of Cold Steel which, being a Manga-style kind of thing, is a very big personal stretch. Manga seems to bring with it a sharp and brittle kind of anger that I have always shied away from. There is some of that in the game I'm playing, but there is also some fairly deep character building and good storytelling. And other than the criminally short skirts on the female characters, the Manga has dropped out of my consciousness as I have become mostly inured to it.

When I take a break from that form of work/play, it's still Project CARS, and I'm still trying to imagine what it's going to be like once I receive my back-ordered Rift. I hope I'm not building up my expectations too high... I would be seriously disappointed if the immersion factor doesn't live up to the hype. Plus, well, $399. Cheaper, but by no means cheap.

Randy Kalista, Staff Writer, rkalista@gamingnexus.com
I'm going to have to uninstall Design Home. I lost hours of sleep last week. All so I could, for instance, style a "Grand Woodsy Escape" log cabin living room with the perfect distressed furniture items. Do I go with the Heathcliff Blue 4 Door Tall Sideboard, or the Peninsula Home Barrocan Console? Either way, my this app gets my phone smoking hot after 15 minutes, with my low battery warning popping up even while it's plugged in recharging.

And I'm deep into Citadel: Forged With Fire territory. I thought it was construction-survival at first, but it's not. It's more sandbox role-playing game. Which, y'know, thank goodness. I just want to put on my Gandalf hat and build a nice wizard tower along some craggy lake overlook without having to worry about hunger and thirst and body temperature all the time. But Early Access is Early Access, and sometimes I can't even log in to my server, or if I log in to my server, it'll take five full minutes for my HQ to load. It happens. It's charming and magical, though, and I'm loving what I'm allowed to build.

Rob Larkin, Staff Writer, @Rob_GN
Last week I finally found some time to start gaming again. There is a golden hour or two after my kid goes to bed before the midnight-ish feeding I can claim. I used that time to finish off the last loose ends in Destiny, and this week I'll do the same for Fallout 4. Might even dip back into Destiny again as my clan seems pretty keen on the occasional Iron Banner get together for old times' sake.

Nicholas Leon, Staff Writer, nleon@gamingnexus.com
I'll try to finish Horizon: Zero Dawn this weekend. I've been pumping hours of gameplay into that title, and I think it's one of the best games I've ever played. It's at least in par with The Witcher 3. Other than that, I'll try to get past a couple levels I'm stuck on Zombie Night Terror.

Kevin O’Connell, Staff Writer, koconnell@gamingnexus.com
Well, Metal Gear Solid V was a bust, so I'm looking toward some other stuff.  I am reviewing Path of Exile's beta and so far it is pretty good. Seems to have a Diablo + Titan Quest vibe. My son and I are also diving headlong into Dungeon Defenders II. It has 100% more stuff than the first, but is the same type of gameplay and thus far is quite fun.