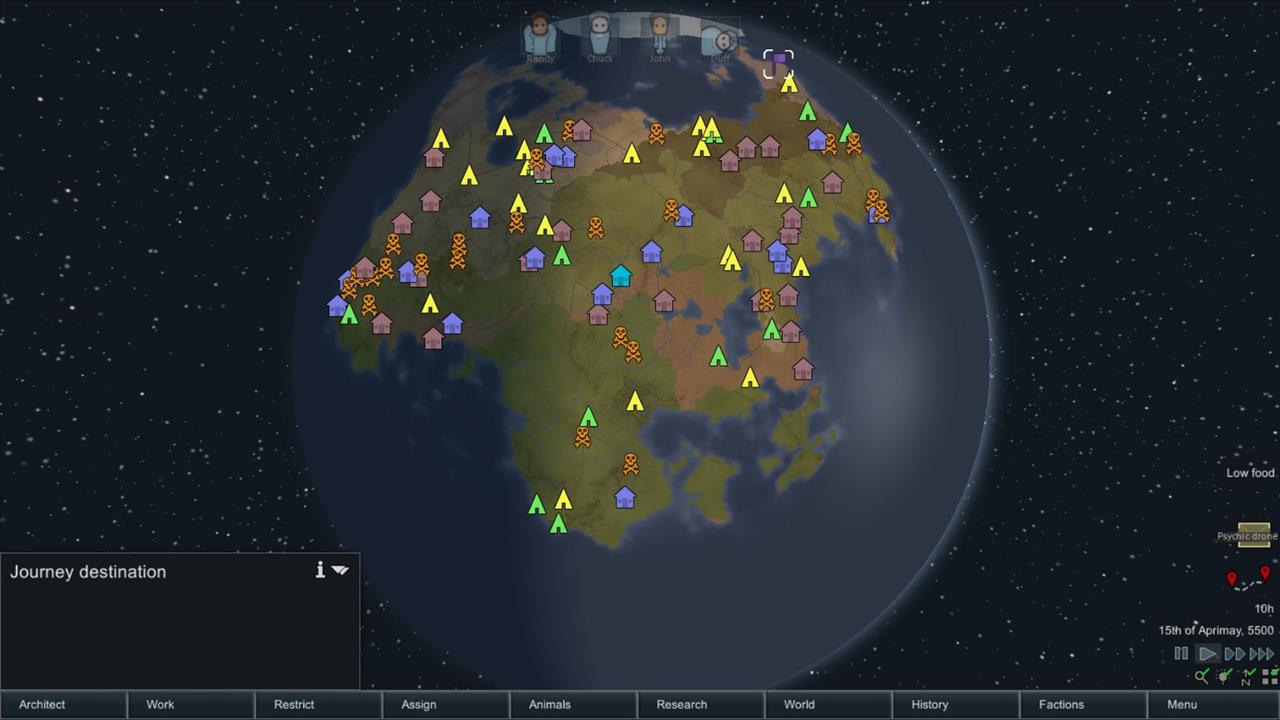 [This is the true story of three strangers picked to crash land on a planet and have their lives written about to find out what happens when colonists stop being polite and start getting real: The RimWorld.]

Randy the Luddite is abrasive and particularly interested in getting a chemical high. He grew up a medieval lordling, good at social manipulation but poor at doing anything that requires craftsmanship. When most people on his home planet joined an online hivemind, Randy went the other way, learning to build, fight, and mine within a technology-free rebel faction.

On the other hand, Chuck the Joywirer grew up a mushroom farmer in a cave but became a cutting-edge software developer. He’s a hard worker with a burning passion to mine, but he gets there slowly, possibly as a result of a painful bite scar on his head. Chuck isn't a lover or a fighter. He just wants to be left alone to extract mineral resources.

John the Counselor may become the glue of the group. He's an expert in cheering people up, loves animals, and is an intellectual night owl. Mentally, it'll be hard to ever break John—unless you try to get him to cook, because growing up as a sickly child in a hospital, and then having to overcome an eating disorder as an adult, makes him averse to working in a kitchen.

Our crash landed new arrivals scramble out of their escape pods. A shallow creek crosses a marble flagstone road in the middle of an oak forest. Low marble hills dot the landscape. An intact granite building stands nearby, practically ready for habitation. Randy starts building a roof over the remaining granite walls. John hauls some packaged survival meals inside. Chuck wanders toward a patch of rich soil, no doubt led by his green thumb. Survival has begun.

Randy’s the fighter. He wants to punch and shoot stuff. He grabs the bolt-action rifle. John has barely heard of these “gun” things, but he grabs a pistol. Chuck won't touch any of the weapons. He literally started vomiting when I asked him to grab the knife. He wandered away from his puke pile, since he also won't clean up any messes.

They're probably all gonna die.

Since everybody is so precious about their sleep time, they build three bedrooms first. Takes them forever.

A mad squirrel attacks John. John shoots the squirrel, but not before getting bite and claw marks across his torso, legs, and ear. He's in a medium amount of pain. Chuck has decent medicine skills, but he's just wandering around right now. John meditates before going to bed. I think it actually reduces his pain.

A malnourished bunny wanders into the building and sleeps at the foot of John’s bed. A warthog sleeps in Chuck’s room, which is fine, despite the fact that the warthog ate only 38 percent of a turtle and it’s rotting next to the house.

Sometimes Chuck, John, and Randy turn into clean freaks. John walks to the dump pile and sweeps up the rock rubble. Randy follows him and cleans up animal blood stains. Both ignore the raider corpse they threw out there. The raider’s name was Parker Free. She was a pessimist, had an annoying voice, and cut Randy up with a shiv, but our colonists were hoping to take her prisoner. Unfortunately, she bled out before they converted a nearby cave into a prison.

Later, they welcome Duff to the party. He crash landed only recently. Again, any resemblance to real Gaming Nexus editors is purely coincidental. We nurse Duff back to health and he joins the crew. Duff is a pyromaniac jogger (great), with construction skills you wouldn't believe, but a real passion for learning medicine. Though he'll inevitably try to burn this whole place down, he's incapable of violence. He doesn't have an artistic or intellectual bone in his body.

John tames a turkey that Randy shot the tail off earlier. The first potato crop was taking too long, and Duff had fallen into a malnourished state. Everybody was malnourished. But, on the verge of death, the potato crop comes through. Chuck drags himself out to the field to harvest the potatoes. John hauls them by the boxful to the kitchen. Randy whips up plates of fried potatoes, but we’re about to lose Duff, so Chuck forces Duff to eat raw potatoes, just to get something in Duff’s system. It sours Duff’s mood, but he eats them. Soon, everybody enjoys platters of the now life-saving fried potatoes.

Everybody gets along swimmingly. Pleasant conversations are had all around the table. These four crash-landed colonists, Chuck, John, Randy, and now Duff, just might survive this ordeal. Maybe...maybe they aren't all gonna die on this RimWorld.