The notification had gone straight to my spam folder, but Atari is back in the hardware business and making a new console. Astrophysicist Neil deGrasse Tyson is on Kickstarter with a scientifically accurate exploration game he's co-creating called Space Odyssey. And this landscape designer analyzed The Witcher 3, Mass Effect, and Dishonored.

Patrick Aloia, Staff Writer, @PatchesAloha
I'm playing more PlayerUnknown's Battlegrounds. I've had a busy week, so it's my perfect unwind game, still. Otherwise, I'm hacking away at Hollow Knight, which is nice, and some of it really nice, but I don't know if I'm completely sold on it yet. Might be a bit of Metroidvania/Souls clone fatigue, which I talk way too much about, but it's only because I gravitate so easily to those games. I'll also be using Strafe to unwind, since it's so sincerely dumb and mindless. I'm pouring more hours in that game than I care to admit.

Sean Colleli, Staff Writer, @scolleli
After the welcome reveal of Metroid: Samus Returns at E3, I'm replaying AM2R: Another Metroid 2 Remake. This is to thumb my nose at Nintendo a bit, but honestly more so I can refresh my memory. I have a lot of faith in MercurySteam and I'm incredibly excited to experience their reimagining of Metroid II come September. That said, AM2R is a revelation, and I'm not sure if anything can compare to the quality and attention to detail from a decade of fan dedication.

I've also picked up Saints Row 2 during the GOG summer sale. Now I remember why my friends and I referred to the Saints Row series as "GTA, but you know, fun."

Dan Colonna, Staff Writer, dcolonna@gamingnexus.com
I just wrapped up Blackwood Crossing on PlayStation 4. After finishing this game, I don't think I'll ever view narrative gaming the same way. Here was a heartfelt story wrapped in a clunky game. And yet, in spite of its shortcomings, this tale it told left a mark on me. If you're in the mood for some feels, pick it up.

As with most Nintendo Switch owners, I am now an ARMS combatant. Initially, I was playing this game with the Pro Controller—that is to say, the stationary method of gaming. Before too long, I decided to give the boxing motion controls a try. After about 10 minutes of waving my arms around like a goofball to no avail, I was waving my arms around like a goofball with some wins under my belt. This game is great fun, and the character design is out of this world. Nintendo is trying new things, and it is good.

Kinsey Danzis, Staff Writer, kdanzis@gamingnexus.com
Not much time for games this week between family travels and preparation for adopting a cat, but during my downtime I'm finally attacking Mirror's Edge Catalyst. I bought it ages ago during the Xbox Spring Sale, having held off on it initially due to complaints of monotony and disappointment, but I finally remembered it was sitting in my library and decided to crack it open. So far I think the open world aspect is a bit more repetitive than expected, but I'm enjoying the freedom that I couldn't get in the original Mirror's Edge. The graphics are such a huge improvement, though, and I honestly think it's a beautiful game to play.

Dave Gamble, Staff Writer, dgamble@gamingnexus.com
After a tense and lengthy trek (on foot, because I stupidly left my extension cord required to craft a Quad in my Bambi suit when I changed into something less orange) across a good chunk of Altis, only to get whacked within a quarter mile of my destination (and, insult to injury, I never knew what hit me), I decided I've had just about enough of the Arma 3 Exile mod.

Having reached my personal limit with one-shot deaths and the frustrations therewith, I'm heading back to Far Cry 4, where I know that I can survive a bit more abuse. I suppose it's a sign of my propensity to return to the well known that I already know I'm going to lapse right back into my Far Cry modus operandi, which is me making cowardly attacks on outposts from above with rifle-fired grenades being plunked from the relatively safe perch of the little gyrocopter. It's also a sign on my ineptitude that I have the process of respawning and getting myself quickly to a replacement chopper down to an art. Story line? What story line??

The U.S. Open has come and gone, so I only have another week or so of relaxing each evening with a round at The Golf Club, paired with a double of Glenlivet. And another on the back nine. By next week I will be fully into golf remission until the British Open in July. The Golf Club is the closest thing I've found to a reasonably priced golf simulator, and I'm enjoying it while I can. The Golf Club 2 releases next week, and I'm terrified that they're going to ruin it. If they make it any harder, I'm going to have to cut back on the scotch, and who wants to have to do that?

Charles Husemann, Editor-in-Chief, @chusemann
This weekend I'm going to dive back into The Division. Ubi invested a lot of resources into upgrading the game since it launched, and I'm thinking another trip into the Dark Zone is in order.  Right now I'm debating if I want to start a new character fresh or try to find the thread of where I left off last year. Time permitting, I might also see if I can get a few rounds of BattleTech backer beta in, and maybe pick something up off the Steam summer sale.

Randy Kalista, Staff Writer, rkalista@gamingnexus.com
The Steam summer sale started Thursday, so we'll see just how big of a dent it makes in my wishlist and my wallet by the July 5 end date. Six months in, however, and I've stuck to my New Year's Resolution: Buy One, Play One. Meaning, I don't buy a game—I don't care at what price—unless I'm going to play it right then and there. My console and PC library continues to slowly grow, but at least I can say that I've played every game I own.

That said, I've really got my eye on RimWorld. Partially because I'm reviewing the Psych Ward DLC for Prison Architect, and the two art styles are so similar that I had to dig to make sure the two games weren't from the same developer. They're not. But they both have squat Russian-nested-doll-looking characters, the view is so top-down that every building is only one story tall, and, for the most part, you only have tangential control of all the onscreen characters as they go about their Dwarf Fortress-styled lives. I just want something that's going to tell me a story right now, and RimWorld has so many quiet, meaningful variables that I just might get lost in its psychology/ecology/diplomacy/gunplay/interpersonal relationship blueprints.

Steam sale update: I added and played the medieval city builder Banished to my library on the first day, along with Dungeon of the Endless on the second day. Stay strong, Buy-1-Play-1 resolution. I'm $7.50 poorer, but two excellent games richer.

Rob Larkin, Staff Writer, @Rob_GN
I'm on a gaming-free weekend as a result of a lost bet with my wife two years ago and the chip she is now cashing in. I will however, be cleaning out my inbox and hope to get to inbox zero on my Gmail, have a truckload of catch-up to do on a MOOC course on machine learning I am taking, and will hopefully be starting my first real-life iOS app (schoolwork aside), if I can get around to first swapping out our laptops, because if I'm doing dev work it's going to be done on her year-old MacBook Pro, not my five-year-old MacBook Air. All of this is to be done sitting in front of an oscillating fan because we're having a bit of a heatwave in Britain and it is not comfortable.

Nicholas Leon, Staff Writer, nleon@gamingnexus.com
I'll be exploring more in Uncharted 4 this weekend. I've found that the gunplay in that game is quite energetic, if at least a little frustrating. It makes me curious, however, as to why the video game equivalent of Indiana Jones (Nathan Drake) is killing so many people. I mean, of course they're all bad guys trying to kill him, but shouldn't that have an effect on him? I understand that Naughty Dog was trying to go for a more mature tale with this supposed final outing, but the way the game tackles violence disturbs me.

But besides the unrealistic effect that violence has on Nathan Drake, I really like Uncharted 4's loading screen. There is simply a percentage point on the bottom left corner, and a spinning doubloon on the bottom right. It's very old school, which is why I like it. That and the fact that this is basically the closest thing to a Goonies video game adaptation we're ever going to get. 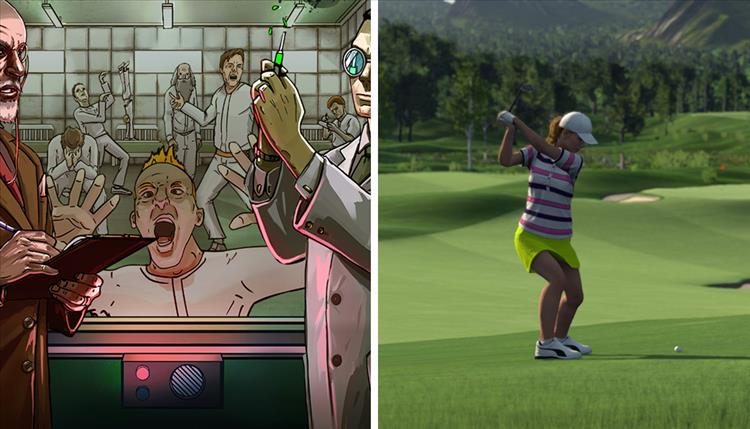