This past week saw a new Nintendo Direct for the upcoming game ARMS. All it took for me to be sold on the game was the first couple of glimpses back before the Switch was even launched, but now we know a bit more info about the game.

To start with, after choosing their character a player can then equip two different ARMS: one on the left and one on the right. These range from things such as standard fists to boomerangs to missiles and can provide offensive and defensive options. ARMS can also have different attributes of which there are seven: fire, electricity, wind, ice, stun, explosion, and blind. Weight is another important factor in determining performance as it affects momentum, so keep that in mind when selecting your ARMS. More powerful ARMS might be slower to compensate, much like faster ARMS might not deal as much damage. Finally, as you fight through the game you'll earn in-game currency that you can use at the ARMS Getter to use your skills to earn new ARMS as well as upgrade the ones you already own.

There are several Versus Mode options in ARMS such as traditional one-on-one fighting, two-on-two Team Battles, and even V-Ball, similar to volleyball only with an explosive ball. In multiplayer you can go through Grand Prix where you have to win ten straight matches to face a final opponent to be crowned ARMS champion, Party Match where you can join an online lobby and battle with up to three other ARMS players at a time in the lobby (one lobby can hold ten systems, but with two people per system you can have up to twenty players in a lobby), as well as Ranked Matches and Local Wireless Mode, the latter of which lets eight players, each with their own system, join an in-game lobby and battle similar to Party Mode.

In the future, Nintendo will release free updates to ARMS that contain new characters, stages, and ARMS. In addition, during the weekends of May 26th - May 28th and June 2nd - June 4th, Nintendo will offer an ARMS Global Testpunch, similar to the Splatoon and Splatoon 2 Global Testfires where players can check out the game beforehand. All you have to do to participate is download the Global Testpunch demo in the Switch's eShop before the trials begin.

One more thing of note, though not ARMS related, is that Nintendo has also released some info concerning Splatoon 2's Single Player mode in the form of the Squid Sister Stories. Head on over to the Splatoon website to check out what's going on with the Squid Sisters leading up to Splatoon 2.

Continue on to the official press release to learn more about ARMS features and characters. 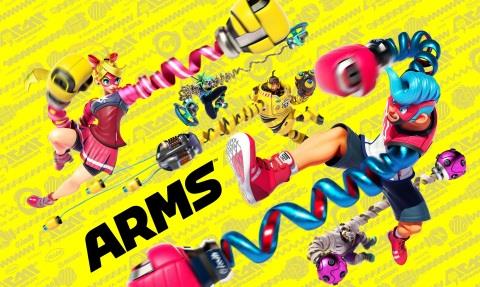 REDMOND, Wash.--(BUSINESS WIRE)-- Nintendo premiered a new Nintendo Direct video presentation all about its upcoming ARMS game for the Nintendo Switch console – with a little surprise from everyone’s favorite Inklings in the Splatoon 2 game as part of a bonus trailer at the end. ARMS was created by many of the same team members that developed the Mario Kart 8 Deluxe game for Nintendo Switch, promising the same level of polish and competitive action as the hit racing game. The Nintendo Direct video detailed many new features about ARMS, including key characters, attributes and the game’s numerous multiplayer battle modes, as well as information about a free Global Testpunch demo for the game that starts at the end of May.

The Nintendo Direct video detailed many new features about ARMS, including key characters, attributes and the game’s numerous multiplayer battle modes, as well as information about a free Global Testpunch demo for the game that starts at the end of May. (Graphic: Business Wire)

“With games like Mario Kart 8 Deluxe, ARMS and Splatoon 2, the next few months will be a summer of social competitive gaming on Nintendo Switch,” said Doug Bowser, Nintendo of America’s Senior Vice President of Sales and Marketing. “This Nintendo Direct presentation offered great reasons why ARMS is perfect for players of all ages, whether they are familiar with fighting games or not.”

To view the Nintendo Direct video in its entirety, visit http://www.nintendo.com/nintendo-direct. Some of the highlights revealed in the video include:

Remember that Nintendo Switch features parental controls that let adults manage the content their children can access. For more information about other features, visit http://www.nintendo.com/switch/.

*Additional accessories are required for multiplayer mode and are sold separately.