Ghost Recon: Wildlands 2nd DLC coming at the end of the month

The release date(s) has been set. For Season Pass owners, May 30th will see the release of the 2nd DLC expansion, Fallen Ghosts, for Ghost Recon: Wildlands. The rest of us will get a simultaneous release across platforms a week later, June 6th. The DLC introduces new bosses, missions, and challenges as well as a new enemy, Los Extranjeros - a paramilitary force backed by the government and meant to level the playing field by taking up the latest technological innovations into their arsenal. So this time it's not the Ghosts with the decided schematic advantage over their opponents. The DLC also bumps the level cap from 30 to 35, introduces the crossbow as a new weapon, and adds new skills for your Ghost to learn.

Ghost Recon: Wildlands Fallen Ghosts DLC will retail individually for $14.99 or as part of the Season Pass for $40. It will release for PS4, Xbox One and PC simultaneously. More info is available at the Ghost Recon blog. The full press release is below. 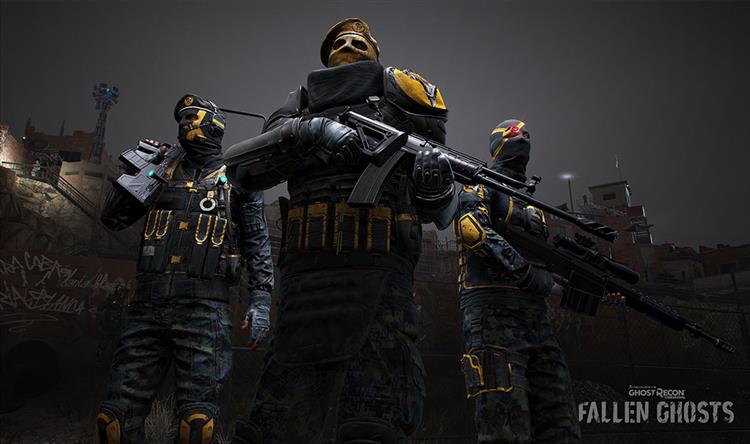 SAN FRANCISCO — May 15, 2017 — Today, Ubisoft® announced that the second Tom Clancy’s Ghost Recon Wildlands expansion, Fallen Ghosts, will be available to season pass owners simultaneously on Xbox One, PlayStation®4 computer entertainment system and Windows PC on May 30, 2017. The expansion will release for individual purchase for all players a week later, on June 6, 2017 for the suggested retail price of $14.99.

Fallen Ghosts takes place after the fall of the Santa Blanca Cartel. With Unidad’s military force unable to maintain control over Bolivia, the country is in a state of civil war. To help restore order, the Unidad enlists cartel members, veterans, mercenaries and criminals from various nearby countries as volunteers. Together, they form a new brutal special unit: Los Extranjeros, which is ordered to track and eliminate all American agents.

In this chaotic situation, the Ghosts have one last mission: evacuate the last CIA members and American civilians remaining in the country. Shot down en route to their mission, the Ghosts find themselves in the middle of the jungle, without external support, facing deadly enemies equipped with the latest gear and technology. These dangerous elite soldiers are separated into four distinct classes:

The Fallen Ghosts campaign will feature 15 new missions in which players will have to take down four new bosses located in three different regions. In the expansion, players will start with a new character at level 30 and equipped with all of the main game skills. The level cap will increase from 30 to 35, and players will be able to unlock nine new skills including physical, weapon and drones skills.

Finally, the more hardcore players will be pleased to know that the advanced and expert difficulties have been tweaked to offer an even higher challenge. By turning the HUD off players will get the most extreme and tactical experience possible in Ghost Recon Wildlands.

In Tom Clancy’s Ghost Recon Wildlands, players discover a fictionalized future Bolivia, a few years from now, in which players must take down the Santa Blanca drug cartel by any means necessary. Behind enemy lines, they hunt down targets and discover intel, using any of the more than 60 vehicles available, including cars, motorcycles and even helicopters that they can commandeer. To topple the cartel, players have to fight their way to El Sueño, Santa Blanca’s ruthless leader, by breaking down the Santa Blanca drug cartel’s operation piece by piece as they sever alliances between the drug lords and the corrupted government. A PvP mode for Tom Clancy’s Ghost Recon Wildlands will be available in the coming months.

To learn more about other Ubisoft games, please visit ubiblog.com.

Launched in 2001 with critical acclaim from fans of the Tom Clancy’s world, the Ghost Recon franchise has since convinced 30 million players thanks to breakthrough releases and has become the best-selling Tom Clancy’s brand on the last generation of consoles and PC. Tom Clancy’s Ghost Recon Wildlands is the best launch of any Ghost recon title. It brings the franchise to the next level with an episode designed from the ground up for a new generation, featuring a massive and visually stunning open world, playable for the first time solo or in online in four-player co-op from beginning to end.

Ubisoft is a leading creator, publisher and distributor of interactive entertainment and services, with a rich portfolio of world-renowned brands, including Assassin's Creed, Just Dance, Tom Clancy's video game series, Rayman, Far Cry and Watch Dogs. The teams throughout Ubisoft's worldwide network of studios and business offices are committed to delivering original and memorable gaming experiences across all popular platforms, including consoles, mobile phones, tablets and PCs. For the 2015–16 fiscal year Ubisoft generated sales of €1,394 million. To learn more, please visit www.ubisoftgroup.com.

“PlayStation” is a registered trademark of Sony Computer Entertainment Inc.