This week's Nintendo Download sees Minecraft continue its slow-burn conquest of every platform imaginable. The eminently successful building sim has just graced the Nintendo Switch, replete with the obligatory Mario texture pack. This means that you can take Minecraft anywhere, and not the janky mobile version either; this is full-on, feature complete Minecraft, anywhere you go, and that's pretty cool. This also means I can take my 3000m3 Minecraft Dyson's Sphere to parties, and bore people with it/reveal how much of a life I don't have.

Not to be outdone my Mojang, Nintendo has some goodies to sweeten the launch of Mario Kart 8 Deluxe, with My Nintendo Rewards including the customary calendar, wallpapers and a digital strategy guide for the game. I don't exactly have the scratch to buy Mario Kart 8, a game I already bought two years ago on Wii U, but at least it's something to play on Switch besides Zelda.

There are a couple more surprises this week, so check the press release for all the new deals and digital goodies. 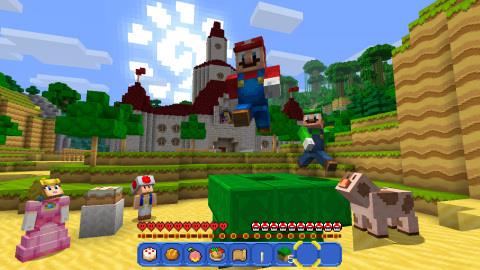