This week's Nintendo Download is a bit different in that there are no major Switch releases in the eShop to discuss...for this week anyway. Next week on May 9th we'll see the launch of NBA Playgrounds ($19.99) where players can take their "A" game to the playground to challenge the best in 2-on-2 basketball action while they collect their favorite players from a huge roster of both current and retired NBA players. The screenshot provided kind of reminds me of NBA Jam, and if the team behind that ever wants to bring it to the Switch I definitely wouldn't mind that.

Something you can check out on the Switch this week is a demo of Blaster Master Zero. If you remember Blaster Master way back on the NES, this is essentially a complete remake/remaster of the original game with new features, namely a map system which the original really needed to avoid getting lost in a few areas.  If you already have the full game, you'll be noticing some updates as the is getting updated to version 1.2. The update includes a new "hard mode" once you clear the game, as well as a new EX Character Mode which lets you play through the game as new DLC characters that will be available for purchase. The first new character is Gunvolt from Azure Striker Gunvolt. Gunvolt is currently available for free if downloaded by May 17th.  After that it'll be $1.99. On June 1st you can download Ekoro from the Mighty Gunvolt series and the same restrictions apply: free until June 14th and $1.99 after that.

Over on the Wii U we have Bonk's Revenge on the Virtual Console. Bonk's Revenge originally came out on the TurboGrafx-16 and is a sequel to the original Bonk's Adventure.  The game is a side-scrolling action game where you defeat enemies by bonking them with your head. Eating meat will double and triple your attack power. While I've never played Bonk's Revenge, I have played through Super Bonk on the Super NES and really enjoyed it, so if you're a fan of side-scrollers with a little quirkiness to them, this should be one to check out. 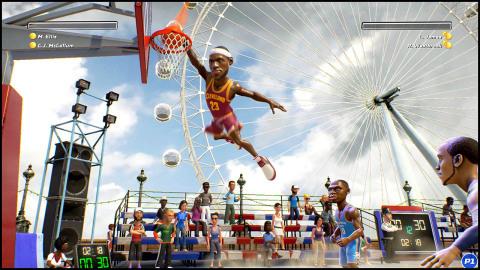 NBA Playgrounds will be available on May 9 in Nintendo eShop for the Nintendo Switch console. (Photo: Business Wire)