This week's Nintendo Download is off to the races, whether it's riding around in go karts or racing to survive topping out in puzzle games...okay, that's a bit of a stretch for an opener. It doesn't take anything away from this week's releases on the Nintendo Switch being pretty big.

First off we have Puyo Puyo Tetris released earlier this week. Once again we have two classic puzzle games released in a single game, this time with Puyo Puyo and Tetris. For those who have never heard of Puyo Puyo, some gamers might know it better as Kirby's Avalanche and Dr. Robotnik's Mean Bean Machine when it was released in the US for the Super NES and Sega Genesis/Game Gear respectively. You essentially drop colored blobs onto other colored blobs and joining four of them adjacently will clear them out. Anyway, Puyo Puyo Tetris allows players to play both games in both single player and multi-player, and you can even play a different game than your opponent.  A demo is currently up on the Switch's eShop to check out.

The other major release, or re-release in a way, this week is Mario Kart 8 Deluxe. This version of the game will have more characters, karts, and tracks unlocked from the start than any other Mario Kart game in the history of the series. Mario Kart 8 Deluxe will also include a revamped battle mode which I'm pretty eager to check out as Balloon Battle has always been my favorite battle mode in the series and while it was in the original Mario Kart 8, I prefer dedicated arenas to battles instead of the normal tracks found in 8. Granted the mode now uses a points-based system instead of Last Man Standing, but I can kind of forgive that. That just lets me play longer and have more fun popping my opponent's balloons with coincidentally well placed turtle shells. 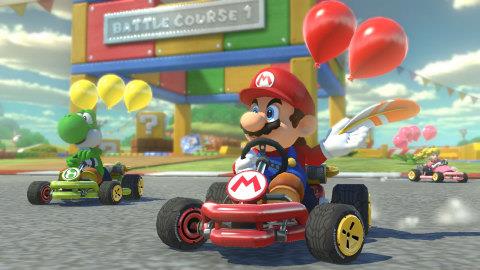 The Mario Kart 8 Deluxe game races to the Nintendo Switch console with more characters, karts and tracks unlocked from the start than any other game in Mario Kart history. (Photo: Business Wire)

Note to editors: Nintendo press materials are available at http://press.nintendo.com, a password-protected site. To obtain a login, please register on the site.