How might gamers react to the end of the world? "They talk more, they hang out more," says research gathered from one MMO beta. Jason "Aquaman" Momoa is on board for the upcoming movie adaptation of open world blow 'em up Just Cause. And Origin Access subscribers are starting their timers and already getting 10 hours of early access to Mass Effect: Andromeda.

Patrick Aloia, Staff Writer, paloia@gamingnexus.com
I'm finishing up Doom (2016) finally. What a wonderful game. The mechanics are so slick, and everything feels so right. More than that, not a single part of it feels out of place. No "ludonarrative dissonance" there—you are absolutely, 110 percent the Doom Slayer in every aspect of the game, and I could not feel more comfortable and satisfied. I'll also be diving into Oxenfree, which I started but didn't finish. I'll try to get some time in on either Inside, Gone Home, and Journey, to round out my "artsy indie game" education that started with Undertale and The Stanley Parable/Beginner's Guide.

Russell Archey, Staff Writer, @NeoScyther
I'll be spending most of the time exploring Hyrule in The Legend of Zelda: Breath of the Wild. So far I have one Divine Beast done, and for the second one I ended up picking the one that requires stealth to even get to the point where I can enter the beast. Needless to say, I suck at stealth. I'm hoping to be able to finish up Blaster Master Zero if time allows, since work will be taking up a lot of my time this weekend.

Sean Colleli, Staff Writer, @scolleli
I'm continuing my long, challenging trek through The Legend of Zelda: Breath of the Wild. Lots of enemies can one-hit kill you, the Master Sword kills you if you don't have enough heart containers, and I just learned that Link will have to dress in drag to continue on his quest. It's a much better game than I'm probably making it out to be. I'll also be heading back into 2Dark for my review. I hope the later levels are less frustrating and less trial-and-error than the preview build, because I really want to love this game.

Chapel Collins, Staff Writer, @ChapelCollins
I'm having a double dose of World War I this weekend, working on my Verdun review and getting acquainted with the Battlefield 1 DLC. Verdun has gotten off to a really, really (really) rough start on the Xbox One, with server issues abound and poorly optimized performance. I'm hoping they're working to fix it, but it's been so long since the PC version was released that I'm not too hopeful. Battlefield 1, on the other hand, is always reliably fun, and I'm really excited to see what the DLC has to offer.

Kinsey Danzis, Staff Writer, kdanzis@gamingnexus.com
I'm sharpening my assassin skills in Hitman this weekend—and by that, I mean learning them. Look at me, tardy to the party; I've restricted myself to the Showstopper mission for the past couple weeks (which may or may not be as long as I've had the game) because of reasons that I'm not quite sure of, now that I think about it. Practice? Bonding time with people who have conflicting schedules? The world may never know. I'll get to Episode 2: Sapienza eventually, but until then I'm going to strut the runway as a dashingly intimidating model as many times as I want. In between, I'll be planning elaborate schemes with syringes, coins, and perhaps a rubber duck here and there, but inevitably messing it up somewhere along the line and finishing the job as obviously as possible. I'm aiming to work myself up to "decent" before the next Elusive Target comes out, because my first ones were the doctors at Hokkaido and, well, let's just say that I didn't do too well even with a walkthrough and all the time in the world. Because, you know, Episode 1.

Charles Husemann, Editor-in-Chief, @chusemann
This weekend will be spent playing through the first 10 hours of Mass Effect: Andromeda (thanks, EA Access). I'm curious to see if the game lives up to the previous iterations of the franchise and to see if I can justify spending $60 on the game next week when I still have Horizon: Zero Dawn to finish. I'll also be spending a lot of quality time with Elite: Dangerous which has replaced MechWarrior Online as my current game obsession. I've spent over 130 hours with the game and I feel like I've just scratched the surface of what it has to offer. More than likely I will be running cargo missions most of the weekend as I continue to break in my Asp Explorer, but I may try the odd bounty or two if I work up some courage.

Randy Kalista, Staff Writer, @randykalista
I'm sitting here, white knuckled, looking for my defibrillator, waiting for Mass Effect: Andromeda. It's been five years since, well, since I never finished Mass Effect 3. Sorry about that. But you know how pre-launch hype tries selling you sight-unseen on a game? In my case, negative post-launch hype did the opposite. It turned me off from ever finishing the trilogy. (Look, Gaming Nexus has tried firing me, but I just keep showing up anyway.) So, until next week, it's recent leftovers for me. I've racked up 26 hours in Elite: Dangerous—not all of it flight time—but I think I'm finally getting the hang of this landing thing. Made my first half a million space bucks just shuffling interoffice envelopes around the galaxy for a day. I now have more than enough to purchase and fully fit a good and proper hauler, graduating me out of this Honda Civic of a starter ship.

Rob Larkin, Staff Writer, @Rob_GN
I've finally started a career mode in FIFA 17. It seems for the first few months, every time I would load the game up, I would find a new reason to be disappointed, from the return of milking micro transactions in FUT, to the lack of real depth in any nation outside England, to the very concept of the Journey mode, to not being able to scout New Zealand as a region when I made my first career mode attempt as the Wellington Phoenix. Yet here I am, finally going deep into a career and finally finding satisfaction with a flawed product. Oh FIFA, I just can't quit you. I'll also be finishing up my reviews for Ghost Recon: Wildlands and Styx: Shards of Darkness. I probably should have already written up the Wildlands one, I just really wanted to go deep in the game to see if things changed as the story nears the end. Spoiler alert: it doesn't. Does that mean a bad thing doesn't get good, or a good thing doesn't get better, or a great thing doesn't go downhill? You'll have to wait for the review for the answer.

Nicholas Leon, Staff Writer, nleon@gamingnexus.com
I've just gotten back into my new game plus playthrough of The Witcher 3. I started playing on the Death March difficulty, and lowered it to normal a few hours later. I love a challenge, but I realized that I would much rather have fun than get frustrated into the long hours of the night getting killed by wild dogs again and again. What can I say? I love myself a bit too much for that Death March mess. So hopefully I'll have this game beaten within the next few months (gotta take care of myself, now) and will finally get a chance to play that Hearts of Stone and Blood and Wine.

Matt Mirkovich, Staff Writer, @Stillmywords
I've been sick, and the perfect thing to do while sick in bed? Play Zelda: Breath of the Wild on the Switch. It's so mellow an experience at times that it's perfect for when I'm lucid. I've also got NieR: Automata waiting patiently, hoping to fill the gap after Zelda, before Persona 5 comes out. But then I've also got the Platinum trophy to get in Horizon: Zero Dawn, and a few indie titles I grabbed on the Switch, so I'm plenty full up on games during my downtime.

John Yan, Senior Hardware Editor, @TheJohnYan
This weekend I'll be spending time making deliveries in Elite: Dangerous as I just got a new ship. The Lakon Type 6 transporter will be my go-to ship unless some of my friends jump in for some bounty hunting. I have kept my previous ship in storage for that situation. I'll also be continuing building a nice solid mountain base in 7 Days to Die. Will it by the Mines of Moria? Or perhaps a vault that I shall name Vault 111? Who knows, but I'll be digging the side of the mountain to get in and setting up base camp. 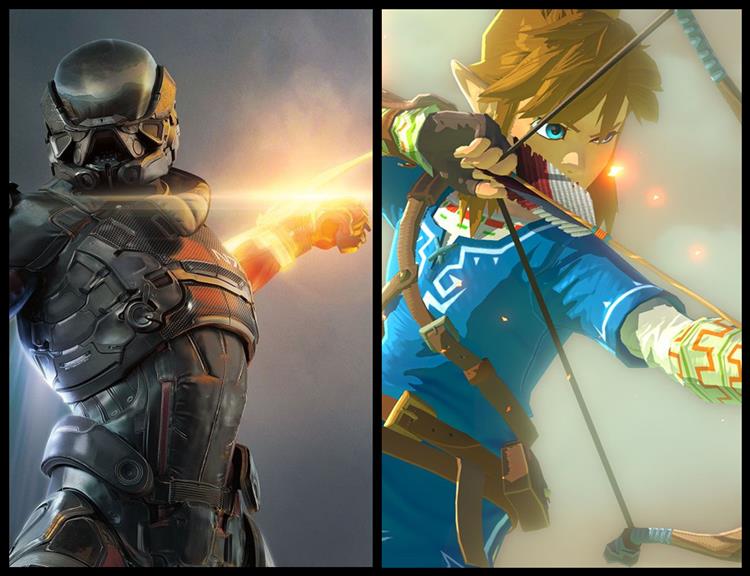