Nintendo Download for 3/9/2017: It's all about blasting and snipping

This week's Nintendo Download is all about snipping, blasting, and the Neo Geo...I'll get back to that one. First off though we have a demo for Snipperclips - Cut it out, together on the Nintendo Switch. If you haven't picked up Snipperclips yet and are kind of on the fence about it, this demo will give you a good indication of how the game plays. The demo has a few stages that are designed to teach you the controls and the different types of stages you'll find. While the game is probably a bit better with two players, you can play single player and it's still pretty good.

Next up is one that I'm personally looking forward to: Blaster Master Zero on the Nintendo Switch and 3DS eShops. While I've never actually beaten a Blaster Master game, I've enjoyed the series since the original way back on the NES and Blaster Master Zero looks like an enhanced remake of the original, similar to Ducktales Remastered. There are a lot of changes that I've seen in the video that you can check out on the eShop, but the areas you travel through looked to be designed after the original game. Between the new weapons, mechanics, and boss fights, this game can't come fast enough (the eShop hasn't updated on the Switch as of the time of this post).

If you enjoy Bomberman but haven't picked up Super Bomberman R for the Switch yet, you can always check out Bomberman 64 on the Wii U's Virtual Console. However, this version is a little different that the rest of the series. You're still using bombs to defeat your enemies, but aside from the game being in 3D, there's also an Adventure Mode with twenty-four stages of enemies to blast through. I've heard mixed reactions for this one but if you enjoyed it when it was on the N64, now you can enjoy it again on the Wii U.  If you have a few friends you can also play the game's multiplayer battle mode which mostly resembles how the original Bomberman titles played.

Finally, that little tidbit about the Neo Geo I mentioned earlier. While we don't have a Virtual Console yet, several ACA Neo Geo games are making their way to the Nintendo Switch.  These are games that are already on other systems such as the Xbox One, PS4, and Windows 10 PC and include Nam-1975, The King of Fighters '98, Waku Waku 7, Metal Slug 3, World Heroes Perfect, and Shock Troopers. If you're into the Neo Geo or are wanting to check out a few games for it for the first time, these are a few good ones to get you started.

For more info as well as this week's sales, continue on to the official press release. 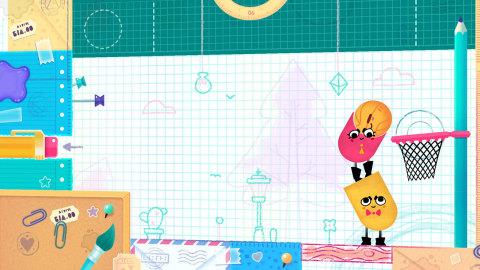 Nintendo Download, March 9, 2017: A Week of Snipping and Blasting

In this action-puzzle game, paper pals Snip and Clip must cut each other up to overcome tricky obstacles... or just to laugh their heads off (sometimes literally). (Photo: Business Wire)