Microsoft gets on the game subscription train with Xbox Game Pass

Microsoft keeps improving on their offerings for the Xbox One and today they announced the Xbox Game Pass. For $9.99 a month, you'll get access to over 100 Xbox 360 and Xbox One games to play as much as you want as long as you keep paying the monthly fee.

The Xbox 360 games are limited to the ones that are on their backwards compatibility list and there are some good Xbox One games mentioned that will be available.

Compared to Sony's PlayStation Now offering, there are some differences that Microsoft console owners will enjoy. For starters, these are full install games, not streamed so if you have bad Internet connections, you'll be fine after it's all downloaded and installed. Even if you have a good Internet connection, things can happen so being able to have the games locally is a nice plus.

Sony doesn't offer any PlayStation 4 games with PlayStation Now, but the Xbox Game Pass will let you play Xbox One games. Halo 5 was specifically mentioned as one of them.

The games on Xbox Game Pass can change from month to month so if you really enjoy something, it might not be there later on. You will get a chance to purchase the game at a discount though, should you want to keep it.

Xbox Game Pass is scheduled to be launched later this Spring with select few being able to test it out today. 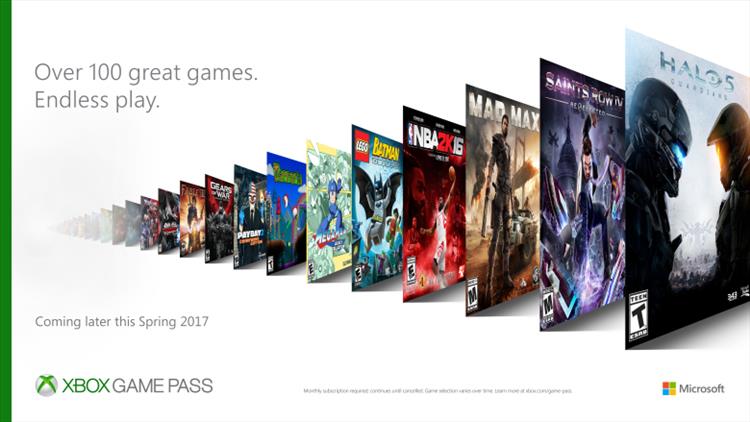