It's not unusual for Nintendo to pull off strange publicity stunts, like turning Times Square into a Wii Sports resort park or dressing all their E3 booth staff in cat ears and instructing them to meow at attendees.

The "Switch and Play" tour is no different, with Nintendo setting up isolated living room-esque spaces in semi-remote locations to demo the Nintendo Switch. The first one is invite only and takes place at the Blue Cloud Movie Ranch in Santa Clarita, CA on February 23rd. To make things even more exciting (and weird?), none other than John Cena will be on hand for that stop.

The other two stops are in Snowmass Village, CO and Flatiron Plaza in New York. I get that Nintendo is pushing the whole "play anywhere" angle by holding these events at strange locations, but it just seems inconvenient to me. Nintendo still has an uphill battle to convince people that the frankly overpriced Switch, it's obnoxiously expensive accessories and thin launch lineup are worth the investment.

In my opinion, single-day publicity stunts will just further confuse consumers. Hold week-long hands on demos at Best Buys across the country and you're likely to get a much better response. Check the press release after the jump for more details if you plan on attending either of the open events. 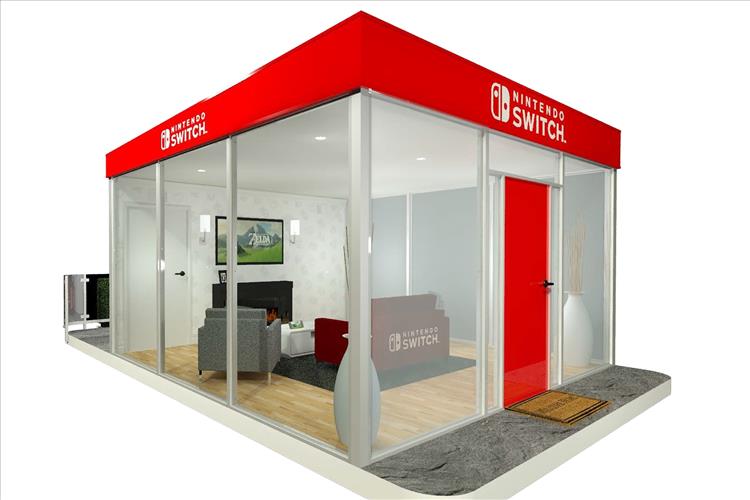 Switch and Play with Nintendo Switch in Unexpected Places across the U.S.

REDMOND, Wash.--(BUSINESS WIRE)-- Imagine driving in the middle of the desert and seeing a couch, TV and video game system in the middle of nowhere, or skiing down the side of a mountain and seeing another one of these surprising setups sitting there in the snow, ready for a round of gaming. It’s a striking visual, sure, but it drives home the message of Nintendo Switch, Nintendo’s revolutionary new video game system that launches on March 3. Nintendo Switch is a home gaming system with the portability of a handheld. The system lets you take home video game experiences anywhere you go, offering you the freedom to play where, when and how you like.

To showcase this unprecedented new style of console gaming on the go, Nintendo is showcasing the versatility of Nintendo Switch across the country with highly visual, interactive living room-inspired spaces in places you would never expect, bringing surprises to every stop. (Photo: Business Wire)

To showcase this unprecedented new style of console gaming on the go, Nintendo is showcasing the versatility of Nintendo Switch across the country with highly visual, interactive living room-inspired spaces in places you would never expect, bringing surprises to every stop. The first Nintendo Switch experience will pop up in the desert at Blue Cloud Movie Ranch on Feb. 23. Invited guests will get the chance to enter the interactive space and experience different Nintendo Switch games, as well as delight in the novelty of playing these games in a completely unexpected locale.

To make the first stop even more exciting, John Cena will be the special guest at this location. As a WWE Superstar and actor who is as versatile as the Nintendo Switch console itself, the performer (and Nintendo fan) Cena is the perfect person to kick off this unique tour. Known for his charisma and family-friendly appeal, John Cena will showcase the face-to-face off-TV functionality of 1-2-Switch, a Nintendo Switch launch game that features hilarious activities like milking a cow and participating in a Wild West duel. Cena will play the game with invited fans and YouTube influencers, highlighting how fun it is to play 1-2-Switch using the innovative new Joy-Con controllers.

The second Nintendo Switch experience will pop up in Aspen, Colorado, on Feb. 27 at the popular Snowmass ski resort. Again, the unexpected location highlights that Nintendo Switch games can be played anywhere – even somewhere as remote as the side of a snowy mountain!

The final stop on the Nintendo Switch journey will be in Madison Square Park in New York on launch day, March 3. Surrounded by excited fans and curious onlookers, the event will kick off a new era in Nintendo gaming. Two famous (and super) brothers named Mario and Luigi will also attend the final event to celebrate launch day.

“The upcoming launch of the unique Nintendo Switch console calls for a unique series of celebrations,” said Doug Bowser, Nintendo of America’s Senior Vice President of Sales and Marketing. “These unexpected locations perfectly highlight the features of the new system, as well as provide one-of-a-kind surprise-and-delight moments that Nintendo does best.”

Each of these Nintendo Switch experiences will be an absolute spectacle, featuring visuals that remind people of home gaming, but set in wildly unexpected places. Seeing these familiar settings set against dazzling backdrops like the open desert, snowy mountains and bustling city will drive home how Nintendo Switch transforms any space into a place to play.

The specific times and locations for each event are as follows:

At home, Nintendo Switch rests in the Nintendo Switch dock that connects the system to the TV and lets you play with family and friends in the comfort of your living room. By simply lifting Nintendo Switch from the dock, the system will instantly transition to handheld mode, and the same great gaming experience that was being enjoyed at home now travels with you. The portability of Nintendo Switch is enhanced by its bright high-definition display. It brings the full home gaming system experience with you to the desert, on a snowy mountain or even during a busy city commute.

About Nintendo: The worldwide pioneer in the creation of interactive entertainment, Nintendo Co., Ltd., of Kyoto, Japan, manufactures and markets hardware and software for its Wii U™ and Wii™ home consoles, and Nintendo 3DS™and Nintendo DS™ families of portable systems. Since 1983, when it launched the Nintendo Entertainment System™, Nintendo has sold more than 4.4 billion video games and more than 696 million hardware units globally, including the current-generation Wii U, Nintendo 3DS and Nintendo 3DS XL, as well as the Game Boy™, Game Boy Advance, Nintendo DS, Nintendo DSi™ and Nintendo DSi XL™, Super NES™, Nintendo 64™, Nintendo GameCube™ and Wii systems. It has also created industry icons that have become well-known, household names such as Mario™, Donkey Kong™, Metroid™, Zelda™ and Pokémon™. A wholly owned subsidiary, Nintendo of America Inc., based in Redmond, Wash., serves as headquarters for Nintendo’s operations in the Western Hemisphere. For more information about Nintendo, please visit the company’s website at http://www.nintendo.com.