A lucky gamer got Bill Gates as his Secret Santa, and was loaded up with video game goodies

Reddit user Aerrix participated in the website's Secret Santa activity, which occurs every year, and this time he hit the jackpot: Bill Gates.

This is not the first time Mr. Gates has participated in Reddit's Secret Santa, but according to Aerrix, it is the first time that his target has been a gamer. And boy, did Bill go the extra mile.

In this image gallery, you can see the amazing stuff that Bill sent Aerrix. He got an Xbox One, several controllers and games, and months of subscriptions to Xbox Live. But even better, he got tons of other, non-Microsoft goodies as well, which just goes to show that it wasn't a Microsoft plug on Bill's part, but a genuine show of holiday spirit for another person with similar interests.

In other news, participation in next year's Secret Santa is predicted to skyrocket. 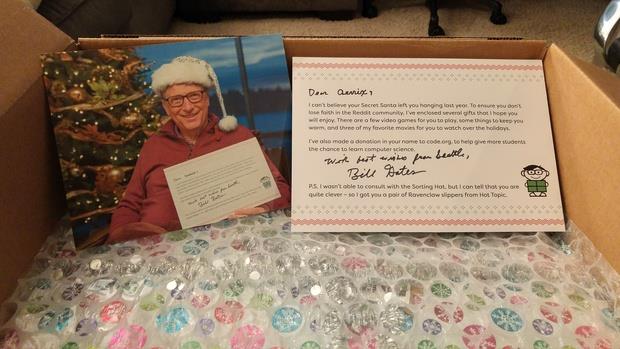