The University of California–Irvine will pay for half your college tuition but, oh bummer, you have to play video games to get the scholarship. Time Magazine took a stab at making a Top 50 Video Games of All Time list last month; it might be the first one of these you've seen that puts Half-Life 2 at #17, and where Pong rubs elbows with Castlevania and ESPN NFL 2K5. And while the United States might have new Star Trek and Wonder Woman stamps, Poland has a stamp of The Witcher.

Russell Archey, Staff Writer, @NeoScyther
I'm closing in on finishing up Ys VI: The Ark of Napishtim. I'm about halfway through the final dungeon and have taken care of most of the optional stuff outside of the three optional boss re-fights. Beyond that, it's just grinding my way up a few more levels to prepare for the final boss. I'll also be starting up Boulder Dash 30th Anniversary in preparation for my review. It's been far too long since I've fired up a Boulder Dash game, so I'm really looking forward to this one.

Sean Cahill, Staff Writer, @seancahill24
This weekend I will be playing the game called "Flying to Chicago" where I'll be spending the weekend with family and taking in a Chicago Cubs game. This means busting out the handheld systems, so I look forward to diving into Bravely Second for the first time.

Sean Colleli, Staff Writer, @scolleli
After completing BioShock Remastered, I'm moving on to the second game in the Collection, BioShock 2. Charles scored the original version a 9.5, and I still maintain that BioShock 2 is the best game in the series. It lacks the initial first-impression punch of the original, but it also lacks the freshman clunkiness, its insecurity-driven need to be about something, and thus the bluntness of its story. Instead, BioShock 2 is a more subtle, more elegant, and more human evolution of both the story and gameplay that made the original so good, and thus the sequel is even better. Its DLC chapter, Minerva's Den, is also a beautifully poignant bookend for the whole series. BioShock 2 was unfairly maligned as a shameless cash grab when it was released in 2010. It is anything but. Now that it has been re-released in the remastered BioShock: The Collection, I encourage anyone who missed it the first time to give it a chance. I'm betting you will be pleasantly surprised.

Randy Kalista, Staff Writer, @randykalista
I'm falling in love with Mad Max. I'm only half a dozen hours in, so I don't know what the longview looks like. But I dig the gameplay loop so far: bolt stuff onto car, smash War Boys, find Guzzolene, drink water, burn rubber. It's a simple life, but I'm a simple guy. Then, just to drive the breakdown of societal norms into the ground, I got This War of Mine on mobile. Seeing the civilian side of the Siege of Sarajevo in Bosnia should make for a sobering weekend. I'm great at parties. Also, yes, I'm that dude downloading the free Dear Esther: Landmark Edition dynamic theme to my PS4. Long live the walking simulator. I reviewed the game. It's still fantastic. A fantastic 9 out of 10.

Aidan Kelly, Staff Writer, akelly@gamingnexus.com
This weekend I'll be working on getting my Dark Souls III Bloodshades character up to the SL140 meta. I'm certainly not a good PVP fighter but shenanigans are to be had and I'm all for that. Destiny: Rise of Iron looks great and I'm excited to see how the new raid mechanics are going to work. Other than being a skeleton and drooling over the new Destiny armors, I'll be involved in some Battlefield 4 bouts in anticipation for Battlefield 1. The delayed  GTA V graphics overhaul came out this week and I'll be looking forward to seeing the awesome work done by the modding team.

Rob Larkin, Staff Writer, @Rob_GN
Whole lotta Destiny this weekend. Played the first mission of the new expansion, Rise of Iron, while on my lunch break the day it came out. I'll be exploring all that's on offer for the vast majority of my time, and gearing up with my clan to have a go at the new raid on Sunday. While waiting for the release, I did get back into Assassins Creed IV: Black Flag last week and if anything is going to pull me away from Destiny, it might be that for a few minutes a day, but not much more.

Matt Mirkovich, Staff Writer, @Stillmywords
For me, it's all about Shin Megami Tensei IV: Apocalypse. I'm also trying to work on a backlog that only grows more and more insurmountable by the week. I haven't finished Deus Ex yet, BioShock has my attention again thanks to the HD remasters, and I'm even looking at Skyrim again now that my PC has the power to create small universes with ease. And then there's always something that Final Fantasy XIV needs from me, now I feel like leveling another tank class since Paladin has fallen way out of favor, and patch 3.4 drops next week with a massive wealth of content. Don't cry for me, I'm already dead. 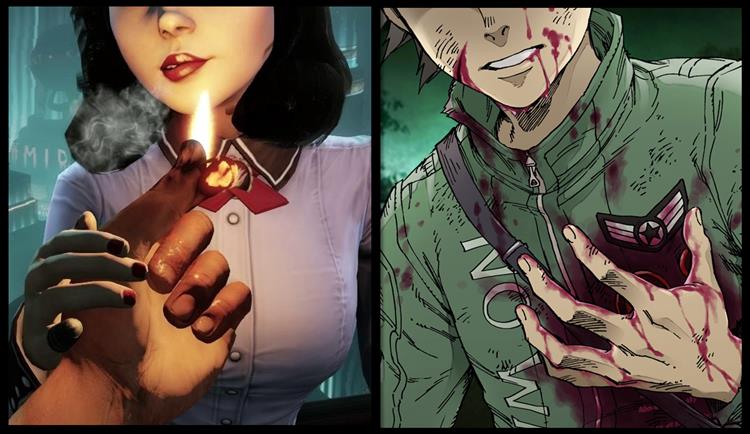