PlayStation VR launches in one month, and it comes with 18 demos on a disc, from EVE: Valkyrie to Job Simulator to PlayStation VR Worlds (that last one adds five VR experiences in and of itself). The Last Guardian pushes its launch date back from October 25 to December 6 so Fumito Ueda can squash more bugs. And the Warcraft: Lord of the Clans adventure game—the one Blizzard canceled in 2009—leaked, in full, online.

Since RIVE was released this week, a good chunk of my time this weekend will be spent playing through that for my review. It's pretty fun for the most part, except there's a particular enemy that's incredibly annoying. They're these little blue orbs/bombs/whatever-they're-supposed-to-be that appear in packs and explode when they hit you. The problem is they move very quickly and give you little time to take them out and they've been in every stage I've played so far. So it's almost like I've hit a brick wall...that explodes. Outside of that, I've also been getting back into Ys VI: The Ark of Napishtim as I'm getting close to the end, but I have a feeling that means there's a huge grind session coming up...which is pretty much a good portion of the game at times it seems.

I'll be jumping into Seraph and Halcyon 6 for my upcoming reviews. I'm particularly intrigued by Halcyon 6. Its promise of a deep sci-fi RPG with tense strategy and rewarding exploration seem like the perfect antidote for the infinitely bland homogeneity of No Man's Sky, and how I've felt like a jilted bride at the altar ever since Mass Effect 3 dropped me off a narrative cliff.

I'll also be heading back to Rapture to explore BioShock: The Collection. Being a curmudgeonly old fan of the System Shock series, I have something of a love-hate relationship with BioShock, but I can't deny the quality of the games and I'm eager to replay them in HD.

This weekend I will most likely be spending most of my time on Bespin, playing the Battlefront DLC while it's free because I'm either too principled or too cheap to buy it; I prefer to think it is the former but it almost certainly isn't.

I am dubbing this a "Return to Rapture" weekend, as I attempt to go through all three BioShock games in the next seven days. It will be a task, that's for sure, but I am up to it. I love the series. This will be my first time playing through Infinite, so I am looking forward to exploring the skies of Columbia. Plus, Pac-Man Championship Edition 2 is here, and considering my addiction to the previous CE games, one is very likely to develop here as well.

I'm going to spend some time with Space Pirate Trainer this weekend, as it received a major overhaul this week and it feels almost like a new game. In addition to some new weapons and enemies, the new power-ups add a lot, too.

I'll also be wrapping up ReCore, which is not nearly as good as I was hoping. I'm only a few hours in but it's not nearly as cohesive as I would like it to be. Any free time after that will be divvied up between Everspace and MechWarrior Online.

I'm all over the place for gaming right now. If I get to do even two of these, I'll be happy.

First and foremost is my review of Fallout 4: Nuka-World. It's a combat-heavy piece of DLC. Things are real straightforward for the raiders clamoring over this beat 'em up theme park: raiders want action and they want caps. They're simple folk. There's something to like and dislike about each one of the factions, which I appreciate. Fallout 4 ensures that no one gets to claim the moral high ground—especially since we're talking about the lesser of three evils here in raider land.

My GOG library, multiplied by my Dad's birthday this week (he may be turning 60, who knows), has me eyeing a reinstall of Sid Meier's Alpha Centauri. My Dad and I got to zap a lot of mindworms together, sometime between my high school and college years. Moving around a checkerboard map to colonize a red planet again sounds great.

I've listened to a few tabletop role-playing podcasts over the years, and none of them comes close to the level of drama and theater captured by The Unmarked. It's a game run by one Rob Daviau for the folks at the Gamers With Jobs podcast. It's much closer to a radio play than a regular ol' d20 D&D session. But it's inadvertantly got me interested in something I'd picked up in a Humble Bundle awhile ago: Sorcery! Parts 1 and 2. It's all hand-drawn maps, pewter characters and dice for days. Can't believe I forgot I've had this one waiting in the wings.

And maybe Mad Max on PS4 has arrived from Amazon by now. Saw a video this week about all the special effects used in the filming of Mad Max and—guess what—there aren't any. I think they propped up a green screen once or twice to hide a bit of scenery. But that movie is a masterwork of stuntmen getting paid to do straight up Evel Knieval work. I'm not worried about the video game's middling Metacritic score. I keep seeking out streams of that game, and I can't take my eyes off 'em.

This weekend is all about basketball, as I'll be playing and reviewing NBA 2K17. I'm more excited about this year's version as I'll be hearing NBA World Champions Cleveland Cavaliers a lot. I'll also be stepping into some VR games with a turn at Out of Ammo and probably Pool Nation VR. 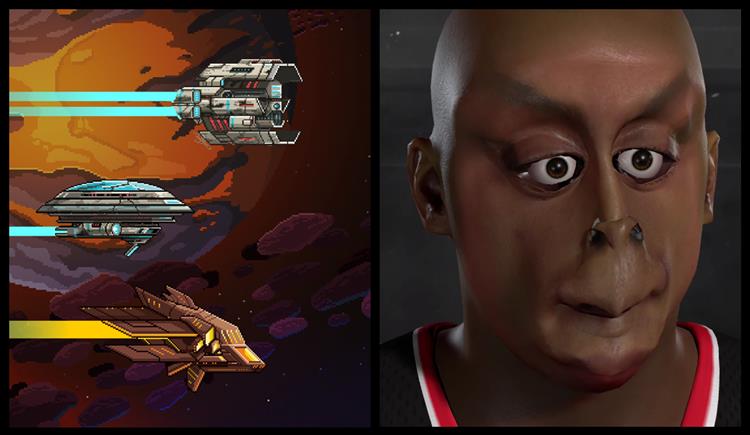