What we're playing this weekend: Inside Divided Edition

Eurogamer visited the person that bought the leaked PS4 Slim on eBay, booting up the console, and confirmed that the PS4 Slim is a real thing. Abduzeedo chats with Andrew Kim, innovative minimalist designer, about designing the Xbox One S. And Star Citizen showed some off-the-rails interplanetary gameplay at Gamescom 2016 in Cologne, Germany.

I'll be spending most of the weekend checking out Axiom Verge on the Wii U for my upcoming review. I've already played through the game on Steam and thoroughly enjoyed it, so I'm really anticipating what the developers have done with the Wii U tablet in terms of game functionality. I'm really hoping for a map system; while the game does have one, having to go into a separate screen to view the full map was starting to get a little tiring when I kept forgetting where I needed to go. Having a map on the tablet controller would be a huge plus. I'll also continue my trek through WWE 2K16's career mode (shameless plug for YouTube videos) as I'm about to start January 2017 Week 1, have been NXT Champion since September 2016 Week 1, and have only had to defend my title once. At this rate, I'll be a Hall of Famer before I even get out of NXT.

After a dozen hours with little to show for it, I'm officially giving up on No Man's Sky. It's a cool premise, but the meaningless, sucking tedium far outweighs any lofty potential. Hopefully Randy will let me know when Hello Games puts an actual game on the rickety skeleton. But for now, GOG refund, here I come. Instead I'll probably pull the trigger on Deus Ex: Mankind Divided. It's been getting rave reviews and I've been itching to dive back into some cyberpunk-noir.

This weekend I'm going to be checking out Kittypocalypse, a VR tower defense game where you have to defend a base against waves of cats of varying levels of armor. The VR part is very cool so far, as you have nearly unlimited ways to view the action and interact with the battlefield.

I'll also be diving into the second week of the Titanfall 2 technical test. I enjoyed what I played last week and I'm interested to see if all of the tweaks that Respawn has made from last week's data improves the gameplay like they hope it will.

After that, any remaining time will be spent playing MechWarrior Online so that I test out the SteelSeries Rival 700 mouse and Apex M500 keyboard that I'm reviewing.

No Man's Sky wanted to seat me in a starship, but it's more like it strapped me into a roller coaster. My first dozen hours were like entering the atmosphere, my eyes wide and nervous, my ship (and my impressions) burning up on entry, wondering if this rattling cage would hold itself together. But the second dozen hours have relaxed. My opinion has leveled out. I'm coasting now. I finally see No Man's Sky for what it really is: Not the infinitely huge game it would have you believe, but an infinitesimally small game writ large.

I'm also watching my six-year-old play through Bound for the second time. She loves the dancing movements more than anything, but she hands me the controller during the darkly lit interludes (even though the interludes are just scenes reassembling from polygonal shards of glass). It's the darker nature and hints of emotional family abuse that make her not want to walk through those scenes. My kiddo loves her dad. But I've still felt a bit of parental guidance is required with this one. And she gets it. But I've found myself looking at those scenes of a father yelling at a mother, then me turning to my own child and saying something like, "Not all dads. Not all dads are like this."

This just in: Got review code for Inside. You can have your PTs and your Allison Roads and your Resident Evil 7 demos. For my money, Inside is the most survival-horror game out there. 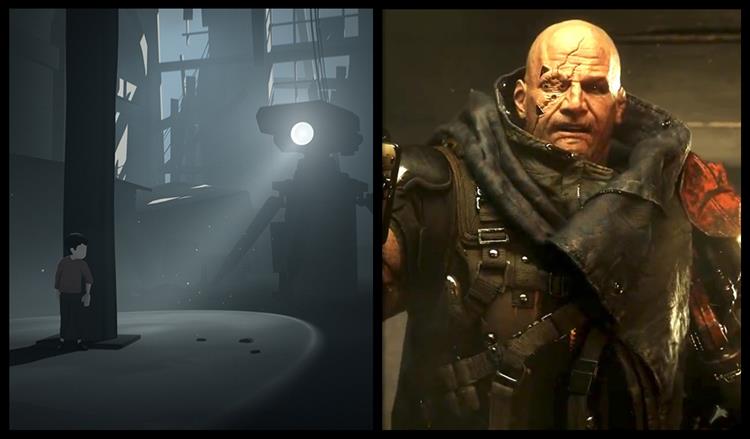