So, out in LA at the 2016 E3, Doritos has created a six-story arcade machine to promote the Doritos Mix Arcade. The arcade machine, the world’s largest, will double as both a stage for various acts (see below) as well as house a functioning 30 feet x 32 feet LED gaming screen with live arcade game play from a six foot arcade stick. It will also house an actual normal sized retro arcade with games, a lounge area, game demo stations and product samples.

I think it is cool as heck, and wish I was out there to partake. Check out all the details and lineup if you are heading out, as you surely won’t be bored. 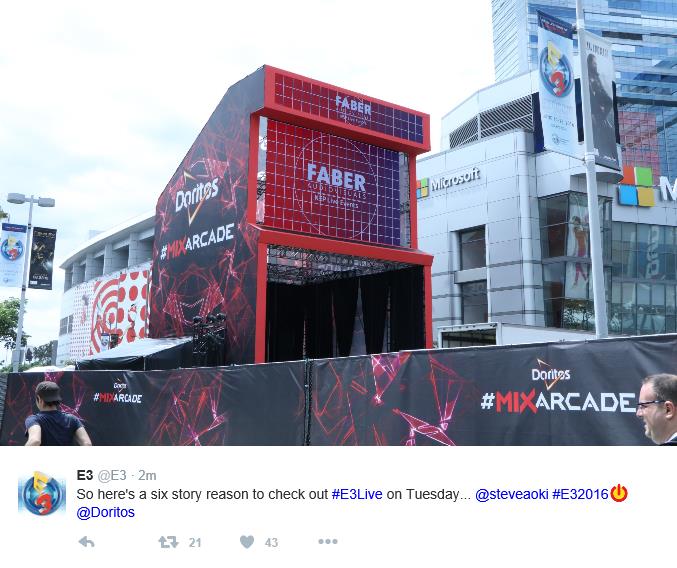 PLANO, Texas, June 8, 2016 /PRNewswire/ -- Never before has an arcade game created so much buzz. Doritos, one of the marquee brands from PepsiCo's Frito-Lay division, today announced a major presence at E3 Live during the upcoming Electronic Entertainment Expo (E3), the world's premier trade show for computer, video and mobile games and related products. The brand, known for its connection with gaming and music, revealed it will build the world's largest arcade game with a never-before-seen mix of music and gaming.

To bring the experience of one of its newest product offerings — Doritos Mix — to life, the brand is erecting the Doritos #MixArcade: a six-story, fully functioning retro arcade game that will combine the elements of technology, gaming and music in new and unique ways, including being controlled by fans onsite and watching live on Twitch, the world's leading social video platform and community for gamers. Working closely with E3 Live and Electronic Arts, the Doritos #MixArcade will further allow gamers to engage with both Doritos and their favorite EA games to level up in a bold, new way.

Located in the heart of downtown Los Angeles, the venue will double as a state-of-the-art concert stage during the evening and feature three nights of exclusive performances headlined by the likes of DJ Steve Aoki, rapper Wiz Khalifa, Big Boi of Outkast fame and more. No stranger to music, the Doritos brand has brought fans other exclusive concert experiences, such as the interactive Doritos #BoldStage at the South by Southwest (SXSW) Music Conference and Festival.

"Doritos believes creativity is unlocked when different influences are mixed together," said Jeannie Cho, vice president of marketing, Frito-Lay. "The Doritos #MixArcade at E3 Live — a new interactive venue for us to connect with our passionate fans — is a canvas for fans to create the ultimate live experience through a mix of technology, gaming and music."

With the #MixArcade, Doritos — a brand known for turning over control to its fans — will hand the reins over once again by giving fans the opportunity to level up their gaming experience by unlocking interactive elements throughout the music shows. Fans at the shows will be able to control various elements of the gaming experience and music performances using custom LED wristbands — from unlocking bonus content to launching special effects with a push of a button from their wrist. Fans can also watch the event live on Twitch (www.twitch.tv/doritos) where they can impact the show in real time by casting votes in chat for specific effects. The Doritos #MixArcade will be open to E3 and E3 Live attendees.

Steve Aoki Kicks Off the Festivities
Steve Aoki, renowned house DJ and 2013 Grammy Awards nominee, will headline the first of three nights of interactive shows, all with a wide mix of talent at the Doritos #MixArcade.

To announce his show, Aoki is inviting fans to set a Doritos Bold 50 world record for the "Largest Group Aoki Jump," encouraging fans to submit their photos of the well-known Aoki jump to www.DoritosBold50.com. To make his show truly interactive, as part of his performance on Tuesday June 14, Aoki will attempt to beat this record himself. The challenge is part of Doritos Bold 50, a year-long program celebrating Doritos' 50th anniversary and a continuation of the brand's "For the Bold" campaign launched in 2013, where fans around the world will be part of 50 world-record attempts.

"For me, as a lifelong gamer, playing at E3 — on a giant arcade stage no less — is a dream come true," said Aoki. "I believe in making bold statements through music, gaming and on Twitch. That's why this bold experience hits home."

The Doritos #MixArcade lineup is as follows:
Tuesday, June 14
• Steve Aoki
• "Bold Orchestra," a nontraditional orchestra made up of a bold mix of instruments and performers
• Empire of the Sun

Doritos #MixArcade
The Doritos #MixArcade, the world's largest arcade game, features:
• Size: Six stories, standing over 60 feet tall
• LED gaming screen: 30 feet x 32 feet, which will feature live arcade game play during the day and concert visuals during the evening
• Joystick: The fully functioning arcade game will have a 6-foot joystick
• Arcade within an arcade: Part of the venue will house an actual retro (and normal size) arcade room, with games, a lounge area, game demo stations and product samples. It will also feature custom arcade games designed for the space, including the "Mix-a-tron," a trivia game designed to test participants' video game and music knowledge, and a multi-game arcade machine that brings to life mobile games from DoritosMix.com into real arcade versions for consumers to play
• Twitch: Fans can tune into the concert livestreams at ww.twitch.tv/doritos
• Fans in control: Concertgoers will be able to gamify and control various elements of the shows with the push of a button from custom LED wristbands