First the trailer, now the details of Call of Duty: Infinite Warfare

Infinity Ward let loose with the reveal trailer for Call of Duty: Infinite Warfare earlier this morning, and now they have sent over the rest of the info for the game along with details on the Call of Duty: Modern Warfare Remastered. Some of the goodies from the release state that you will be able to pilot your own warship, introduces new weapons (duh, space), environments and inventive abilities for your character and near seamless loading times.

Per Eric Hirschberg, CEO of Activision…"This year, we're both honoring the heritage of Call of Duty while taking players to incredible new heights," said Eric Hirshberg, CEO of Activision Publishing. "Call of Duty: Infinite Warfare is a bold, new vision from the studio that created the original Call of Duty and Modern Warfare, and an adventure on an insanely epic scale that only Call of Duty could deliver. And Call of Duty: Modern Warfare Remastered is one of the most beloved games of all-time, reborn for a new generation. We have lovingly remastered it with a whole new level of graphical fidelity and realism that wasn't possible when the original was released. It's going to be a great year for Call of Duty players."

As for the Remastered CoD MW, it is being developed for current consoles by Raven and executive produced by Infinity Ward. The updated versions looks to boost the visuals, texture, lighting, animations, sound and basically everything about the game. It will include the full campaign including all missions, and have the online multiplayer mode including killstreaks, XP, Prestige and more. It only mentions 10 maps, specifically calling out "Crash," "Backlot" and "Crossfire." While the game is being touted an “included”, it doesn’t appear to be free, the editions of CoD Infinite Warfare that include the remastered edition of CoD MW start at $79.99, a full $20 above normal retail.  It was not stated if you can by the remastered edition standalone.

Call of Duty Infinite Warfare (along with MW Remastered) will be available on PC, Xbox One and PlayStation 4 on November 4th 2016. 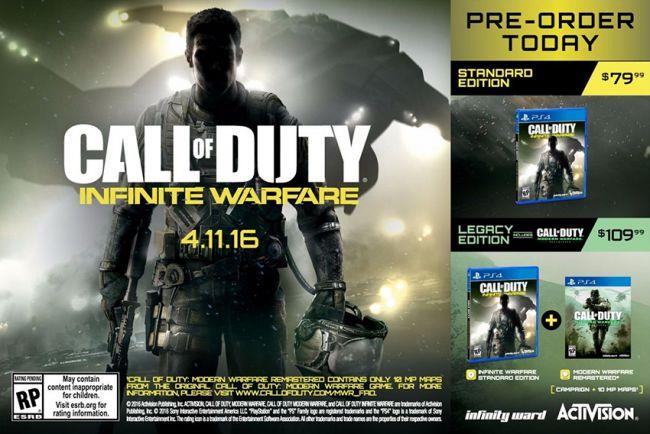