With the launch of the Oculus Rift, it's official: VR has arrived. Anyone—yes, you—can now turn their Xbox One into a dev kit (for free) and start making video games. Fallout 4's hardcore Survival Mode is in PC beta, wrecking players with illness and encumbrance and accidentally shaving everyone's hair off.

Russell Archey, Staff Writer, @NeoScyther
I'll be spending a good chunk of the weekend working on my preview of Portal Knights. Haven't put too much into it this week, as I've been working on my review of Out of the Park 17 and continuing my tradition of just trying to keep my team alive. Seriously, my owner's expectations for me with the Columbus Clippers this season was, "Don't suck completely." It's like the game knows me or something. Beyond that, I'll probably continue a bit more with Borderlands 2, as I'm finally nearing the level cap and can start preparing for Digistruct Peak. The major downside, though, is that I accidentally sold my Sand Hawk SMG. Not even sure how that happened, but I'll find a way to survive. Probably by farming a Hellfire off of Scorch.

Sean Cahill, Staff Writer, @seancahill24
I'll be splitting my time playing Ori and the Blind Forest: Definitive Edition as I try to remember how not to kill poor Ori 300 times in a playthrough. When I'm not guiding Ori through the Blind Forest, I'll be gunning down fellow Guardians in Iron Banner on Destiny as we bomb forward towards the April 12 update.

Sean Colleli, Staff Writer, @scolleli
Against my better judgement, I spent way too much money on Far Cry Primal during last weekend's Ubisoft sale on Steam. And even though it cost too much, I'm still loving it. I don't care if people call it a copy-paste, I've wanted an honest-to-God caveman game since forever, and I'm geeking out on this one. It's got hunting, it's got gathering, it's got crafting with primitive materials and three dialects of proto-Indo-European. Plus, I can turn a snarling hellbeast into an adorable, lovable kittycat that loves pet pets and eats raw meat out of my hand. Incidentally, I just realized that in 2016, voice actor Elias Toufexis gets to be the most primitive man (Primal's Mesolithic Takkar) and the most advanced man (Deus Ex's cyborg Adam Jensen). Busy guy.

Chapel Collins, Staff Writer, @ChapelCollins
Two of my favorite games were made available for me to revisit this week. The first is Dark Souls, which is now available for backwards compatibility on the Xbox One. I'm finally forcing myself to make a playthrough using something other than dexterity. More exciting, though, was Star Wars Rogue Squadron being added to Steam. If only it had been available on Steam at the peak of my Force Awakens hype.

Jeremy Duff, Senior Staff Writer, @Duff3c
This weekend is being dubbed "Barrel Roll Weekend" in the Duff household as I dive into both Star Fox Zero and Star Fox Guard. Unfortunately, there isn't a lot more that I can say about that until the embargoes lift for each game. I am also going to spend some time with Street Fighter V, checking out the recent updates that were added to the game, including the addition of Alex.

Charles Husemann, Editor-in-Chief, @chusemann
With The Division and Quantum Break wrapped up, I'm going to be diving into Day of the Tentacle Remastered and Ashes of the Singularity. I'm really hoping that Ashes lives up to the hype, as the technical features of the game seem to be getting all of the noise over the gameplay. Technical things are great—if you have a good game to go with it.

Randy Kalista, Staff Writer, @randykalista
My Fallout 4: Automatron review wrapped by the time you're reading this. I thought I'd Fellout as much Fallout as I could possibly handle. But Automatron hit the refresh button with even pulpier, refreshed ideas that touch on all four pillars of Fallout life: strategy, exploration, resource management, and role-playing. Something for everybody. Next up is my review for Catlateral Damage on PS4. My six-year-old likes it, though she'd (still) rather be playing Journey every chance she gets. Which means I, too, will be playing a little Journey, since she likes handing me the controller when things get spooky with the dragons. Hey, she's six. A lot of things are spooky for her. And, as "homework," I've reinstalled Crusader Kings II for the umpteenth time, trying to figure out what I'm missing here, and wondering why this game still gets talked about quite a bit, four years on.

Dan Keener, Senior A/V Writer, @zoboa
Back from vacation and back to playing some games and testing some equipment. Main thing is a little Plants Vs Zombies: Garden Warfare 2, along with a little Fallout 4 and Skyrim. Oh yeah, my son challenged me to some Rocket League in anticipation of the new basketball update coming out in the near future.

Rob Larkin, Staff Writer, @Rob_GN
I'll be in Austria through the weekend on a little holiday, so it will all mobile for me. Before and after I hope to get as much Iron Banner in on Destiny, but through the weekend it will be mostly Hearthstone. I do hope to get into This War of Mine; I just picked up the mobile version a week or so ago when it was on sale.

Matt Mirkovich, Staff Writer, @Stillmywords
OK, long list coming up and I don't know how to handle it. Here we go. Hyper Light Drifter, Final Fantasy XV Platinum Demo, Street Fighter V, Final Fantasy XIV, Croixleur Sigma, Nights of Azure, and Miitomo is slowly killing my phone battery. And then I got the itch to play Vagrant Story again. And supposedly I have two games coming in for review. Someone please send help!

John Yan, Senior Hardware Editor, @TheJohnYan
This weekend will see me dive into MLB 16: The Show as I review one of my favorite sports series on any platform. It'll get me in the mood for baseball starting soon. I might also find some time to do a quick run or two with friends in Diablo III and perhaps check out the closed beta of DOOM again. 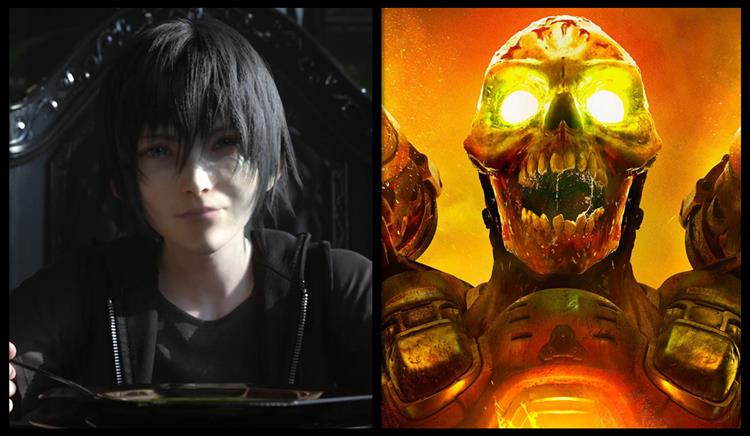